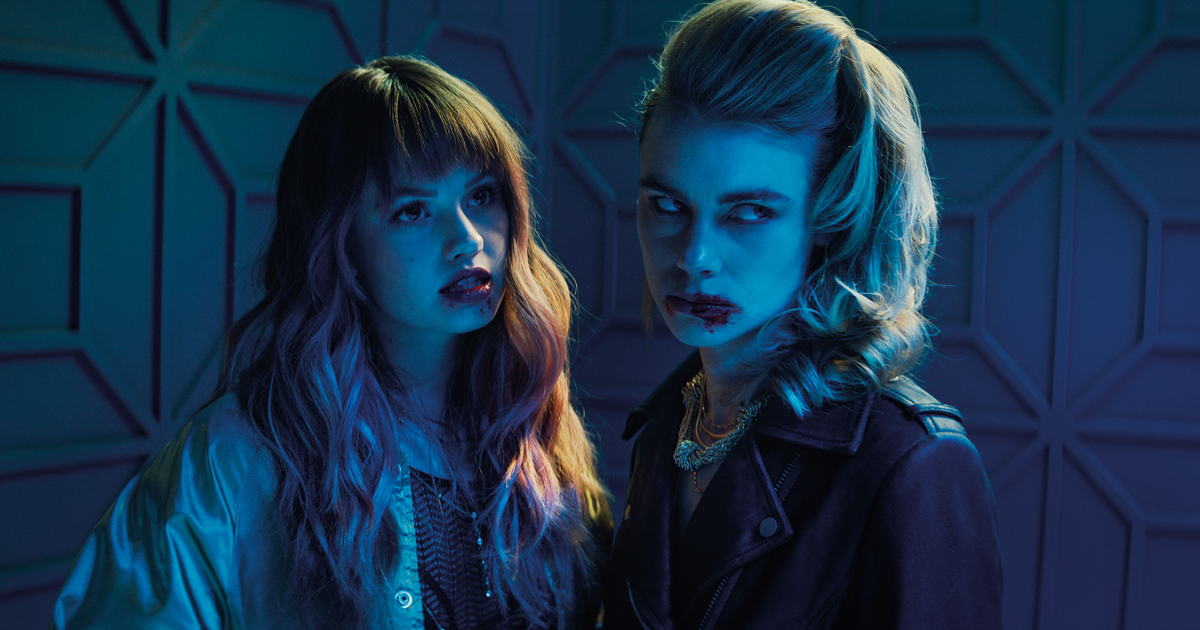 Night Teeth is the third project for the British duo of DOP Eben Bolter and director Adam Randall, following Level Up (2016) and iBoy (2017). Bolter describes this as the third iteration of fish-out-of-water stories, for which they’ve cultivated a strong visual style. The film chronicles a single night for our hero Benny (Jorge Lendeborg Jr), as he covers for his chauffeur brother. After picking up clients, Blaire (Debby Ryan) and Zoe (Lucy Fry), he quickly becomes embroiled in a high-octane, vampiric turf-war enveloping the length and breadth of Los Angeles.

We follow college student Benny, as he carts the undead henchwomen from party to party, and witnesses more action and violence than he’s seen in his short life. The team’s approach to Night Teeth is rooted in a deep love and understanding for cinema – references are numerous – which left room for experimentation on-set. Bolter explains that the director’s high standards and creativity kept him on top of his game during production. The aim was to elevate the narrative with striking visuals, always avoiding the boring or obvious. This often meant taking a seemingly unusual route through the challenges they encountered.

Bolter – a dedicated fan of Arri cameras – opted to shoot with the Alexa Mini LF, after deciding the Alexa 65 was too cumbersome for the job. This way, they could opt for large format, while also being able to perform agile camera work. “I’ve always shot Alexa, basically, for pretty much the past ten years. It has the best dynamic range and colour reproduction, and is the most cinematic digital camera. If I can’t shoot film, I’m going to shoot Alexa, full stop.”

To achieve an overtly photographic look throughout the movie – and a style that references his inspirations as a DOP – using anamorphic lenses was a no-brainer. He tested two of the Caldwell Chameleon Anamorphic lenses. While they do have a large format option, he opted for the Super 35+, which was actually slightly too small for the large format sensor. “We had to zoom in on the sensor by about 3%, which still kept us above the Netflix threshold for 4K.” He explains: “I wanted that because the lenses are sharpest in the middle, and towards the edge the focus just falls apart. It’s got this sort of watery quality that’s gorgeous, and I love all of the distortion. They’ve got the contrast and colour of a modern lens, with the flowering and distortion of an old-fashioned lens.” Though at first it may seem like an odd choice, deciding to use the smaller lenses only exaggerated the distinct aesthetic for which anamorphics are so fervently revered.

The daring use of colour throughout the film – lovingly paying homage to neon-noir goliaths such as John Wick and Blade Runner – was achieved by keeping it at the forefront of the minds of everyone on the production team, Bolter reveals. “A long time ago, Adam and I sat down with the script and went through it as colours. We wanted to plot out a visual journey for Benny and go down a rabbit hole – but avoid going too big, too soon. Initially, it’s elegant: moonlight and candlelight for the first party. For the second location, we introduce a blue neon to start to elevate it.” This, he explains, meant the whole production team – from costume to set – had a playbook from which to work. It also provided the framework to build on during production.

Along with planning the gradual ramp-up of experimental lighting, Bolter and Randall visually bookmarked the locations throughout the course of the film. This assists the audience in subconsciously understanding the physical world they’re seeing. Bolter explains that, although he was looking to be bold with his colour choices, he didn’t want the unconventional lighting to be purely stylistic and extraneous. There should always be an in-world explanation causing it.

“I’ve always been fascinated by cinematographers who are brave enough to wash the whole street in green light – and use colour in a really bold way. Me being me, I require some sort of motivation for the light. I’ve got to be a little bit grounded in reality.” For example, he would intensify the neon signs that peppered the LA skyline, or make use of a large green billboard to flood a street with light – rather than the ghoulish green moon in the world of Night Teeth. This results in a film that feels like it’s set in a heightened, hyperreal version of LA, rather than a cartoonish comic book universe.

In order to achieve some of these effects, Bolter got creative with LED and rear projection screens. The club was earmarked to be a blue and purple space, so we first see a large, purple neon sign outside. When inside, the DOP required creative ways to transform the space and, as stated, find environmental reasons for unnatural lights. “I didn’t want to use club lights only – I knew we needed something else to elevate it,” Bolter explains. “I love lighting with screens, and we decided that the club would have a kaleidoscopic flower theme. So, we basically made these screensavers that were moving flowers, and fundamentally all blue and purple. Suddenly, that’s a massive light source of those two central tones – and it’s all moving around.”

We ended up using two rear projection screens side by side, which made a 40x20ft ceiling

The shoot had foundational goals – to push the boundaries of what could be done, and be bold and brave with light. One such opportunity presented itself when the crew needed to one-up themselves, and make the VIP room even more stunning than the rest of the club. At first, Bolter sought to create a ceiling made purely of his beloved LED screens, but this quickly proved unviable. Not to be defeated, he chose a different route. “We ended up using two rear projection screens side by side, which made a 40x20ft ceiling that was like two cinema screens. Then, we had two projectors behind, and I essentially lit the room with just that.” But it wasn’t enough to create a flurry of floral above the cast, he continues. “We made the walls of the room a reflective material, and made sure the floor was almost like a mirror, as reflective as possible, so that every surface is undulating and moving.” This, again, is rooted in what one might find in a real VIP room, but the dancing colours have an ostensible dreamlike quality. It really gives the viewer the sense that Benny’s concept of reality is being tested over the course of the night.

Due to the nature of the narrative, a daunting 30% of the script takes place in a car. Constraints such as these can often be a frustrating and debilitating challenge for DOPs. It limits options for camera angles, and restricts opportunities for dynamic, interesting visuals. Bolter and the team tried to liberate themselves from these limitations, elevate the narrative and, of course, have fun. “We broke it down into scenes we felt had to be done on location – so we could be outside of the car, using the world and the reflections,” he explains. “For scenes where we could be in the car, it would be more about interesting angles. We actually shot four days in LA, but on a sound stage using LED screens.” The irony is not lost on Bolter – spending time in LA, shooting a film set in LA, but tucked away in NLAB (Netflix’s own sound stage), rather than using its beautiful locations. 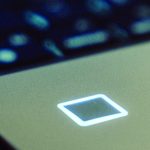 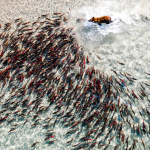