DOP Matt Gray talks uncovering the secrets beneath the surface in the BBC’s submarine thriller, Vigil

From the makers of Line of Duty and Bodyguard, World Productions brings us Vigil. A suffocating and mysterious thriller set aboard the HMS Vigil – a fictional military submarine, which is down one crew member after a death on deck. Suranne Jones heads up a terrific cast as DCI Amy Silva, who’s tasked with exposing what really transpired under the water. But, given it’s a six-episode, hair-raising thriller, there’s more to this case than initially meets the eye, and Vigil is full of slick twists and turns.

The drama was penned and created by the twice Bafta-nominated screenwriter Tom Edge (Judy, The Crown), with James Strong directing and Matt Gray in charge of principal photography. Strong and Gray forged a close relationship after working together on Broadchurch in 2013 – a connection which would have, no doubt, prepared them for the creative challenges faced in bringing to life the claustrophobic, high-pressure HMS Vigil. 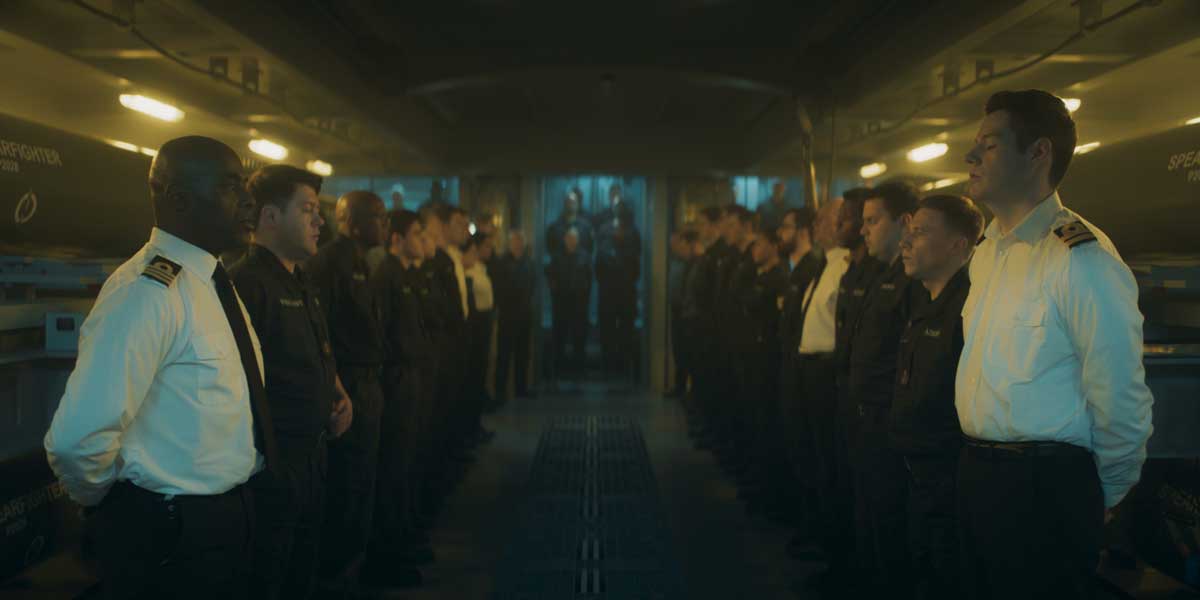 “From conception, Vigil was a very bold and ambitious project. In the first 20 minutes, we see our hero DCI Silva in a helicopter being winched down onto the submarine – our setting for the series,” explains Gray. “For the whole show, we challenged ourselves to do as much in camera as possible. Bringing on three post-production companies (Blazing Griffin, Goodbye Kansas and Savalas) as partners early in the process was crucial. For Amy’s journey to the sub, we shot ship-to-ship plates of the helicopter, then added the extra elements of her on the winch and the conning tower, which were all seamlessly blended together.”

Real ballistic missile submarines are swathed in secrecy, and civvies are generally forbidden from tours of their interiors. The design, therefore, had to be constructed from a mix of former submariners’ memories and scouring the internet for similar vessels. While HMS Vigil did require some VFX, it was mostly the handiwork of Tom Sayer – a talented production designer who worked and reworked the set to ensure the cinematography could be as dynamic and gripping as the story itself.

“We did some testing in the submarine set with our Steadicam and B camera operator Martin Newstead, but some adjustments had to be made so that the Steadicam was able to take full advantage. We wanted the camera to be constantly moving and flowing through the environment – never letting it get too static, not to distract from the pace of the story,” says Gray. “We [Gray, gaffer Paul Jarvis and best boy Paul Bates] also worked with Tom to integrate a full range of Astera LED tubes into the set – and that all went back through a DMX, to be managed via tablet. This gave me complete control over every source on the sub – I could envision quite complex lighting changes.”

Lighting choices on the submarine were driven by its mythical ability to descend below the surface for long periods of time. Since ballistic subs are nuclear powered, they theoretically have limited endurance – though, in practice, last 90 days at sea, due to finite food stores and depleting crew stamina. This was also the case for DCI Silva’s journey.

“We wanted to play with opposing colour tones throughout the series, because there’s also the investigation that takes place back on land. For that, we leaned into tones that were representative of the real world and relied on natural lighting,” comments Gray. “In the sub, the tones are very acidic and man-made.” 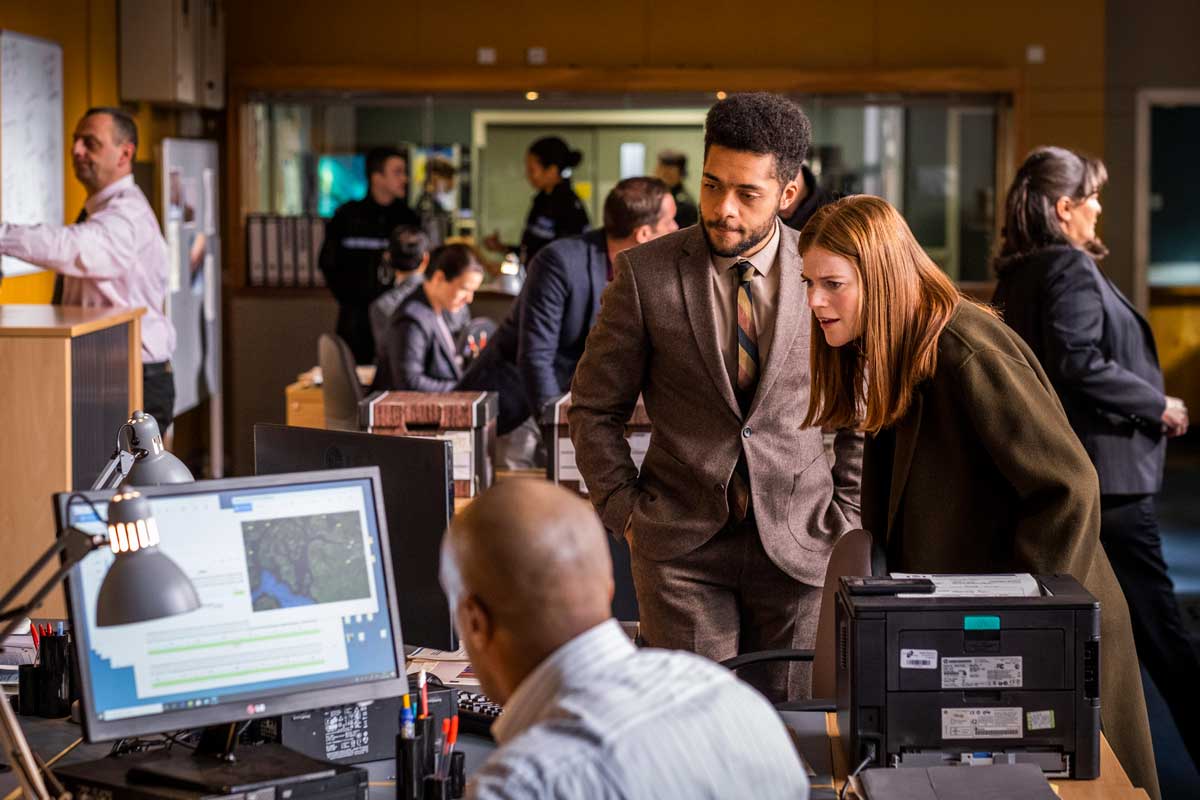 The decision to split the narrative between the sea and terra firma was indisputably wise. Had Vigil only unfolded within the submarine, the sense of claustrophobia could have become overwhelming or lost its edge. Photographically, this is done exceptionally well, with Gray switching up his lenses to minimise the anxiety of a drama predominantly set underwater.

“I initially thought I would use spherical lenses in the submarine and anamorphic on land, but separating them like that was too obvious. To me, it made more sense to mix them up based on different intensity cues in the story, whether on land or in the submarine,” says Gray. “I had a set of Tokina spherical lenses, which I used for a good chunk, as it allowed us to compress things and not make it feel too wide. These lenses also have a slight period feel, because they only have one coat on the front. They are much more interpretive than anamorphics, which we used to open the space up a bit.”

A set of Arri Master Anamorphics was used to illustrate the expanse of life on land, but also the magnitude of the sub. Gray explains: “These nuclear boats are enormous; they’re one and a half football pitches long and 12 double-decker buses deep. We wanted to be able to show the reality of that.” He adds: “Along with the Master Anamorphics, we employed the Kowa 75mm for our main storyline.”

The lenses were paired with an Arri Alexa LF, because of the 4K HDR constraint from the BBC. But more than that, the camera’s sensor was able to hit Gray’s visual requirement for shallow focus and a fall-off around the frame. “I could get near to the actors on the set, which was to be expected in a close-proximity subterranean environment, but it was never as sharply realised, due to this effect from the sensor,” he says.

This was the the DOP’s first HDR project, although he has subsequently contributed to another – also by World Productions – called Showtrial, airing on BBC One later this year. In 2019, colourist Colin Brown worked with Gray to discuss the look and create the show LUT, but the process was put on hold due to the ongoing pandemic restrictions – the first episode only reached the grade suite in November 2020.

“Working with Colin early on was fundamental in setting the colour palette and tones for the submarine interior. We did camera and grade tests before filming. It was important to see how the set and lights would look on-screen – and, since all the lights were integrated into the set, we could choose the tone and luminescence levels before the footage made it into the grade,” explains Gray.

“I’m yet to have this confirmed, but I’m pretty sure the BBC is making the HDR version available. Using the ACES colour management system, we were able to go through the SDR and HDR alternatives to ensure they worked as one – Colin did such a great job, it looks really wonderful.”

Vigil was a colossal project, with multiple locations to suit the complex plot. As Gray concludes, it was a collective labour: “It couldn’t have been achieved without such a fantastic effort from cast, crew, VFX teams – and also, second block DOP Ruairí O’Brien.”

This article first appeared in our October issue of Definition magazine. 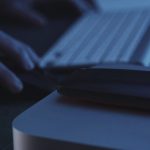