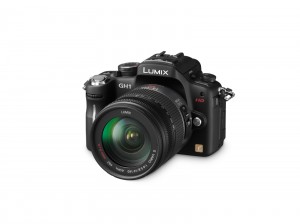 Capturing the Zeitgeist is vitally important for any company involved in modern technology. Some companies manage it very well, presumably baiting snares with the kind of slightly smelly young people that Zeitgeists like to consume. You’ve seen the kind in the pub – too much hair gel, jeans that show their designer underwear and such poor diets and personal hygiene that they’ve had to smother themselves in Lynx. Canon and Nikon obviously have snarling Zeitgeists caged in some basement in their research labs – as the D90 and 5D Mk II have shown – and now it’s the turn of Panasonic, who may not actually have a Zeitgeist of their own, but certainly know a good bandwagon when one passes.

When they first launched their Micro Four Thirds stills camera, the G-1, it didn’t record video but, with a few tweaks, the GH-1 was born bringing full 1920×1080 25p capture, or 720p at 50fps (ooh – slomo!). The Micro Four Thirds architecture was originally created by Olympus and Panasonic to create compact stills cameras with interchangeable lenses. They look like a conventional SLR, but don’t have a pentaprism – the eye level viewfinder is an LCD – removing the need for a mirror which means less weight, smaller bodies and, because the sensor is further forwards, simpler lens design. The active size of the sensor is 17.3mmx13mm – about half the size of the 5D Mk II’s.

The kit lens is a 14-140mm f/4.0-5.8 – a bit slow for my taste. Note that the sensor size makes that equivalent to about 28-280mm on 35mm. There is excellent optical image stabilisation built into the lens, which is active during video capture, and a proper mechanical zoom ring, though the focus ring is a horrible endless encoder. The O.I.S. and autofocus are very quiet – vital as the GH-1 has a stereo microphone just in front of the hotshoe. If you want better sound, there is also an input for a stereo mic, on a 2.5mm jack. There is also a mini HDMI connector for video output though, bizarrely, it outputs live video but goes blank if you start recording on the camera. It’s worth pointing out though that the review model was a pre-production unit (in a horrible gold colour that won’t be an option in the UK).

EU import duties limit the GH-1’s video capture time to 29 minutes and 59 seconds, as anything that can record 30 minutes or over is considered a video camera and hence subject to tax. The GH-1 records AVCHD or MJPEG to affordable and ubiquitous SDHC cards – a 4GB card will hold the maximum record time, then just slot in another card for another 29’59”. Where the GH-1 really scores is in the full manual video control of video capture. You can set ISO, aperture and shutter speed, as well as being able to use the ‘film effect’ settings of the camera (standard, vivid colours, black and white, soft contrast etc.).

The GH-1 has an excellent 3in flip-out LCD and high resolution eye level viewfinder – there is even a sensor so that when you put the camera to your eye it turns off the LCD and enabled the EVF. The controls are fairly logically laid out – the GH-1 has a dedicated video record button on the back but most of the other controls are identical to the G-1. The manual control of shutter speed and aperture is on a wheel below the shutter release – very much like both Nikon and Canon, though using it whilst filming does make a noise that can be picked up by the on-board mics. Overall though, it’s surprising how good the handling is for a stills camera re-purposed to shoot video. I tended to use the EVF whenever I could, for the extra stability it gave me. In this traditional SLR pose, your right hand rolls the camera and controls exposure (there’s no zebra, but a histogram is available) and your left controls zoom and focus. As a long-time SLR user I found this really comfortable and intuitive. If you need a low or high-level shot, just flip out the LCD and the GH-1 does a pretty good imitation of a Handycam. Although the focus ring is an endless encoder, the action is smooth and pretty predictable – the zoom, however, is a different matter. There’s no servo for the zoom, of course, and the ring’s friction makes really hard to manage a slow, smooth transition. Autofocus was a bit hit and miss, though the GH-1 features Panasonic’s face recognition technology, which works amazingly well. If you want a ‘full auto’ approach, the GH-1 also has Panny’s Intelligent Auto mode, where the camera recognises which one of its Scene Modes would best suit the current image and automatically sets it. Point it at a person and it selects Portrait Mode, smoothing skin tones and focussing on the face – push the lens up to a flower and the camera flips in to Macro mode. It sounds amateur, and is, but it’s clever technology and works surprisingly well. Auto exposure also works very well – you can use aperture or shutter priority in movie mode as well as full manual and program auto exposure.

In general, the GH-1 handles well as a ‘Handycam’ style video camera – a big surprise given its DSLR form factor. The menus are excellent as well – there are detailed menu settings but most of the items you need to change quickly are available in a sensibly named Quick Menu. Check out www.hdusermagazine.com for a video of the menus related to movie mode. The big question, then, is what the images look like.

The sensor is much smaller than that of either the D90 or, especially, the 5D Mk II, and the kit lens has a small maximum aperture, so you are never going to get the gloriously low depth of field that makes the 5D look so fine. Nevertheless, compared to a palmcorder the sensor in the GH-1 is pretty big. Images are smooth and tonally rich and colour accuracy and saturation is also excellent. Remember that the lens is designed to resolve 12.1Mpixel stills  – it’s not the best lens in the world but resolution is excellent for HD video. The big let-down, unfortunately, is the video compression. Although the GH-1 has a processor specifically updated for video compression, fast moving images show strong compression artefacts – I mean really strong – as in “What the hell?”. Filming a Turkish dancer whirling a shawl through frame caused the image to break up into almost unrecognisable chaos, though results improve if you reduce the shutter time. There’s none of the ‘jellycam’ shutter roll that plagues the D90 – the problems seem to be entirely down to the AVCHD compression. Keep the scenes reasonably static, however, and you’ll be very pleased with the results, and the ability to shoot 720p at 50fps is pretty cool.

I was truly surprised at how comfortable the GH-1 was for shooting video. The current high street (meaning, of course, Internet) price for the body and lens kit is about £1200-1300 which puts it up against some of the upmarket AVCHD palmcorders. There’s a delicious irony, therefore, that probably the best AVCHD palmcorder you can buy is a stills camera. 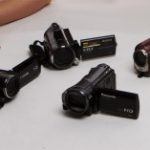 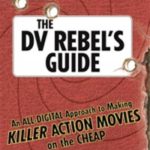 My theory is that, a few years ago, Blackmagic Design realised that Resolve was...

The VariCam LT is the smaller and cheaper version of the 35, but as...
Read Here