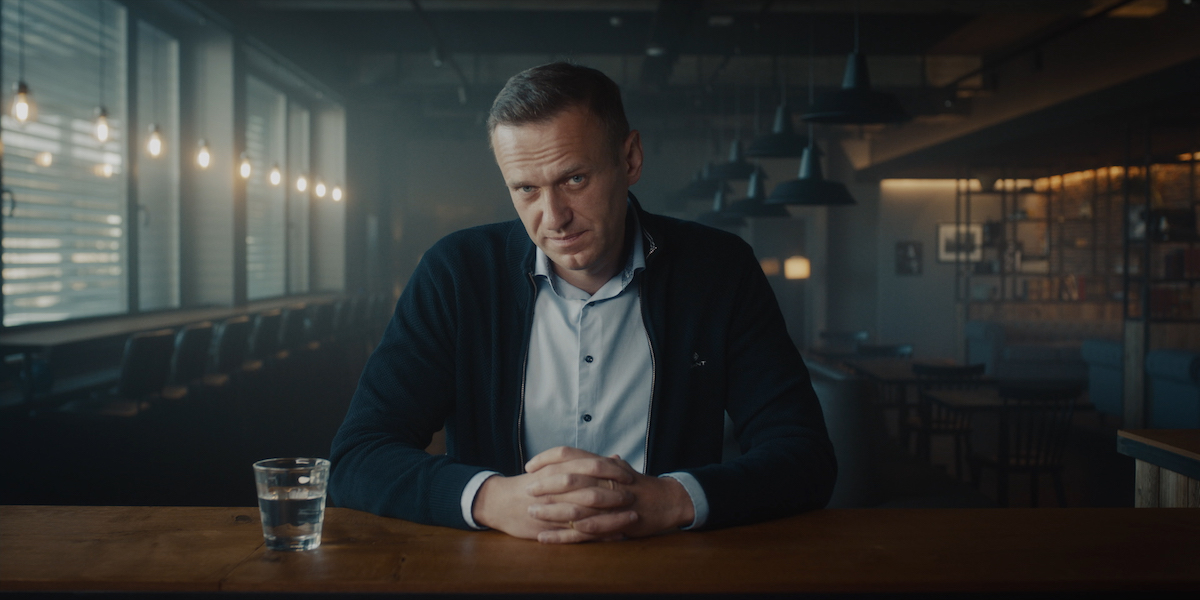 With Navalny, Niki Waltl pairs thrilling subject matter with cutting visuals fit for cinema. However, this tale is grounded firmly in reality

An alleged assassination attempt of global importance, a twisting investigation and an unfathomably fearless hero. Were it found within a novel, it would be compelling enough – but the story of Navalny was not concocted to satiate eager readers. More chillingly, it’s all perfectly real.

Before the documentary hit screens earlier this year, its story had already shaken the world. In fact, unbeknown to viewers at the time, the now-infamous news segment depicting the moment Alexei Navalny spoke directly with his would-be killer was part of a larger human drama. The film’s subject matter is, perhaps, of once-in-a-generation magnitude. When it came to the all-important matter of presenting events in a compelling visual language, the responsibility fell to Niki Waltl.

“After he woke up from his coma, Navalny reached out to Bellingcat, the platform of investigative journalists, to see if they would tell the story. Christo Grozev took an interest,” Waltl begins. “He was already working on another documentary with Daniel Roher, our director. When the film team realised Grozev and Navalny had been in touch, they thought, who’s making that film? Everyone involved knew it would be a very interesting time to have cameras around, so it just clicked.

“I was a bit intimidated, because you don’t know what to expect, but also curious,” the filmmaker recalls. “Even though it was the height of the first Covid-19 wave back then, this poisoning case really came through on the news. Everyone was touched by that story, myself included. When you’re around these people, it puts things into perspective. Mr Navalny, his team and Mr Grozev – their energy and motivation are infectious. All you can do is move forward, start an incredible project and feel lucky to be a part of it.” 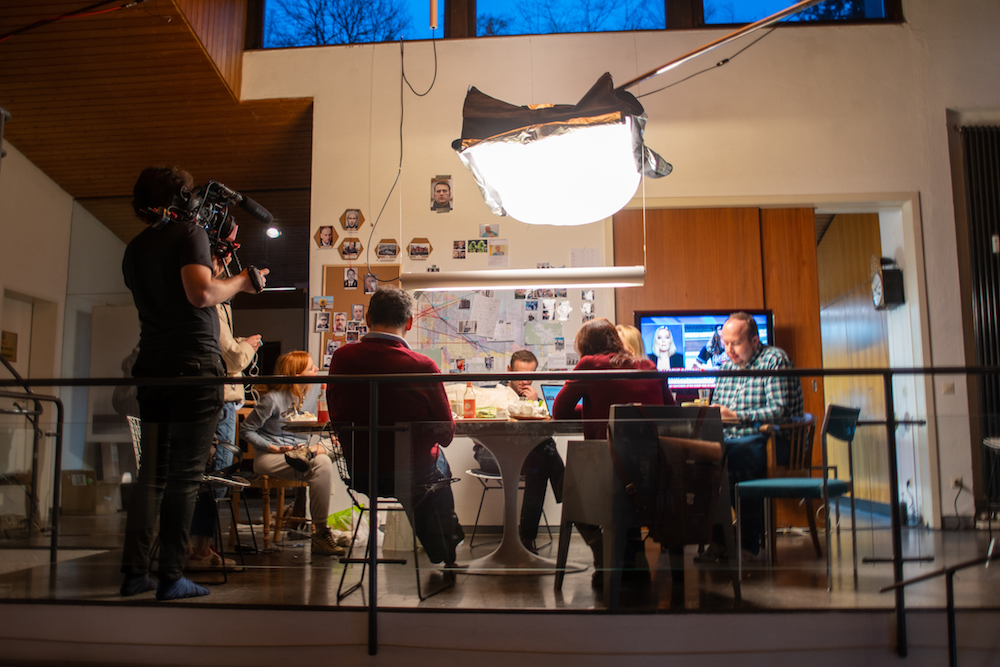 FLY ON THE WALL | The crew largely shot on a Red Gemini mounted to a shoulder rig. The intention was to attain a cinematic look without getting in the way of Navalny and his busy team

Navalny’s beating heart is an enthralling interview with the titular figure himself. His message would have carried weight on any platform, but framing this rare chance correctly was essential to delivering maximum impact.

“In general, I see it as my job to make something cinematic,” Waltl confirms, addressing the documentary’s distinctly crafted aesthetic. “Daniel and I wanted to tell the story more like a fictional film than typical documentary. A word I don’t like so much, but one that describes the look quite well, is ‘thriller’. That informed our interview.”

While many moments were beyond the crew’s control, an interview could be meticulously planned.

“We took time to scout and carefully light the scene, because we knew this would be special – probably the most special interview I’ll shoot for the rest of my life.

“We were out in the Black Forest and lots of places were closed down due to the pandemic. We ended up with a bar. The idea was to position Navalny at the bar, then give the viewer a perspective of the listening bartender, to create an intimate feeling,” he recalls. “Navalny is looking directly into the camera, which isn’t a classic interview approach, but in the
end worked out very well.”

Further intensity was added with a wide-angle lens, close to the subject. It’s as close to reality as the medium permits. 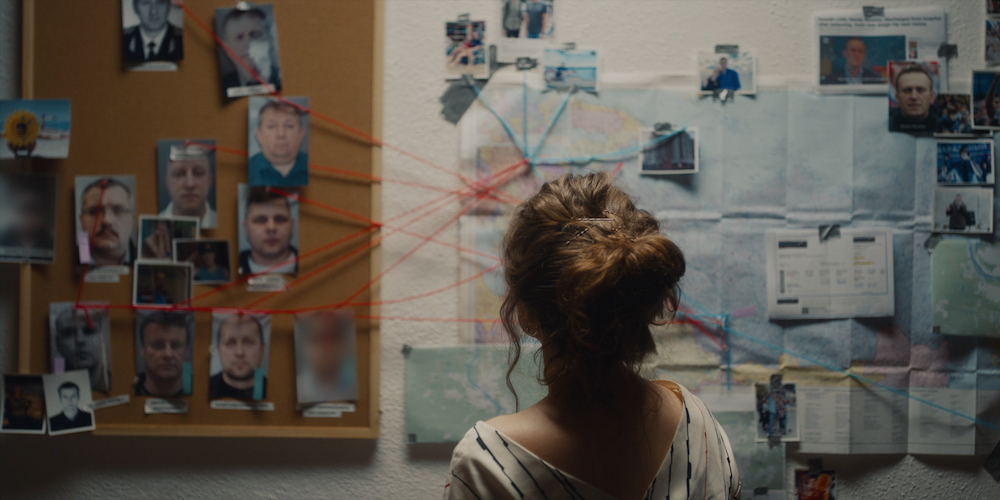 “For lighting, we wanted it moody, so we ended up taking a lot of natural light away,” the cinematographer continues. “Alongside the negative fill, we kept some practicals in the room for depth, then lit Navalny mainly with one big source.

“I’m not one for three-point lighting, I think that’s old-school these days. I create something large, natural and soft – in this case, an Arri Skypanel with octabox and Snapgrid to add a bit more directionality. We also had a Kino Flo – just one tube – to wrap around his face a little more. It was relatively stripped back, but quite meticulous in its simplicity.”

Camera choice had to be practical. In non-fiction, there can be no second takes. All coverage had to be collected in a single instance. Beyond a four-camera set-up, Waltl relied on supremely high-resolution footage for further options.

“I own the Red Gemini that we shot most of our vérité scenes on. Then you want to stay in that look. So, for the interview, we rented extra Reds,” Waltl says. “We wanted 8K for the A camera, so used the Monstro. B, C and D were all Geminis recording 5K.

“We simply needed as many good angles as possible. With classic framework, the A camera remains in a medium shot – but 8K gives you the possibility to cut a much tighter frame from the same camera. You essentially gain an extra perspective.

“That level of flexibility wasn’t needed on all four cameras and, being slightly in the middle of nowhere, the added data would have become a burden. Native 5K was the resolution sweet spot for me.” 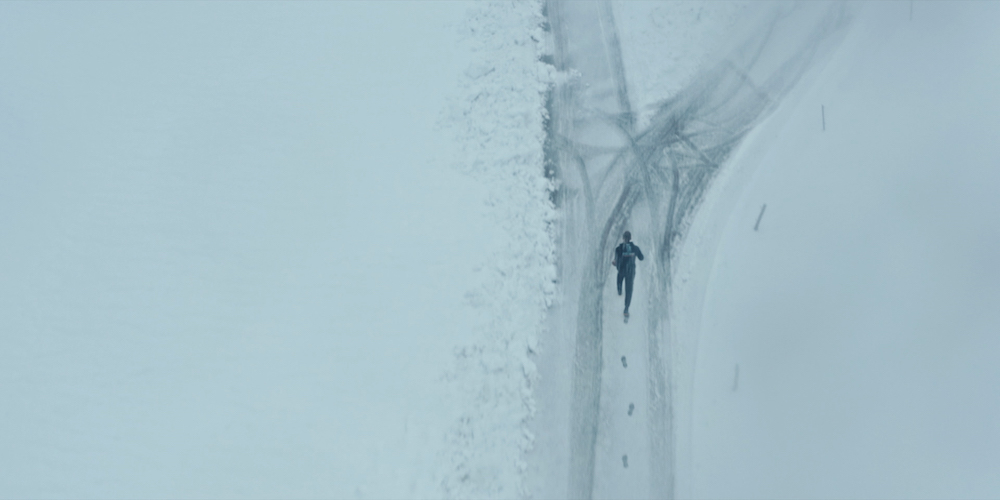 Other moments were not subject to the same level of control – such is the nature of rapidly unfolding real-world events. With a strong desire to remain within the cinematic wheelhouse, Waltl had to concoct simple and effective solutions.

“The story of this film is crazy, but ultimately, it often revolved around the subjects talking to each other. It’s not as easy to make that look as awe-inspiring as it should,” he reveals. “Those investigative scenes actually took place in the home Daniel and I were renting. It was the best space we had available, but after shooting one conversation, we realised the lighting wasn’t good. So, we rented a Chimera Dome and boomed that in on a tripod, over the table. It didn’t have to be sophisticated, but it did fulfil our desire for a more flattering setting.”

Once again, the Red Gemini proved itself a considered choice.

“I personally like working with an Easyrig, because you can get into all different positions without any physical demand, but it would have been intrusive during these moments. Very simply, we put the small Gemini on a shoulder rig with a viewfinder and got to work. Unusually, we decided to shoot it all on prime lenses, in line with our narrative look. Our go-to choices were from my own personal set of Sigma Cine lenses – 40mm on the A camera and 85mm on the B camera.” 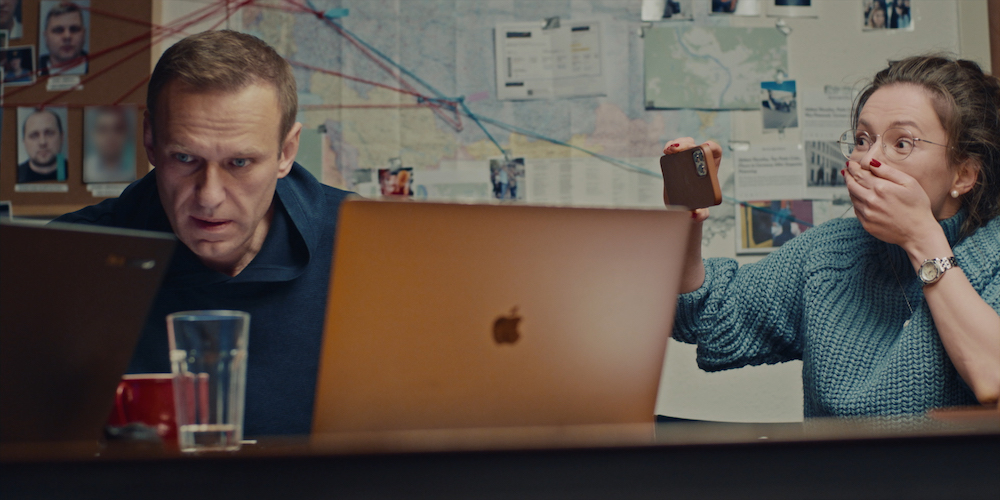 EARTH-SHATTERING EVENTS | This true story feels like a fantastical spy thriller – thanks to both an unbelievable sequence of events, plus cinematic techniques employed on the fly

Navalny’s climactic sequence was captured in these exact circumstances. What began as an innocuous detour became global news. Unsurprisingly, it’s one of Waltl’s most distinctive memories from production: “Bellingcat found details of the assassins that attempted to kill Alexei Navalny. I suppose it’s quite a famous moment now,” he muses, “but he sat down and called them. Because of time differences with Moscow, we began the scene at 4am. We didn’t think anything would come from it.

“The cameras are rolling, Alexei calls the first man and says, ‘Hello, this is Alexei Navalny, why did you decide to kill me?’ And the assassin hangs up. The same process happens a second time. On the third attempt, Alexei decides to change his approach. He acts like he’s a Russian general and says, ‘Tell me everything. What went wrong? Why is nobody dead? I want information.’ And the man buys it. He spills the whole story in a 45-minute phone call, confessing all the details of how they tried to poison him. I don’t understand a word of Russian, but when you see jaws dropping to the ground, you can sense that something unbelievable is going on. I was simply hoping my camera wouldn’t run out of battery.”

The sequence raised an interesting production conundrum. What had undoubtedly become the crux of the documentary was also important news. It didn’t take Roher and his on-camera companions long to reach a conclusion.

“There were discussions between the journalists, thinkers and filmmakers about what to do with this footage. It was clear that this would be gold for our film, but on the other hand, it was such a political bombshell that some had to be released, journalistically, to TV stations. It should be news for people to see immediately. Quickly, everyone understood that, yes, part of this phone call had to go out.

“I remember a couple of days later, I turned on the news and saw footage I’d filmed in the very room I was in. It was the right decision,” Waltl concludes. 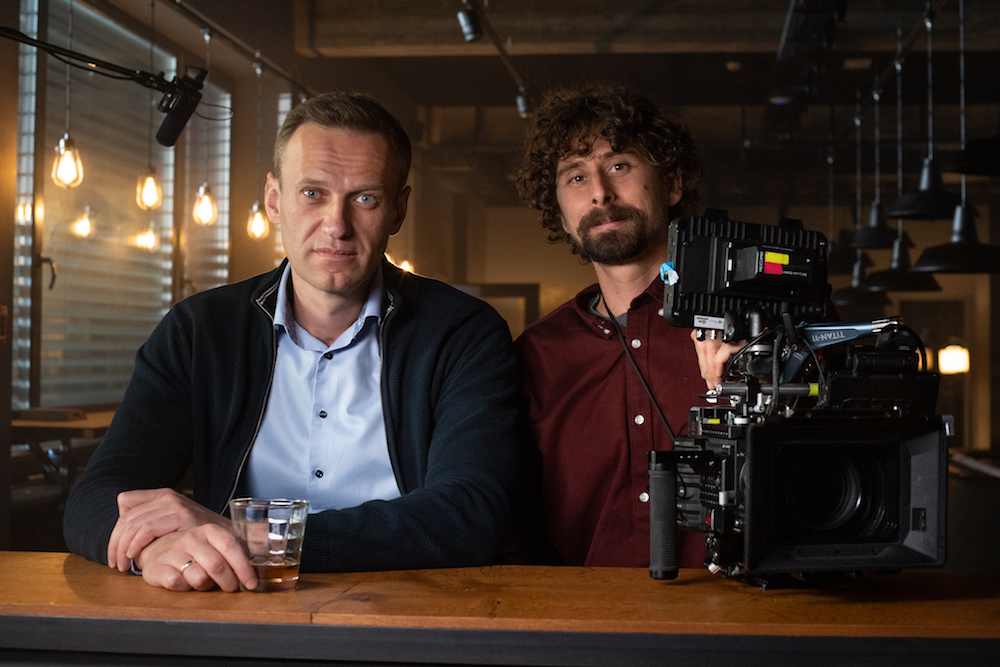 SETTING THE SCENE | Navalny with Niki Waltl, at the location used for the bar interview. The closest thing to a set piece in the film, Waltl and director Roher were meticulous in the scouting and lighting for this scene in particular

Incredibly, Navalny doesn’t end there – nor does the staggering real-life journey of the film’s protagonist, post-credits. At the time of writing, Russian courts have just rejected an appeal on his sentence. As he serves close to a decade in a high- security penal colony, Alexei Navalny continues to share his bold ideology in print. Were it written for the screen, the hero would walk away unscathed. One can only hope this true tale reaches an equally just end.

Navalny is available to rent on multiple streaming platforms 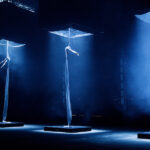 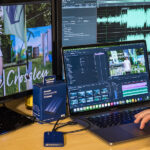