RED Turns Up The Heat With HDRx and Magic Motion

A still from the use of HDRx from RED.comRED’s new HDR approach could just impress you. (image: https://photographynews.co.uk/def-demo/wp-content/uploads/2010/10/1286274050.jpg)

Over at red.com, the company’s founder, eccentric billionaire Jim Jannard has shown some new results that could justify his company’s endless delays in bringing their Epic and Scarlet lines to market.

Red promises increases of up to six additional stops of latitude with the new technology, that’s over and beyond the 12 or so stops native to their sensors.  This expanded range will now be standard on Red cameras and available to all Epic and Scarlet customers.

Could this be the end of blown out highlights?

Film has been the gold standard of image capture up to now where 15 or even 16 stops are possible, albeit at a premium cost and with associated drawbacks such as graininess, scratches, dust, hairlines, and mishandled lab processing among others.

However, if Red delivers, as it has publicly committed to do, then the goal posts are now moved up to 18 stops of latitude, with on-the-fly adjustability.

The response over at reduser.net was predictably celebratory.  It always is, there.  Many went so far as to repudiate a ‘no vote’ on a recent poll [link to results: http://www.reduser.net/forum/poll.php?do=showresults&pollid=234] as to whether an extra $1000 should apply to the new Scarlet series, in order to include this HDRx upgrade.  The rabble now appears to want it, nearly unanimously.  This support is directly tied to the new sample images and test videos.  Another impromptu HDR video can be downloaded here [http://red.cachefly.net/17hx.mov].

In a double-whammy, Red has also announced its ‘Magic Motion’ post processing feature for its HDRx footage that allows the post/editor to ‘dial in’ custom motion blur characteristics and apply them to each HDRx clip independently.

For those unfamiliar with HDR, this approach basically takes two exposures and combines them into one image. The brighter exposure lifts up the dark areas of the image while the darker exposure protects the bright areas from overexposing and turning pure white. For motion, this presents a fundamental problem.

Two different exposure times of the same moving subject will produce two different blurs, and they will not match each other precisely.  This is because the shutter is open longer during the brighter frame and shorter during the darker frame.

Red has found a way to interpret the motion blur characteristics from each of the two frames, and then blend them together with user-control.

Red has found a way to interpret the motion blur characteristics from each of the two frames, and then blend them together with user-control.

This can be seen in the twirling stick across the three shots.  Each shot is the identical moment in time captured with HDRx and then combined using Red’s ‘Magic Motion’ algorithms to achieve three different blur characteristics.

No one else on the market has been able to offer this.

ARRI had announced an increase to their dynamic range for the Alexa.  However, searching the D-21 Alexa Specification [http://www.arridigital.com/technical/cameraspecs] at their website oddly turns up no dynamic range claim at all.  An early press release [http://www.arri.de/press/press_english/press_release.html?tx_ttnews[tt_news]=466&tx_ttnews[backPid]=1781&cHash=6f78b0dd41] stated,

“…ALEXA’s new Super 35 format sensor delivers amazing images with a base sensitivity of EI 800, low noise and an unsurpassed dynamic range of more than 13 stops.”

The Alexa’s resolution tops out at 2K, and its “unsurpassed” DR may have just been surpassed, and then some.

In terms of pixel count, the 3k, 4k, 5k and 6k offerings from Red should produce superior image clarity, once they are finally released.

The cliché term “game changer” has been bandied about almost non-stop these past few years.  Unfortunately, this time it might actually be applicable and warranted.  Dynamic range at this extreme eliminates the need for a lot of watts of lighting.  Cinematic lighting will always be crucial for achieving specific looks, but this capability opens up a world of possibilities to the low-budget filmmaker, documentarian and news gatherer.  Natural light becomes a very real option, and enhancing a naturally lit shot with a minimum of bounce or fill becomes much easier, less power intensive – and cheaper.

These first few samples have been alluring, enticing, but inconclusive of course.  No one knows when they’ll actually be able to press the record button for themselves, except for Jannard and his crew.

But, download the “Ghost Town” clip (http://red.cachefly.net/walk.m4v)  for yourself and consider the possibilities.  These are exciting times.

Joe Giambrone is a former webmaster and support technician at Eizo Nanao Corporation. 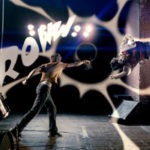 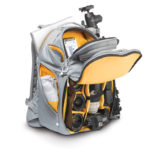