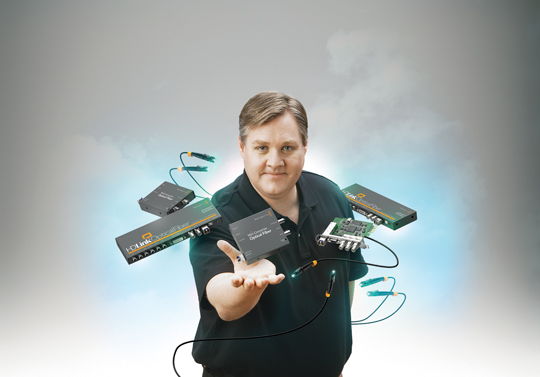 Posted on May 5, 2010 by Definition Magazine

Grant Petty, MD of Blackmagic Design with a few ‘floating’ fibre productsHave you ever thought of using fibre optic cable in your production environment? Overkill? Cost too much? Well Grant Petty knew you would say that and has some ‘come back’ for you. His company Black Magic Design has just started shipping video  production gear with fibre optic connections in mind. Here’s his thinking…

“Copper cables and BNC connectors aren’t really used by anyone except television people now so they’ve got to be laid in by a specialist installer or system integrators. We thought ‘We wonder if we can use fibre optics?’ The SMPTE standard specifies fibre optics cable with LC type connectors and that’s the same connectors used on networked computers. So we thought if we could use electricians to run these cables it’s going to be much, much cheaper. But then the problem is that fibre optic equipment is expensive, the converters that take SDI to fibre optic were thousands of dollars. So we decided to make a much lower cost version of that converter, which we did and that’s the Mini Convertor Optical Fiber and it converts to and from fibre optic simultaneously and it’s only USD$495.

“Then the other thing we thought we’d do is incorporate  the converter into other equipment which brings the price down even more. So we’ve got the HD Link Optical Fiber which is really an HD Link Pro but with a fibre optic connection built in to it. It was released at the same price as the old HD Link Pro. So its basically free to get the fibre optics. Then we thought we’d build an editing card with fibre optic built in as well so we did the DeckLink Optical Fiber and that’s again USD$495.

The great thing is you can buy those optical fibre cables at your local electrical wholesaler. There they’ve got fibre optic cables with LC connectors on the shelf. The cool thing is with networking you need bi-directional, in video we don’t actually need that we just need to connect from point to point so these cables you buy off the shelf at the wholesaler you can actually un-clip the ends and break them apart and get two cables for the price of one.

We got a drum of one kilometre single mode cable for USD$600. It was bi-directional so effectively it was two kilometres, and you just get the electrician to terminate if for you. 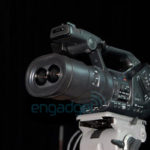 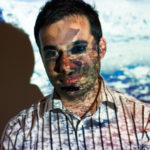