Sport is among the most demanding fields of live broadcast. It requires equipment that’s portable, ergonomic enough to let skilled operators follow fast action, and needs huge performance from cameras. In a world of 4K and HDR, it gets even tougher.

This issue has manifested in the sharing of equipment between the separate worlds of broadcast and cinema. Back when cinema was film and TV was video, the two fields had little technological connection. Notwithstanding the 1982 attempt by Panavision to create an electronic capture system in Panacam, film was still film, and TV remained TV. But the overwhelming desire to broadcast 4K pictures came some time before the easy availability of 4K broadcast cameras.

That sometimes left live acquisition reliant on shoehorning cinema cameras – such as the Sony F65 – into the rather unaccustomed world of outside broadcast. This was just as Thomson developed its Viper cinema camera from broadcast roots back in the day. Since then, cinema gear has made its way to TV with some regularity, and while the ergonomics of this solution sometimes aren’t ideal, the desire to shoot high frame rates is.

We find one example in Sony’s HDC-4800, which the company describes as Ultra High Frame Rate (UHFR). It’s not an unreasonable term, given it’s capable of 400p at 4K or 800p in HD. With effective exposures so low, at such high frame rates, it’s no surprise that adequate sensitivity requires a large Super 35 sensor – and, consequently, PL mount lenses. Although, the camera is otherwise set up as a live broadcast tool, with a layout that will be familiar to outside broadcast crews.

Such a camera is invariably paired with a Canon CN7x17, CN20x50 (if the football match is on the moon), or perhaps a member of Fujinon’s Cabrio series. Whether we consider that broadcast gear that happens to cover big chips, or film gear that works nicely for broadcast, is a matter of perspective. But they’re certainly very hireable items with a lot of uses, if you’re a rental house looking for sound investment. Both have control interfaces familiar to those in broadcast.

For a solution relying on more conventional television lenses, look at the For-A FT-One-SS4K

For a solution relying on more conventional television lenses, look at systems such as the For-A FT-One-SS4K. Using an unusual dual-sensor configuration – with one sensor detecting red and blue, and another for green – the camera shoots a highly impressive 1000fps in 4K with conventional B4-mount lenses. It has all the benefits of compactness, zoom range, operability and speed that everyone is used to. Functioning on up to 20km of fibre-optic cable, the camera’s rack-mount base station provides various outputs to feed storage devices or switchers.

For more portability, or perhaps better compatibility with smaller, faster-moving support equipment, consider the company’s FT-One-LS, with separable head and body. It’s another camera requiring a PL mount lens with Super 35 coverage, and shoots up to 500fps in 4K or 1200fps in HD. Both the For-A cameras will transfer their internal recordings, in Raw, to custom flash cartridges, making them plausible for non-broadcast work. Technology, it seems, moves in both directions.

These are not examples of gear migrating from single-camera drama to broadcast, although that’s likely to become increasingly common in the field of core camera equipment. As resolution pushes past 4K, it becomes more difficult to make sensors of adequate performance small enough to accommodate B4 lenses. Witness the 8K Sony UHC-8300, a dedicated broadcast design launched at IBC a few years ago, with its 1.25-type sensors. Where we once rigged F65s for 4K broadcast work, perhaps we’ll rig the Venice 2 for 8K.

When Motion Impossible began showing the Agito robot dolly system, it was perhaps most often built into a configuration suitable for single-camera dramas. Certainly, though, the potential for the mechanism to do similar work to a Steadicam operator at a sports event was always clear – without all the sweating and gradually slowing down towards the end of the game. The fastest base units can follow more or less any sportsperson at a track or field event, with the freestyle option capable of 30mph speeds under purely electric power.

The system has been used on a variety of broadcast sports work, including Major League Soccer in the US. It’s difficult to summarise Agito, as it’s a modular arrangement which can be built up in a huge variety of ways, including both track or free-wheeling arrangements. It’s often paired with one of Shotover’s gimbals, atop a variety of shock-absorbing platforms, risers or even a small jib. The key ability is the combination of stabilising hardware and off-road suspension system, which is enough to make the dolly usable on quite rough terrain – avoiding the need to lay enough track to cover a football field.

If there’s an incumbent in the world of camera-carrying industrial robotics, it’s Mark Roberts Motion Control. The company has been pre-eminent in electromechanical camera systems, almost since its founding in the sixties. It currently offers not only the upscale motion control cranes for which the enterprise is famous, but also a range of broadcast robotics. Remotely operable camera mounts have been important recently, in the context of keeping people safely apart. If we need to involve even fewer warm bodies, the Polymotion Player system is capable of allowing one operator to control up to 12 cameras. They keep athletes in frame under the control of a tracking solution, such as ChyronHego’s Tracab.

In a departure from purely robotic camera platforms, MRMC has exploited its Polymotion Stage system to record an unusual type of footage for various sports applications, with clients including Sky. Using a set-up that features dozens of cameras capturing the action from many angles, views from almost any position can be synthesised, and three-dimensional data derived for use in computer applications. The system rides in an expanding truck, making it possible to capture what the company is calling ‘volumetric sequences’ wherever is convenient.

With customers all over the world – from CCTV in China to NBC, CBS and HBO in the US – Blackcam is one of the world’s wider-reaching providers of broadcast-specific robotics. The provision of live, outside broadcast is familiar to the company, which had a huge 69m track set up in heavy snow to cover the World Team Challenge biathlon in the Bavarian Alps. The broadcast used the company’s B40 dolly system, with an Arri SRH-3 remote head interfaced for remote broadcast operation. The same configuration made an appearance at the Dortmund versus Bayern Munich game in last season’s Bundesliga, matching player motion up to a sprightly five metres per second.

The increasing demand for both high speed and frame rate prompted Blackcam to develop the RH2W remote head. It was used for the 2020 DFB-Pokal final played between Bayern Munich and Bayer Leverkusen in the Berlin Olympic Stadium. The system handles upscale cameras, including the Sony HDC-4800 discussed earlier – a reasonably bulky option – with the sort of large box lenses lesser systems might struggle to accommodate. The company’s product range includes dollies, lifting towers, remote heads – and enough robotic camera support devices to allow the most automated studio in the world to equip itself almost entirely from Blackcam’s warehouse.

It’s regular for stabilised platforms to find use in both single-camera and live broadcast work. Gyro-Stabilized Systems, which acquired Cineflex in 2017, seems particularly aware of the broadcast market and its often lighter-weight payloads. As such, the company’s credits don’t just include a huge list of prominent feature films, from Black Widow to Jason Bourne, but also sports broadcasters such as NFL Network, Nascar on Fox and CBS college sports coverage. Nature documentaries sit somewhere between the two in terms of technique, with the BBC’s Great Barrier Reef and Blue Planet II also part of the portfolio.

The least bulky Cineflex gimbal – the 512 – weighs in at 16.3kg, excluding payload. The technological lineage between it and the Cinema Mini 512 is clear, and there is naturally some crossover in ability. Either way, for aerial work, a lower-weight, less-obtrusive aircraft and longer flight capability make for the best results. Productions are now keen to attach stabilising mounts to things other than helicopters – like boats, cars and occasionally a surprised wildebeest. So, gimbals big enough to take professional cameras, sturdy enough to mount on helicopters, but still compact enough to be convenient have never been more relevant.

With a history mainly in remote head manufacturing aimed at high-end single-camera work, Mo-Sys also offers the StarTracker system. It’s designed for virtual studios, and a selection of broadcast robotics for crane, jib and dolly work. This equipment finds use both in live virtual production and on-set pre-visualisation for VFX-heavy dramas. It works on an unusual principle, involving an upward-looking witness camera and a pseudorandom scattering of retroreflective ceiling dots – hence the name.

StarTracker includes a plug-in for the hugely popular Unreal Engine, a combination used on Strictly Come Dancing for creating augmented-reality additions to a studio emptied of its audience by Covid-19 requirements. And, in something of a return to retro logo design, Mo-Sys provided a motion control system to ITV for its physical reincarnation of the channel’s on-screen identity. This was part of the ITV Creates project, inviting artists to work with a real-world chrome embodiment of the logo, as an equally real camera flies by.

That seems appropriate given the current popularity for all things retro. At the same time, the push for ever more capability from broadcast cameras is likely to provoke greater crossovers. In the end, the underlying technology has never been more similar, and it’s only the facilities surrounding it that differentiate modern cameras. If there’s one thing we’ve rather overlooked, it’s HDR, which (finally!) does something to address the previously feeble colour and brightness range of home television that somehow persisted for decades. But, the push for more is likely to complicate the lives of broadcast vision engineers for quite a while yet.

This feature originally appeared in the February 2022 issue of Definition magazine. 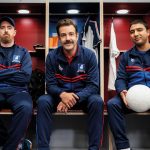