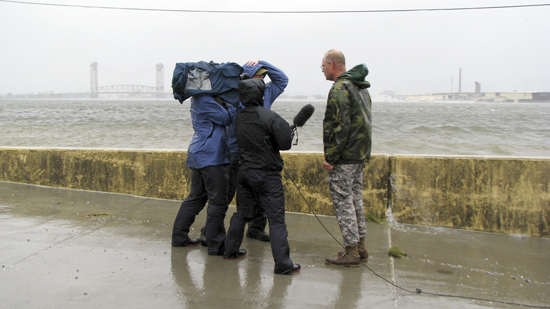 Bad Skills In The Face Of Mother Nature

Shooting in Hurricane Gustav © Medical Student Flickr.comOne of the pleasant by-products of the HD evolution are the benefits brought to standard definition broadcasts. Well lit and shot standard definition material looks far better on a large HD screen than a small screen. Similarly HD productions broadcast in SD also look better than if they had originated with SD cameras and lenses.

The Olympics was a stunning example of how good lighting, direction and camera work come together to delivery powerful experience in SD and a compelling breathtaking experience in HD.

But large screens highlight the production value, or lack of, in all genres of programming. Tuning into the network coverage of Hurricane Gustav I was interested to see what broadcasters had learnt from their experience of covering Katrina. Most prominent of all was a large flat screen in studios that commentators would stand beside and using a touch screen to highlight rivers and canals.

CNN went for a large screen with an Apple-like interface to select and then drag the viewer videos around the screen enlarging or reducing them. Rather gimmicky but a valiant effort to make the broadcasts more image led. What of the field broadcasts?

Fox TV show host Geraldo Rivera was seen scampering around the base of the levees and they occasionally went live, not an easy task in driving ran and high winds. It was wet, very wet. But not as wet as the operating skills of the camera operator.

A case of being out of his depth in more ways than one.

Little did Geraldo know that the viewers were being entertained with a perfectly focused image of water drops on the lens! The cameraman had the focus set to auto.

For once the pictures were left to speak for themselves, in fact Geraldo uttered the immortal words “A picture is worth a thousand words so I’ll let the picture do the talking”. Indeed the pictures did do the talking and they spoke volumes for the mentality of the executive producer.

A craft camera operator would have suggested a device that repels water from the lens and would have had enough presence of mind to monitor the image quality and at least had the subject in focus.

In the large screen environment ‘Letting the pictures do the talking’ does not come without an increased cost penalty of using craft oriented and experienced crew. It is clear to me that the cost is balanced by engaging imagery.

There was another instance where he breathlessly reported that a ‘victim’ was being rescued by being hauled in by emergency response team, from the middle of flooded industrial site. He urged the cameraman to get the shot, but unable to zoom to a tight shot due to being hand held with inadequate camera the viewer was none the wiser that it was not a rescue at all but emergency crew securing floating debris.

Perhaps the growing penetration of large high definition TV sets will stop journalist’s tendency to dramatise what they hope is happening rather than reporting what they and the camera are seeing.
I’m hoping that having seen craft standards slip in news and current affairs in the last decade that large HD screens will at least embarrass producers and editors into taking greater care. Ultimately well crafted high definition images of the real thing will be more compelling than increasingly inaccurate presenters and reporters dramatisation of events.

Sales of sets above 36 inch in size have increased by over 700 percent. TV manufacturer Sharp predict that the average size of home TV sets will be 60 inches by 2015.

The small ‘box in the corner’ is no longer a window on the world but with increasing use of viewer supplied pictures has also become a mirror on the wall, and a massive mirror at that. 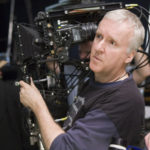 The Cameras Of Avatar