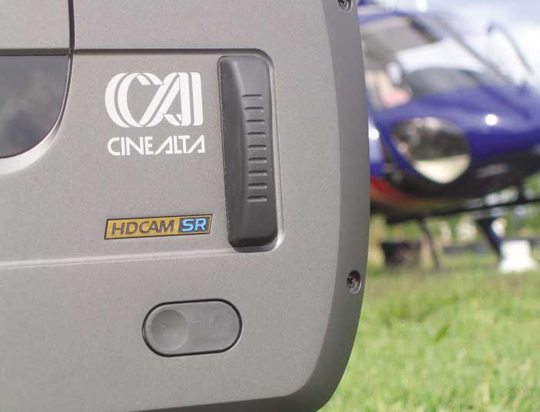 The SRW-1 combo – pre-flightWe had been set to record HDCAM aerials over Italy using the stabilised Cineflex HD camera and judging by previous shoots results would be stunning. The problem with HDCAM is that it isn’t the ideal format for the back of an aircraft if you want to record 24p or 25p, as one needs a heavy studio recorder that runs on mains. So when Getty Images expressed a preference for 4:2:2 and the new SRW-1 became available – Mamma Mia! A smaller, lighter, less power hungry, higher quality alternative to HDCAM…. don’t we love Moore’s law! The HDCAM deck would remain a back-up as ballast in the boot of the production van rather than sacrificing its weight for fuel in the helicopter.

Switch on The SR field recorder is comprised of two parts. The SRW-I recorder and the SPC processor. The combo is being called the SRW-1 field recorder by most. We can assume that the SRW does most of the work; it contains the tape drive and is considerably heavier and more power hungry than the SPC processor. The form factor is novel and bizarre, in looks at least. The SRW clamps onto the top of the SPC. However despite looking like a double storey ghetto blaster its functionality reverts to the familiar Sony field recorders of a top tape loading slot with inputs and outputs down one side and a big handle across the top. However there is one difference in previous field recorders which is the lack of in-built controls, other than eject, on the unit.

A cool looking remote control is provided which can be extended from the recorder by cable. It displays timecode, audio levels for 12 channels, warnings, channel condition time frame rate, conventional VTR buttons a mini- jog pushbutton and curious large wheel which didn’t seem to do much on the pre-production model we were using. The remote can be secured to the top of the SRW-1 with a hot shoe. I’d prefer a set of emergency use buttons somewhere as the remote control or its cable could be damaged in the field. Without the remote it’s the end of the shoot!

If the first impression is the bizarre looks the second impression is it’s sound. The cooling fans were on continuously and made considerable noise. Interior sound recording within a distance of six feet of the unit would be troublesome. For dramas I imagine well ventilated soundproof box may be needed or a longer extension cable for the remote so the unit can be operated off-set but monitored on the remote on set. However as the unit itself did not get too warm there may be room for reducing the airflow. The power management is often handled in software so I would hope that the fans would become a little quieter in production models. Part of the reason for the noise is that the combined power drain is 95 watts so there is a lot of heat to dissipate by fans, The SRW-1draws 60 watts and the processor 35 watts.

Careful attention must be made that the power supply and cable is capable of providing at least eight amps. The most recently built field equipment is designed for 50 to70 watt maximum and so will be struggling with 95 watts. A trusty old AC500 can cope with 120 watts as can some selected new power supplies.

I also enlisted the help of the Black Box Video battery box, ‘The Big One’, capable of running the recorder for almost two hours if we blew a fuse in the aircraft and useful for checking back recordings on the ground without derigging the aircraft. About the only trap I found, and was warned about in advance, occurs when changing frame rates, as one must adopt the f500 routine of ejecting the tape and rebooting. In fact the tape must be ejected before the new frame rate is selected in the menu, otherwise even if you reboot the framerate will not change. 12 channels of audio are available in the SR format, however the SRW has only four Canon 3-pin inputs. There is AES/EBU digital input and output to access the other channels. Video inputs are split into A and B channels. When recording 4:4:4 two channels of video are required from the camera (dual stream). When recording 4:2:2 the A channel is the default input.

Monitoring outputs are clean HD-SDI for A and B channels and a second monitoring HD-SDI output with switchable character generator overlay. When inputting 4:4:4 the HD-SDI output provides a useful means of monitoring as the processor converts RGB to Y PB PR. A SDI output is available and can be configured for squeeze, crop or letterbox. The SDI output cannot be switched to composite. It creates 2:3 pull down when shooting at 23.98p Timecode in and out are positioned on the SRW-1. HD reference is on the SPC. There is one power switch for each unit, with the SPC having the master power switch.

The new menu isn’t too bad, but allow 30 minutes for familiarisation to reduce the likelihood of panic attacks.

Selecting format and frame rates is straightforward and both options are on the same page in the menu. There is a line of buttons on the remote that jump the menu to time code, video, audio, system and home. This is very helpful but time code is adjusted by jog wheel and is somewhat buried in the menu and with Italian flight time costing €26 a minute the wasted seconds add up.

Recording is within 1/2 second from pause mode. Colour bars and black can be generated, a very useful feature, a wider choice of colour bars would be welcome.

The machine accepts small cassettes only. A 40 minute will run 48 minutes at 25p; 50 minutes at 24p when recording 4:2:2. When recording 4:4:4 or stereo recording times are reduced. Sony say that they have improved tape technology this is born out by the tape length being longer, however as the tape travels faster there is no significant change in running time over HDCAM tapes.

The cassette shell is a beige white reminiscent of the colour of the first floppy disks and has improved finger grips to help open the case.

A ‘modified’ SRW sits a top the Genesis camera. The question is whether the Genesis has an internal MPEG processor or if all the signal processing is housed in the SRW. The likelihood is that most of the processing takes place in the SRW-1. You may question then the size of the SPC.

There is a future upgrade that will install a fibre optic connector on the unit so the form factor is about right for remote recording of a location drama and any studio programmes. A camera remote control can be connected to the unit and presumably this signal will be carried over the optical fibre interface to the camera, turning the SRW into a HD hub.

The temptation to mount the SRW-1 on a Viper will continue, but a combination of power drain, weight and noise of the SRW-1 makes it a questionable combination in the foreseeable future. We paid particular attention to EMI radiation. Computers control many modern helicopters. A couple of mysterious engine shutdowns have been blamed on high tech ‘carry on’ equipment so it is prudent to check all aircraft systems with a new recorder.

We didn’t expect any problems and there were none.

The SRW-1 does have sound issues from the cooling fansThe other issue is susceptibility of the recorder itself to RF radiation from aircraft systems. Flying fashionably low near transmitter masts we had a twenty second RF hit on tape. This kind of RF interference close to powerful sources is not unusual. The effect was quite obvious on the monitor and on replay the interference on tape occurred at the same time and for the same duration as it presented itself on the monitor at the time. This experience suggests that the recorder itself is well shielded and the RF was being picked up from the camera head or the two lengths of six foot cable between gimbal and recorder.

What one fears most with a new recorder is exterior RF interference that goes to tape that is not evident whilst shooting on a monitor.

The unit can also record two separate HD-SDI 4:2:2 streams from two sources. Rumoured to be prompted by a request by James Cameron who wants to shoot more 3D using HD, this feature will be available to all.

So a two camera drama couldn’t be easier to synch up. However the SRW must be used to digitise the rushes as the SR5000 studio deck does not support the dual picture mode.

The most versatile feature of the SRW1 is its ability to switch compression ratios.

It achieves the 880Mbs rate by running the tape at double speed, thus halving the maximum recording time to 25minutes. A future upgrade will also enable the SRW to record 720 60p.

As usual with new HD kit there is a need to create your own terminology, we need a description of stereo recording in compressed 4:2:2 that is not confused with dual stream 4:4:4.

Up to three SRW-1s can be daisy-chained together so duplicate recording or continuous recording without stopping is possible from the one SPC.

We chose 4:2:2 due to the increased recording time in comparison to HQ 4:4:4, this meant less tape changes in flight, lower dubbing charges and lower stock costs. Since most aerial footage is not heavily graded it may well be that 4:2:2 will be a sensible choice for long form aerial projects. Also TV oriented 4:4:4 post houses are thin on the ground at the moment.

Although you would be hard pressed to tell the difference on standard definition TV on a large screen the extra detail of 4:2:2 makes the incredible detail in an aerial shot really shine. 10-bit rather than 8-bit will ensure minimal degradation in post.

We flew for 18 hours over five days pretty much rolling on take off and not shutting down until we landed. The shipping weight of 18 tapes and the SRW-1 was less than a typical hard disk recorder with just 50 minutes of 4:2:2 recording. The trade off is that the SR is more expensive to dub or digitise. A hard disk simply plugs into the edit, but taking enough drives abroad for 18 hours of 4:2:2 is still a daunting proposition.

In the past Sony have rolled out low cost players for new tape formats at their discretion, however now that hard drives are a viable working alternative to tape there will be some instances where the cost of digitising will swing productions away from tape so the SR format may need a low cost player to be introduced more quickly than previous formats.

Our solution to the relatively high cost of dubbing any HD format was to simultaneously record on a DS70AP DV  recorder. This is the only Sony 12 volt powered DV deck with SDI and timecode input.

However if there was a 12 volt XDCAM it would also be suitable, as would a DV drive, but the production company had a DV capability in their own edit suite so we decided on DV. This was fed from the SDI output and timecode fed by cable.

Promise of 1920 x1080 60p recording for slo-mo will make this a versatile machine but possibly the last in a long line of Sony field portable tape machines?

So George Lucas ‘gave’ us progressive scan f900 and James Cameron a two for-the-price-of-one stereo HD field recorder. Now if only Spielberg was as big a fan of HD… 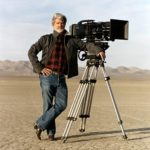