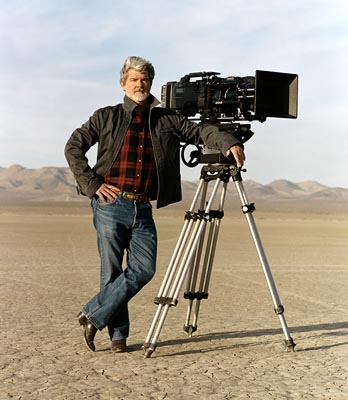 George Lucas and his first digital camera for Star WarsIn late 1995 Rick McCallum (producer for George Lucas) purchased a widescreen Digital Betacam from us (Sony) – to support the shooting of “behind the scenes” material during their movie and television productions. George himself was highly impressed at how far digital imaging had come and he conducted some tests with the DB – taking this out to 35mm film. We screened this at his special screening room at Skywalker ranch. George said it had everything in terms of image quality for credible moviemaking – except resolution.

I arranged a special dinner meeting in the Fall of 1996 (during an LA SMPTE Fall Conference) – between a management team from Sony Japan, and a large team from Lucasfilm (led by Rick McCallum). Rick made a strong case for Sony to work with them on a 24-frame system. A very key point that was made by Lucasfilm was that they would work with the technology of the moment – and not demand anything beyond what Sony was capable of developing and manufacturing at that time. This specifically bore on the issue of the filtering and compression already determined for the future HDCAM. This did raise technical questions at the time – but George Lucas repeatedly said he would avoid technical specification debates, and would instead make all judgements and decisions based upon careful test shoots, transfers to films and subjective assessments on the big screen. However, he said it MUST be a 24-frame system. This was a major issue for Sony! 24-frame systems had been discussed for a number of years – but there was serious apprehensions about the potential market size. However, the emergence of a major move industry figure like George Lucas did galvanize a heightened attention.

At the end of that dinner (and a LOT of intense discussion) the then leader of the Sony team, Takeo Eguchi , pledged to develop such a 24P system. This would be a variant on the HDCAM system planned to be delivered to the marketplace the following year. George Lucas subsequently requested that we partner with Panavision as he wanted to use their lenses.

In early 1997 we showed George and Rick the new HDCAM camcorder and again we did filmout tests. These test were more elaborate as George searched for the best way to shoot 2.35:1 with a 16:9 HD camcorder (Panavision anamorphic lenses and digital cropping experiments – all taken to film). George told us that the picture quality would meet indeed his needs and he was anxious to move forward. A working group made up of Sony Japan, Sony USA, Panavision, and Lucasfilm, was formed and meetings were held at Skywalker every three months. System details relating to on-set needs and then the all-important postproduction needs were hammered out. Tests on various parts of the system continued along the way.

I can’t say enough about that large team. There were stellar engineers involved on all sides, and they superbly dealt with a host of technical and system issues.

The lens development and 24P system development spanned 1997-2000. It became protracted because an entirely separate (but vitally important agenda) had meantime arisen. In early 1998 Laser Pacific in Los Angeles proposed to Sony a comprehensive 24P mastering system to manage the postproduction of multiple international HDTV formats and downconverted SDTV formats. This was to considerably add to the complexity of the overall postproduction system (and had immense implications for the design of the HDW-F500 studio VTR). However, the two separate agendas did technically converge to the benefit of both parties – and indeed, the industry in general.

On March 10th 2000 a famous filmout screening was held at Skywalker Ranch (the final tests on the prototype HDW-F900) and George Lucas asked for comments from all present. At the end of a discussion he said, “Lets do it” – and the commitment had been made to shoot Star wars Episode 2 entirely in 24P. Six prototype systems were made PT2 started one month later. The rest is history.

Equally dramatic was the presentation made by Sony in that same time frame to a specially convened meeting of the SMPTE on 24-frame standardisation in Dec 1998 – where I described the proposed 24P system – and the use of segmented frames to manage the system interfacing of 24-frame progressively originated material. That caused a firestorm that took another six months to quell ! We conducted many one on one meetings in Hollywood and also public technical presentations to painstakingly explain all about the merits of 24 PsF. Finally credibility grew. In 1999 24PsF was included in the ITU 709 recommendation and it became an international standard in 2000 just in time to dovetail with the emerging Sony system. 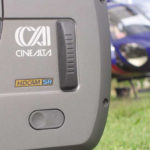 The Birth Of High Definition

Gunda employs careful filmmaking techniques to offer an intimate look at the lives of...

This megamusical has now transferred its feline fantasy to the silver screen, but Cats...
Read Here