Panasonic’s celebrated new 3D camcorderTwo big professional video companies have recently opened ‘Centres of excellence’ in Pinewood Studios, UK. AVID and Panasonic have both made major investments in space and equipment installations to present their equipment in near-studio conditions.

For Panasonic the allure of marketing file based working was strong enough for them to produce a full workflow from setting metadata at the camera end to archiving ‘post broadcast’. The chain includes everything in between with full editing suites donated from AVID, Adobe and Apple.

Also for a short time, due to it’s current celebrity, the new Panasonic 3D camera AG-3DA1 was available for viewing in between appointments with broadcasters and production companies throughout Europe.

The new 3D camera has been designed for television with it’s limited interocular arrangement. Interestingly though matched lenses from Leica will be able to produced lens data for use with third party equipment. A first for Panasonic. 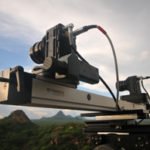 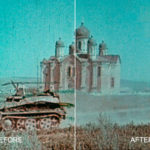 Not all lenses are made equal, but that’s what we love about them! Here,...

16 of continuous recording?! Samsung have addressed demands of surveillance equipment with release of...
Read Here