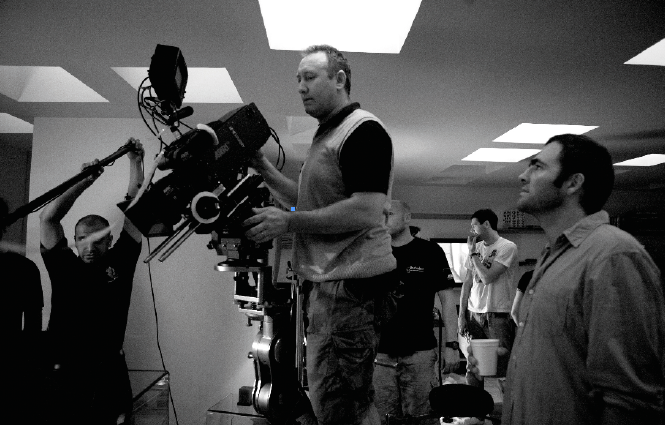 DoP Mark Hamilton had his first experience with Arri’s increasingly popular D21 digital cinematography camera systemHit Girls is a light hearted action ‘short’ about two female flatmates, who are coincidentally assassins. After one girl kills the others ‘date’ (retaliation to a previous argument) they are both united in burying him in the depths of a forest in the middle of the night…

However, their continued bickering breaks into a dynamic combat.

This ‘fight’ between the girls is the showcase of the film so two nights, of the three, were dedicated to filming this in some deep, dense woods in Oxfordshire last August.

At our first pre-production meeting, the film route wasn’t completely ruled out – but it was up to Adrian Vitoria (Director) and I to overwhelmingly convince Rosie Fellner (Producer) that it was integral to do so. Rosie had already set up a few meetings going the HD route and, with a couple of HD features on the cards, it was actually a sensible time for both Adrian and I to delve into the wider market.

We’d recently shot a feature called, The Crew on the F900R which was for DVD release through Momentum. We’d been very pleased with it for that project, but this was now an opportunity to look into some of the more ‘filmic’ cameras on offer. A couple on our short list were, Red One, Arri D-20 and the Viper.

At the time we’d heard stories of damaged data and frozen peas being used to cool down the Red, which were slightly off putting, but it was still a camera Adrian and I wanted to explore. At this point, however, Rosie secured an Arri and Molinare collaboration where we were offered a D21 for three days combined with Molinare handling all aspects of the post.

The approach was to treat the short film almost as though it was a pre-title sequence for a feature, so the D21’s reputation for reproducing cinematic and high production value images was a really exciting prospect to work with. The ‘duel’ between the two girls was a key theme and I was keen to give them their own frame space, far right and left, so in the wide shots there’d be an apparent and significant ‘distance’ between them.

To help this, we agreed to shoot FHA (Full Height Anamorphic), which was an option Arri were developing at the time on their D21, and use, ‘High Speed’ anamorphic lenses.

An agreement for three days with the Arri D21 and using Molinare for all post was procured by the producer otherwise RED was to be usedUnfortunately, a combination of factors and timing issues meant we couldn’t experiment in this way. Nevertheless Adrian was still eager to pursue with the wider scope, as per our earlier storyboarding, so we decided to compromise some ‘lines’ for the desired aspect ratio – letterboxing at 1:2.40

I always intended to light across the centre plane, and draw the viewer into these action areas (using vignettes and oval spots too) – so cropping the top and bottom wasn’t a huge sacrifice in that respect as the tree tops and ground would’ve been close to black anyway.

Adrian likes to shoot spontaneously, so depending on how dialogue or action goes in rehearsal – absolutely anything can change. I really like his methods and the boldness of not being dictated by the script for the sake of it, but it really keeps you on your toes as a DP and you have to have a number of lighting set-ups in your head in case you’re suddenly shooting towards what was once your ‘safe’ zone.

For that reason, and with the short time we had, I decided to light this scene with a view of us looking the full 360º. We’d shot a scene in a boxing ring for a previous film, so I knew the sort of coverage he was going to need, particularly with me involved for some ‘hand held’ POV – and I knew that was going to be intensified with the girls ‘duel’.

These sorts of night locations are interesting because you’re essentially lighting from scratch and can just pick out the detail you want and leave the areas you don’t like to disappear into darkness. And, whilst I like night to look as convincingly like night as possible, and therefore we all know that the forest in the middle of the night should really be pitch black, it’s a worthwhile challenge to engineer acceptable sources of the light.

Predominantly there were the mildly warm beams of their parked car headlights (two slightly frosted red heads) and the moderately cool blue glow from our ‘moon’. This also acted nicely, on occasions, as a rim or backlight. Ideally the 6k would’ve been a 10k and fixed much higher within the trees and shone through a second trace frame or silk for a bit more softness – but again this wasn’t feasible with our resources. Other than that we carefully manoeuvred a selection of lights at various distances from the playing scene to gently pick out other tree lines – just to help produce some depth to the image, which I like to force. Finally, Art Director Andrew Rothschild kindly dressed a couple of practical lanterns on the ground to justify the subtle fill that I needed to get enough detail on the girls faces, which actually came from a dimmed jem ball swung out on a long arm.

Although the D21 seemed to produce naturally soft images, I also had a ¼ BPM (Black Promist) throughout and some smoke gently wafting in from the direction of the car too, which we justified as exhaust fumes. For me both these factors helped this particular scenario.

Being in a controlled situation we could safely run cables to a deck and our settings were; HDCAM SR, Dual Link – 4:4:4. We shot at 24p as delivery was primarily festivals and there was even talk of a possible print. The shutter was fixed at 180º, although we’d prepared to change this to enhance some of the martial arts sequences. However, the girls and their stunt doubles (choreographed by Bourne Ultimatum’s Joey Ansah) did such a good job it didn’t need any camera trickery.

DP Mark Hamilton handles the D21 while Director Adrian Vitoria looks onWe’d also prepared to disable the shutter, which the D21 does, in case we had less light than intended – particularly when it came to close up detail of scratching and nails being ripped off. However, without the anamorphic lenses (we used Zeiss master primes) I was more comfortable shooting wide open (at 180º) which actually gave the desired shallow depth of field that we appreciate from 35mm.

Adrian likes to know what he’s seeing is accurate to what he’s going to get to play with in the edit, so I’ll always try to do as much as possible in camera as I can (optical filters and lighting gels etc.) to give him a clear idea of what he’ll see later and with the D21 what we saw on the monitors was very representative of what we later had in the grade.

This was my first outing with the D21 and to begin on a night shoot, over a bank holiday weekend, in the middle of a woods carried enough potential complications for me to encounter as it was. Fortunately Tim Bertani (Focus) and Tobin Jones (Loader) were available and well prepared, given their half a day with me at Arri.

Shooting itself went well – the D21 was a really easy unit to get to grips with. All the necessary buttons were in all the right places (not one of those cameras with so many switches that you can accidentally change settings by picking it up) and overall it just felt durable and ready for action.

Had we gone the 35mm route I would’ve shot with 500 ASA but, as it was, I rated the D21’s sensitivity at 320 ASA for 3200k. We fixed a small monitor on top of the camera, occasionally flicking from image to waveform for a little peace of mind. I was thankful we had as we ended up working at such a pace that I had no time to carefully study the pictures on the larger screen set up some distance away.

With the image being prominently dark by the very nature of what and when we were filming, one of the aspects I was most concerned with was inducing too much ‘noise’. I’ve worked on a number of video, HD and HDV formats in the past, so exposing and latitude (lack of) is something I’ve always been very aware of and disciplined in my lighting. Even so it was a relief to see how well it held up and certainly better than reports I’d read about the D20’s limited shadow detail.

(I recently shot an ad with the VariCam (in film record mode) and I thought that dealt with over/under exposure very well for that type of camera).

The main factor was actually ‘focus’ – particularly as we were shooting wide open for much of the time. It made things very tricky for Tim B, not just because of the way we were shooting, but because of the camera’s naturally shallow depth of field. It meant we all had to be spot on with ‘marks’ and ‘blocking’ – which, apparently, isn’t easy when doing a double back flip.!

The picture grade with Tim Waller also went incredibly smoothly – his reputation came before him, so it was no surprise when Adrian and I arrived that he’d prepared an impressive array of styles and techniques that he’d either previously used or had been working on, all of which would have complemented the film in their own way. After applying a couple of options as a guide, we actually agreed that all it needed (across the board) was just a slight amount of ‘contrast’ added and a hint of the ‘bleach by-pass process’ look (which enhanced the highlights in the ‘woods’) and, within that, there were subtle nuances for each of the other two locations.

I can’t pretend that a morning at Arri and a few nights on location has given me a comprehensive insight and knowledge into the full workings of the D21, but, all in all, I was impressed with the instant results it gave and has certainly set a high bench mark for any other cameras we try in the future.

From an operating point I found the unit comfortable and well balanced and it was pleasing not to keep calibrating lenses as we had on our F900R job. The only thing I’d have to concede is that, even as a six feet three inches, 17 and a half stone ex-rugby player, I still found the hand held stuff tiring, even in short bursts, but that’s a small price I’d pay any day to work with it again (but next time in the DATA mode). 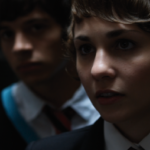 How Red's UK Beginnings Were 'Tormented'