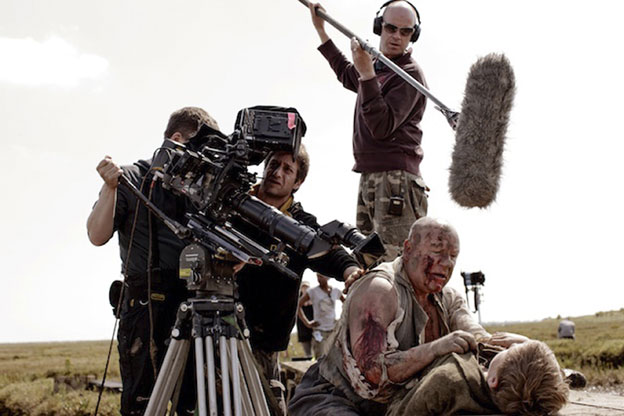 In last month’s issue we talked to Gavin Struthers about his handling of Downton Abbey Series 2 and how shooting for television is now as ‘epic’ as it has ever been. This month we ask DP Florian Hoffmeister (who shot the impressive Great Expectations for the BBC last year) the difference in his shooting for the cinema and for television

As some readers might have noticed the BBC’s adaptation of Dickens’ Great Expectations has stayed with us at HD Magazine long after the show has been aired, although it is at the moment being shown on PBS’ Masterpiece channel in the US. We talked last month with Jet Omoshebi who graded the three episodes of the the drama and she was quick to point out that the story we were looking for wasn’t really a grading one but that the look was achieved more in-camera with guidance from Jet was to how the look was evolving.

The DP for the shoot was Florian Hoffmeister who we tracked down just as he was planning for his latest shoot, another adaptation of a classic, this time Zola’s Thérese Raquin and this time maybe on film.

We asked him how he prepared for the Dickens adaptation. “I will always try to find a look for a project in-camera rather than in post. I’m an absolute advocate of in-camera filtration, in-camera looks, that’s basically how I see my profession. In the past when capturing on film in-camera filtration was a very useful tool when entering in to a creative discussion with a colourist. It just extended the field of possibilities and I find you can actually apply the same to Digital although people might say different and I’m sure there might be some scientific reason why you shouldn’t do it, creatively I’m found it very liberating.

“When I started to shoot digital about three years ago I think cameras were finally at a stage that you could actually treat them as cameras, as digital recording devices where you could pick them up and work with them as I had done before with film.

“The creative challenge on Great Expectations was that we were supposed to shoot in summer. For the dramatic sake of the programme it’s absolutely crucial that the marshes look as miserable as possible because why would the character Pip leave otherwise. If you shoot him in a cornfield in the midst of summer he might never want to leave.

Florian on the set of the BBC’s Great Expectations“So you have to make the marshlands a horrible place and you have two options. One is to just capture it and do everything digitally in post or to consider in-camera filtration. I think if you do it only in post is that you end up with a manufactured look. I’ve seen films where people have decided to say de-colourise the grass for example, it’s either very costly because you have to paint it out or if you start to do it in a grading suite you could end up with a look that’s not natural.

“So we did a test and got out a very strong combination of NDs, day for night and coloured filters, the whole filter sandwich ended up as thick as my thumb! This lead to an almost monochromatic colour scale where the skin tones hold up quite nicely. So we actually de-saturated the image without effecting mid-tones. We effected the greens a lot and they all went away and that’s the look we went with. In prep I did that stuff and took it to Jet to play around with and we wondered if we could achieve the same thing without the filters, so there was a lot of conversation going on at that time.

“In the initial marsh scenes there was quite a lot of digital manipulation creating a fog ridden infinite horizon, getting rid of landscapes and inserting slaves ships. The CGI was added by a company called Blue Bolt who had worked on Games Of Thrones previously with the same director, Brian Kirk.

“So with the opening sequence we did a little pre-grade and then the pre-graded images went to them. We had some fog textures for real but they added most of the fog elements as a composite.”

All these elements makes this television programme very cinematic and harks back to the classic version directed by David Lean, which of course was a reference for Florian and his director.

“This was the first time that I had worked with Brian and in a sense it was a beautiful collaboration because we just clicked right away so it wasn’t much of a conscious process, it just happened.

“Whatever I do I always tried to do it cinematically in a way. It’s like the way I see the world.

On set with the marshes, Florian is operating using a Frazier lens which he uses for close ups and spectacular wide shots.

As we found out last month Jet has added effects to Miss Havisham to emphasize her ghostly qualities. Florian was also intent on using the look to keep the narrative moving. “It’s all about the boy and how he sees the world and when he enters Satis House (Miss Havisham’s house) we wanted to make sure that you see Miss Havisham and Estella all through his eyes. So Miss Havisham had this kind of ethereal glow around her which she then loses through the three part drama. So she was lit different but then when we got in to the grade Jet took it even a step further which is very obvious in the moment that she comes down the stairs as if there is a harder light source behind her.

“That’s actually a beautiful side of the collaboration that we started out on set with something, we lit her very coldly  and then when we go in to the grade working with somebody like Jet who understands the principal and then takes that a step further.”

“I think the difficulty in working within an HD environment is of course you have this magnificent latitude but nobody needs that latitude, if you switch on your TV you won’t have 14 stops on it because otherwise it would look horrible, so you have to shape the image, you have to lose resolution, you want to create a strong, dramatic image. So you have to make decisions and luckily in the grade Jet was pushing in the same direction as we did and something interesting came out.

“We shaped the resolution down as well in camera by using old lenses, old Cooke S2s in fact any kind of glass that is not as manufactured a today’s lenses are and then the filtration on top of that.

“You could tell on the waveform that the moment we put that on it was going to be a straight line at times. I was happy to lose detail which was the biggest challenge. In a way you light it very softly and thin, I didn’t want to have a strong sunlight and then get hard contrasts. The light is thin and soft so when you light softly its really hard to get that drop off in to black so we had to really push the camera in terms of exposure. If you do it just through contrast you suddenly end up with these burnt out windows with very strong blacks which doesn’t give you that cinematic richness.

“The underexposing is the good thing about the camera, that you can underexpose without running in to grain. I work very precisely with my light meter and I don’t work off a monitor. I just have a little Astro monitor that let’s me judge the picture subjectively – I only work with my light meter to expose.

“Having worked in film and digital I tend to underexpose because I think skin tones looks much better if they are -1 or -2 stops down. Alexa lets you enter that exposure space with confidence.

“At one point the filtration was so heavy that we ran into IR problems, one day I was watching the rushes and a hand came in to shot with a light meter, the hand was wearing a very strange purple pink shirt. I was thinking ‘who is holding that light meter?’. Because I always have this grey jumper when I work on set. So we really pushed the camera to its limits, if you’re brave with it you can get really beautiful results.”

Florian is just in preparation for this US indie film of Therese Raquin and he is deciding whether to use film or digital. How would he shoot that differently from Great Expectations?

“The people who have influenced me like Robbie Richardson and Roger Deakins don’t change the way they shoot for different disciplines, they expose by eye and use a light meter. I think that is something I want to maintain. Having the tent and the big monitor is good in a certain way if you have the time but because I operate myself it seems to take me away from things. I think the key for feature film production is quality control. You can set your meters and you can set your look and as a cinematographer you should be confident that you know what you’re doing, you don’t necessarily have to watch it back. Fifty years ago you wouldn’t have the rushes back for days in some cases. But because the pace in production is now so much faster I think it is a trap to easily to fall in to, to say ‘lets do ProRes SxS cards’ and have a DIT on a back of a truck transfering rushes because after day two he is going to plug-in his iPod and listen to something, he’s not going to watch.

“So for this new film I am in touch with ColorFront in Hungary who have developed this on set digital lab which is basically a trolley with a couple of people who will do all formats conversions, all distribution of rushes and they will watch every single take to watch for focus, digital issues, IR or whatever. I think if you go on the big screen you need this quality control and that’s why I would always push for ArriRAW unless you shoot something like a ‘from the hip’ documentary. It is very expensive though and I do still think capturing on film and post producing digitally is still an option. 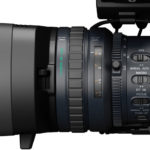 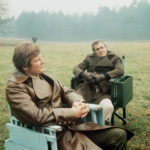