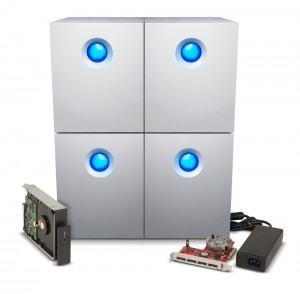 A Practical Guide To Desktop Storage by Dave Brewis

The often neglected hard disc is a bedrock for what we do. Storage is the proverbial bank. It’s where we keep safe our most precious assets; video and media files. The type of disc storage we choose defines how secure those assets are, and governs the speed at which we can access them.

Of course, as video pros, not all of our disc storage needs are the same, all of the time. We’re working with different video formats and different codecs, we’re working in our studios and on the road, and on shows with shelf lives ranging from one day to several years.

Each of us therefore needs to select video storage which is right for our needs. More specifically, storage which: a) Offers the optimum level of performance, b) Provides the appropriate level of security, and c) Is practical in design.

So let’s look at each of those in turn, and see if we can take a practical look at desktop video storage, referring, as I will, to the LaCie range of desktop drives, those with which I’m most familiar.

Disc performance is measured in MB/s and there are essentially three contributing factors: 1) The speed of the discs measured in RPM (Revolutions Per Minute). 2) The interface and connection between your discs and your computer, and 3) How you set up your disc array.

Firstly disc speed then. The vast majority of external desktop hard discs suitable for video work spin at 7200rpm, so frankly this is the first thing to look out for. Easy isn’t it?

Secondly connectivity, as there are now a range of ways to connect your external hard disc to your computer. Let’s take for example the LaCie d2 Quadra or the larger capacity LaCie 2big Quadra, both of which I’d consider ‘minimum requirement’ hard discs for the video professional. In terms of connectivity both the d2 and 2big Quadra offer USB 2.0, FireWire 400, FireWire 800 and eSATA 3Gb/s, in ascending order of connection speed. Embracing the future, LaCie has also recently announced a USB 3.0 version of the 2big Quadra, which will further positively impact connection speed, subject to others, such as Apple for example, deciding to support USB 3.0.

At this stage we could get hung up on geeky performance comparisons, but hey this is a practical guide, so know this: FireWire 800 supports data rates of over twice that of FireWire 400 and USB 2.0, and if you’re editing in (for example) HDV, XDCAM-EX, and even DVCProHD video, Firewire 800 connectivity on discs of this type will in nearly all cases give you the performance you need.

It’s true however that eSATA 3Gb/s supports even faster data transfer rates, and hence provides much better disc performance. This performance is further enhanced by using multiple discs to create a disc ‘array’, which critically brings us to the third factor affecting performance.

In a disc array, data is ‘written to’ and ‘read from’ multiple discs simultaneously, dramatically increasing the speed at which your computer accesses and renders video files.

Setting up an array using ‘Disc Utility’ on a Mac is surprisingly simple, and where we can format our array using RAID (Redundant Array of Independent/Inexpensive Discs).

In order to achieve the highest disc performance levels, you would normally configure an array as RAID 0. However, performance isn’t our only consideration as video editors. We must also ensure our work is safe, and in the event of disc failure, that our work is protected.

As video editors, we can use RAID to ensure we not only enjoy optimum disc performance, but protect ourselves from unfortunate disc failures, and angry clients!

RAID is a set of schemes which dictate how data is divided and replicated across multiple discs. It can be used to set the level of data security you require. These various levels are denoted by the word RAID and then a number.. e.g. RAID 0, RAID 1, RAID 5, RAID 10…etc.

As mentioned, RAID 0 offers the highest level of read/write performance, but offers zero data security. However, in the real world, regardless of whether you’re cutting news, documentaries, or drama, you’ll want some data security. Especially now with the prevalence of solid state memory recording, we’re less likely to have the tapes on the shelf to recapture from!

The 4big is connected to your computer using one eSATA cable, which simply plugs in to one of the four eSATA ports on an easily installable PCI-Express card.

Configuring RAID in conjunction with a LaCie 4big is as easy as putting the disc into RAID set-up mode and selecting the desired RAID number using a switch on the rear of the 4big. Using Disc Utility on a Mac, the array can then be formatted.

In addition to performance and security, changing the RAID configuration changes the available space on the disc. RAID 1 for example provides excellent data security, but divides the overall usable disc space by a factor of two.

On a 4big I tend to find RAID 5 provides the optimum solution for my needs, knowing that if one of the four discs fails, no video data is lost. With this particular set up, approximately 75% of the available disc space is usable, and performance is outstanding.

Of even more interest to those of us working with less compressed codecs, and needing higher performance requirements, is RAID 50.

RAID 50 requires a minimum of six discs. I have two separate 4bigs connected to two of the four ports on the eSATA PCI Express card in my Mac; 8 discs in total.

RAID 50 then is a RAID 0 stripe across two separate RAID 5 arrays. In practice, setting both 4bigs to RAID 5 and using disc utility to create one array across both 4bigs using RAID 0, gives me one very large, very fast and very secure volume.

I’m currently using this disc configuration to edit a piece shot in 4k with the Red One. As a Final Cut Pro user, I’m re-encoding using Apple’s Pro-res 4:2:2 HQ codec during the ‘Log and Transfer’ process. The resultant files are around 24Mb/s. My 2 x 4big array formatted RAID 50 provides read and write speeds of up to 480 MB/s and 270 MB/s respectively, and is proving way more than adequate.

But we all have different data needs, and the key thing to understand is the trade off between disc performance and overall disc space on the one hand, and data protection on the other.

Ultimately, the key to successful RAID configuration is obtaining performance which doesn’t slow your edit session, whilst giving you the peace of mind that all your work is safe in the event of drive failure.

Hard drive design is equally as important. A drive which remains relatively quiet and relatively cool is paramount. And let’s face it, if you have to live with them everyday, they may as well look good.

Those familiar with LaCie drives will know that design is as important as underlying functionality.

Recently, the legend Philippe Starck has been reacquainted with LaCie, designing for them the LaCie Starck Desktop Drive. Now, admittedly this product’s not aimed at us. It doesn’t even sport FireWire 800 connectivity for a start. But as Philippe Starck says, design isn’t only about how something looks; good industrial design takes into account the practical needs of the user.

The Rugged Hard Disc, with it’s bright orange shock resistant rubber sleeve, really wouldn’t look out of place hanging from your breathable fabric half way up a mountain on location. It sports a protective aluminium shell and internal anti-shock rubber bumpers. In fact its overall form suggests you could bounce it off the ground without repercussions. Let me know how that goes if you try it!

The Rugged Hard Disc has FireWire 800 connectivity so no problem there. Note though one of the limitations of the smaller disc form is disc speed, as they typically spin at 5400rpm. Fortunately LaCie provide both 5400rpm and 7200rpm variants of this disc.

By comparison, the Little Big Disc Quadra is one step up in terms of portable disc, weighing less than half of its larger brother in the Quadra family, yet sporting very much the same look. It also comes in 5400rpm and 7200rpm variants, the latter being 640GB in size.

The Little Big Disc Quadra is fanless, quiet, and should you need it FireWire 800-bus powered, meaning that if you’re short of a mains socket you’re still in business. It also sports eSATA 3Gb/s connectivity, and features two FireWire 800 ports, one FireWire 400 and one USB 2.0.

More interestingly, with eSATA connectivity, the Little big Disc Quadra offers data rates over 100MB/s, and connects happily to a Macbook Pro via the LaCie SATA II ExpressCard 34 which fits neatly in to the Macbook Pro’s ExpressCard slot. It’s an elegant piece of design.

Whether you’re half way up a mountain in a tent with a laptop, or down in the bowels of a studio working on a high-end masterpiece, we all have different data storage needs.

As video pros, the hard disc is the least celebrated piece of kit we own, often only referred to when things go wrong. It’s contribution to the production process going largely ignored.

However, what’s for sure is that technological change within our industry is as relentless as it has ever been, and with the move to a fully digital workflow almost complete, the hard disc is becoming more than just the proverbial bank, it’s an increasingly important friend. 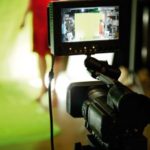 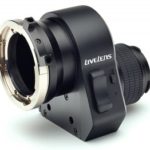 Facing his first film as DOP, Will J Carman needs to save time and...

As with most companies , the UK Fire Service has had to change and...
Read Here