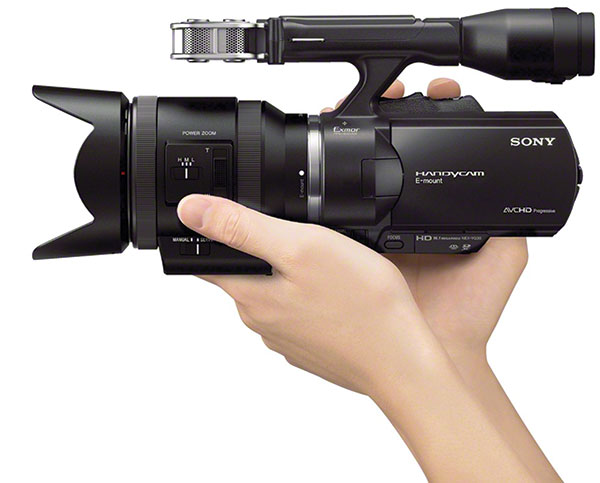 Unusually for a cameracorder of this class there is an adjustable shoulder pad. But you have to balance things up with accessories and lenses to make proper use of it.

What do you do when you’ve grown out of your DSLR but want a fully fledged ENG video camera for a similar price? You could do worse than to check out Sony’s latest NEX camera the EA50. The model has features on-board sympathetic to the ‘run & gun’ shooter but can you live with it’s DSLR origins? By ADAM GARSTONE.

When the Canon 5D Mk II was released, and film-makers suddenly saw the potential of this odd little stills camera, many people thought it would only be a matter of months before Canon repackaged the 5D’s electronics into a video camera body.

Instead, after several years, they produced the C series cameras, giving us all the things we love about the 5D (large sensor, low light capability) but with no moiré, decent I/O, CODECs and so on. The problem is that all those film-makers who could just about afford a 5D couldn’t afford a C300 (and even the C100 is nearly twice the price of a 5D Mk III).

Canon obviously had their reasons. Maybe it was simple, corporate structuring – video cameras are made by a different subsidiary to the stills cameras and there may not be any way of transferring technology from one to the other. Maybe they saw the 5D Mk II flying off the shelves and couldn’t see the point of cannibalising their own sales. Maybe the video camera subsidiary couldn’t bring themselves to make a product with those known DSLR limitations.

Whatever their reasoning, Sony seem to think differently.

The lens mount and sensor of the NEX-EA50 are sourced from Sony’s NEX stills camera range, by way of the NEX-VG30E Handycam, repackaged in a sort of ENG body. This is, by no means, a bad thing. The NEX-5 is winning its own fan base as a compact, interchangeable lens, stills camera with great video capabilities, and the NEX-EA50’s price point, on the street at about £2500 including VAT, makes it pretty unique.

The EA50 inherits the APS-C format (23.5mm x 15.6mm), 16.1 Mpixel sensor, and E-Mount lens system directly from the NEX-VG30E. The body is shipped with a 18-200mm, F/3.5-6.3 lens with servo zoom and Optical Steady Shot. The servo zoom is pretty slow at its fastest and I would prefer a larger maximum aperture, but those slight niggles pale next to my pet hate – the ‘endless encoder’ style manual focus ring. The big problem is that this control is both speed and position sensitive, so turning the ring faster has more effect than a slow turn. Whilst this sounds like it would speed up the process of focussing, in practice most people focus by slipping slightly past the focus point and then pulling back to it. This requires that the control be position dependent only – your brain kind of remembers where, in the turning of the ring, it saw best focus, so it’s easy to get back to it. The speed dependence of this control, however, means that the focus point isn’t where you ‘left’ it when you turn the control back. It drove me nuts! This isn’t the only Sony camera to suffer from this design feature, and Sony aren’t the only manufacturer who do it either, so I presume that some people like it. Let’s just call it Marmite… Fortunately, the autofocus is excellent.

A weirder feature, whilst we are here at the front of the camera, is the lack of ND filters. The E mount has a very short distance from flange to sensor – great if you want to make compact stills cameras, but not so good if you need to get a filter wheel in there. It’s possible– the FS700E has NDs – but too expensive for the EA50. You’ll need to invest in an ND system in front of the lens – no great sacrifice, but irritating in a camera that is so obviously ‘run and gun’ style.

Data from the sensor is compressed with AVCHD 2.0 (1920×1080) with a selection between 50Hz (giving you 50p/25p and 50i) or 60Hz (59.94p/29.97p/24p and 59.94i) at the standard AVCHD data rates up to 24Mb/s for standard frame rates and 28Mb/s for 1080/60p. Storage is MemoryStick or SD card (and HC and XC variants). There is also a connector for Sony’s Flash Memory Unit. AVCHD CODEC implementations are getting better all the time – the EA50’s seems pretty good, but you’ll still see some artefacts on fast moving detail and fine, high frequencies (like bare trees against the sky). If these artefacts put you off (and you have to do some serious pixel peeping to see them) then the EA50 has a clean HDMI output, with timecode support, that you could stuff into an Atomos Ninja, Sound Devices PIX, BMD HyperDeck Shuttle etc.

Sony’s little NEX-VG30E was the inspiration for the EA50.

Obviously, with that 16.1M, 3:2 sensor, only 13.6 Mpixels are used for 16:9, and most of those are thrown away for the 1080 data stream. Interestingly, this means that Sony can incorporate an up to 2x digital zoom by windowing the available pixels. In theory, this should be lossless though, in our tests, there was actually a very slight loss of resolution – however, the ability to zoom Sony’s range of affordable, prime E mount lenses is not to be sniffed at. You might expect the usual DSLR moiré issues with this type of sensor, but the EA50 seems not to suffer too badly – though moiré is there, if you go looking for it. You might also expect rolling shutter issues, and these you’ll find a-plenty. It’s no worse than a DSLR, but it is worse than most cameras with true, 1920×1080 sensors. Similarly, the EA50‘s pixels are much smaller than a large, HD sensor, so its basic sensitivity isn’t great. At least that means you don’t miss the NDs quite so much…

Overall image resolution (from the lens through to the recorded AVCHD) was also a little worse than cameras with similarly sized, but true HD sensors. There may be some software filtering going on here to reduce the appearance of moiré – and the AVCHD CODEC can be an issue – and the lens must be designed to a price – but, basically, the NEX-EA50 performs well for the money. We didn’t have time to test resolution using the HDMI output, or still photography resolution (which uses all 16.1 Mpixels).

Picking up the NEX-EA50 also suggests a more expensive camera than it is. The overall build quality exhibits that solidity that Sony cameras have had for a few years now. It’s plastic, of course, and lightweight, but things that are supposed to click do so positively and bits that aren’t supposed to creak or rattle don’t. There are plenty of controls for essential functions – one of the principle reasons for choosing this body style over an NEX-5 or DSLR – though I did find the positioning of the controls slightly counter-intuitive. If you own the camera you’ll soon get used to it, but an occasional user may find themselves staring at the side of the camera hunting for some function or other.

Unusually for this camera class, there is an adjustable shoulder pad, which works well with the LCD loupe. Unfortunately, the camera is slightly front heavy, so it doesn’t sit on your shoulder at all, making the whole thing a bit pointless. Nevertheless, with a heavier battery than the one supplied, and with some accessories screwed into the three threaded mounts on the shoulder pad (that HDMI recorder, perhaps?), it may become useful. There is also a lightweight 16-50mm power zoom lens (the SELP1650) which may change the camera’s balance sufficiently to warrant the shoulder mount.

The LCD has a decent resolution (1920×480) and there is both peaking and two levels of expanded view for focus assist (if you can get used to that manual focus ring). The LCD is also touch sensitive – which may seem odd when you have the loupe attached. However, Sony’s usual, clean, menu structure isn’t touch-enabled for the shooting (camera) menu – only playback menus can be driven with a digit, so you can swing the loupe out of the way (and clean the screen before you start shooting again!). Alternatively, there is a useful selection of buttons on the top of the body for playback control.

There are seven user programmable picture profiles (preset to useful configurations) with a couple of cine-like gamma and ‘color modes’ (matrices). Overall, I found the EA50 to be rather contrasty, so you might well need to play with these settings to get a nice ‘negative’ for colour grading.

The NEX-EA50 may seem like some hybrid creation from Sony’s Island of Dr. Moreau – half stills camera and half ENG/event camcorder, but in operation you tend to forget this. It handles well and feels good to use. Image quality is excellent for the price – nice tonality and good colour rendering, though with some obvious DSLR artefacts, and it’s made even more attractive if you already own Sony glass. Sony release so many cameras each year it’s getting hard to keep up, but at this price the NEX-EA50 stands out from the crowd. 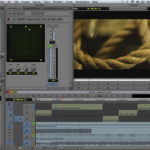 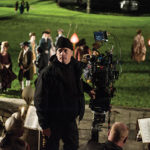