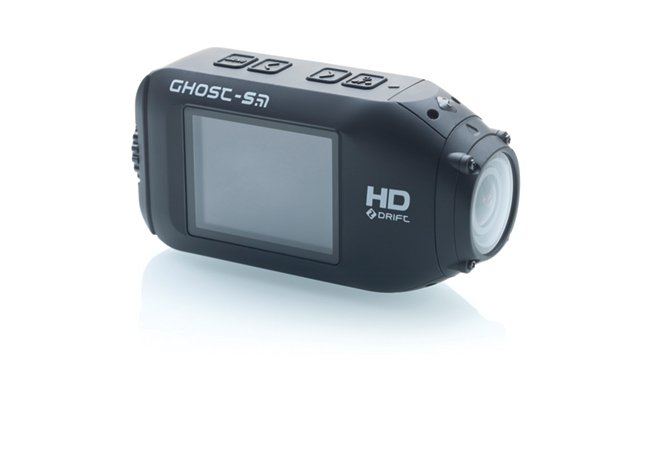 A new entrant in to the Action Camera market. Blackvue Sport might remind you of another famous action cam. It has a good spec and a range of accessories that are extra at checkout time. The Sport also has Smartphone Apps for iOS and Android.

ADAM GARSTONE reviews two of the latest ‘Action Cams’. One is the uprated model of his favourite action camera, the Ghost S and the other is a camera from South Korean company Pittasoft who are known for making ‘Dash Cams’. While Blackvue refer to the GoPro style of camera design, the Ghost S keeps with its predecessor’s ‘bullet’ design.

When they first appeared, action cams were pretty much only found bolted to the front of surf-boards, or stapled to the top of sky divers’ heads. Nowadays, everyone has a Go-Pro (or five) in their camera bags somewhere, and you’ll find them in use from documentary to period drama.

Go-Pros are the industry norm, but there are several other manufacturers out there, and Drift Innovations make one of our favourites – the HD Ghost. Drift have just released a new variant, the Ghost S, which adds most of the things that the older HD Ghost was lacking, and there is a new kid on the block from South Korea – the Blackvue Sport SC500 from Pittasoft.

Pittasoft are one of the best known names in dash cams, so the Sport SC500 is a bit of a departure for them. The Sport’s format is very like the Go-Pro Hero – basically a small rectangular box with the lens on the front – it’s not really an action cam without its waterproof housing which, unfortunately, isn’t supplied as standard.

What you do get as standard, however, is pretty highly specified.

The rear of the unit has a plug-in 2 inch LCD – highly reminiscent of Go-Pro’s BacPac (not touch enabled). Although there is no other display for the user interface, this does let you set up the camera with the LCD attached, and then remove it to make the smallest possible shooting configuration – you can still switch modes (video, photo, high speed) without the display attached, with the mode you have selected shown on attractive blue LEDs on the front of the camera.

The right hand side of the unit has USB and mini HDMI connectors, as well as the slot for the micro SD card, all hidden under a plastic panel which detaches completely, and so will get lost. The left side has the mic, power/menu button and the WiFi enable button. In the top, there is a big record button – there are long, thin record tally light LEDs on the front and top of the camera. The battery sits behind a sliding plastic panel at the rear of the camera (you have to detach the LCD to change it) and is good for a couple of hours without the LCD attached. Weirdly, the LCD doesn’t power down when you don’t need it, which artificially degrades your battery life if you leave it on the back of the camera. I suspect that this is just a feature which hasn’t, yet, been implemented – the firmware obviously is in its infancy.

The user interface is pretty straightforward – once the camera is powered on (it plays a happy tune) a quick press of the power button cycles though the modes, finally arriving at the settings menu. The record/shutter button acts a select button for the UI. The icons are a bit small and the buttons a bit fiddly for gloved hands, but it all works well enough. The WiFi button turns WiFi on and off, unsurprisingly.

Other than the strange omission of a waterproof housing, there is no remote control as standard – less obligatory, but they are handy.

Drift Innovation’s Ghost S puts right much of what was slightly wrong with the original HD Ghost. But you get the same attention to detail, solid build quality and well designed remote controls. Add to that a new sensor, new frame rates and a higher data rate and you have the best value action cam on the market.

What definitely isn’t like a Go-Pro is Drift Innovation’s HD Ghost S. This packs in all of the fantastic features of the HD Ghost but includes a new sensor and new processing, to address some, if not all of that camera’s shortcomings.

The Ghost S is a very robustly built – the entire unboxing procedure is a delight, with clever and attractive packaging (which acts as an accessories case) and a camera itself that oozed quality. The camera body is magnesium alloy finished in satin black, with firm, well spaced rubberised buttons and a built-in LCD covered with Corning’s Gorilla Glass. The bullet-shaped body, without the optional polycarbonate housing, is waterproof down to 3 metres and is a far more aerodynamic shape that the Go-Pro. The overall finish of the camera reminds me of something like an expensive dive watch – precision in a tough case. One of the best features of the body design is the rotating lens and sensor assembly – you can mount the camera body any way you like, and then rotate the lens by up to 300° to level the picture. There is even a tripod mount – an obvious requirement for a camera, but missing from much of the competition.

All this solidity does make the Ghost S heavier than the Blackvue (and a Go-Pro), but it’s not a weight you notice on a helmet – and the better shape and mounting options help here too – and for most other uses the additional weight won’t be a real problem, unless you want to sling the camera under a small drone. The only other issue is that the shape precludes a chest mount.

Like its predecessor, the Ghost S has a built-in 2” LCD screen, allowing it to have a simple and intuitive user interface, accurate framing, instant playback – obvious requirements for a video camera, but missing from some of the competition unless you buy optional extras. Four rubberised buttons on the top of the camera provide everything you need for the user interface. There is an Action button (power on/off, record/stop), two cursor controls (forwards and back) and the Menu button. Pressing the Menu button when the camera is recording (or pressing Action on the remote) will capture a still image, without disturbing the video recording. There is an interesting video mode, called Video Tagging. This mode continuously records video (the loop length is adjustable up to five minutes) – pressing Menu stops the looping, effectively capturing events that happen before you press the button, plus an equal time after the event. So, for instance, if you set up a 30s loop, pressing Menu records the previous 30s, the current 30s and the next 30s – 1m30s in total.

In front of the buttons, right over the lens, is a multicoloured function/tally light. The colour shows you what mode you are in – green for video, yellow for stills, magenta for the intervalometer, and cyan for the programmable stills burst. Red is, of course, reserved to show you that you are recording. The user interface displayed on the LCD is simplicity itself, with large, friendly icons and intuitive navigation. The LCD permanently displays which mode you are in and its settings, the percentage of memory card available and battery life. There are no audio meters, but then there isn’t any way to set the audio level, even though there is a 3.5mm jack for an external mic under the waterproof back cover (there’s a built-in mic too). Removing this back cover also reveals the battery compartment, USB and HDMI connectors.

Speaking of the battery, you easily get three hours of run time, which leads the class in this type of camera. Good battery life is vital for an action cam, where changing batteries in inaccessible places and hostile environments is a nightmare.

The Ghost S is supplied as standard with a fabulous little remote control. This light, wearable unit also has a simple user interface – two large, rubberised buttons, and highly visible, multicolour LEDs running both sides of the case. The colours of the LEDs echo the mode setting of the camera. The remote is in two-way communication with the camera, so you don’t get the record tally lights on until the camera is really in record (nice) and can be charged over USB (the Li-ion battery lasts about 8 hours, but can’t be removed). It can control shooting mode as well as record/stop, and can put any number of cameras into record simultaneously, from up to 10 meters away.

WiFi is also standard on the camera. At the time of writing, Drift Innovation’s iOS and Android app doesn’t talk to the Ghost S, but I’m assuming it will be the same as the communication with the HD Ghost, allowing full control of the camera, viewing of the live video feed and putting the camera into record. The current implementation doesn’t display video whilst the camera is recording, which is a shame. Also, I would have liked to see some security implemented on the WiFi connection.

All this is the same as the older HD Ghost – no bad thing as that camera is fantastic, but somewhat limited in framerate in comparison to the competition. This has been addressed with the Ghost S. The new, 12 Mpixel sensor and internal electronics allow for 1080p at 25, 30, 50 and 60 fps, with 720p up to 120fps and WVGA at up to 240fps. Unlike the Blackvue, sensor windowing gives multiple fields-of-view, of 90°, 127° and 160°. Although, at its widest setting, the Ghost S has a larger FOV than the Blackvue, it exhibited less barrel distortion, though ‘less’ is a very comparative term here – there is still a lot.

Other than the barrel distortion I mentioned earlier, the pictures from the Blackvue and the Ghost S are similar, with the Ghost at its ‘Normal’ data rate. The Ghost S has a bit more saturation and contrast to the image, so you can pull a bit more out of the Blackvue’s shadows and highlights. At the higher data rate, the image from the Ghost S is much sharper – in fact a little too sharp, showing some moiré and jagged, pixellated lines in high contrast areas. I suspect that there is some software image sharpening going on here, and it’s overdone a bit – Drift Innovation are very good at pushing out firmware updates, so they may address this slight issue.

The Blackvue SC500 is a worthy addition to the action cam lineup, though they need to bundle it with a waterproof housing to justify the ‘sport’ epithet, and I would like to see some ‘PAL’ related framerates. It’s likely to be a similar price as the Go-Pro 3+ Silver, which doesn’t have the LCD but does include the housing.

The Ghost S takes the best made action cam you can buy, and adds the higher frame rates that ‘action’ really needs. I would like to see a low contrast image mode, and the slight pixellation sorted out, but it’s definitely the camera I would want in my bag – especially given the price of about £330 inc. VAT – compare that to the Go-Pro Hero3+ Black (£360 plus £80 for the LCD). 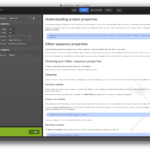 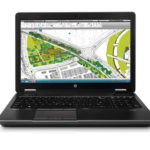