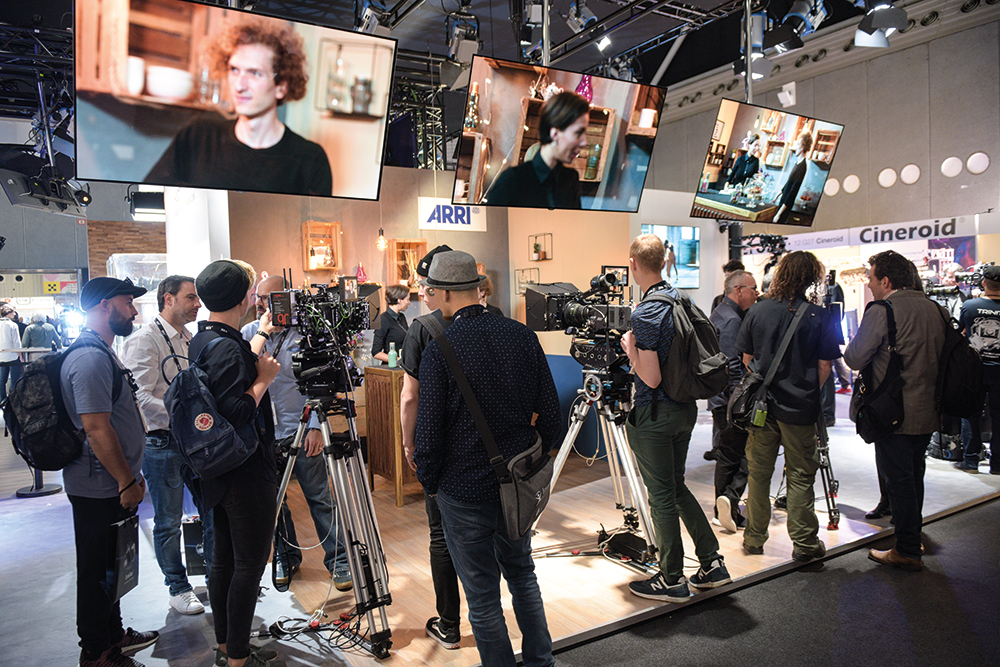 Through most of the 2000s, changes in cameras have been prompted largely by the desire to properly replace 35mm negative. Now, the push for resolution, dynamic range and colour to match the capability of a century of narrative filmmaking is largely a won war. Many cameras go significantly beyond what film could ever do, or at least, they go beyond what 35mm cinema could do. Now, in late 2019, digital camera manufacturers aren’t so much reaching for Super35, they’re reaching for Imax. Partly that’s because distributors are trying to future-proof their material with 4K origination, but it’s also because the most immediate way to create a camera with bigger numbers is to put a bigger sensor in it.

Arri declared an interest in this field early with the Alexa 65. Announced all the way back in 2014, it was immediately an attractive prospect: Alexa pictures at 6K resolution. Practically, though, the size, weight and power consumption raised eyebrows even among crews used to the conventional Alexa, which wasn’t particularly small, light nor power-frugal to begin with. LF was an achievement in that it packed a lot more pixels into a chassis barely larger than a conventional Alexa. By that time, though, the Alexa Mini (launched in early 2015) had become popular.

Alexa LF Mini was announced in March this year and Arri tells us that ‘current prototypes’ are a comparatively featherweight 2.6kg and roughly equal in size to an Alexa Mini. Power consumption is a relatively restrained 65W and the camera will record 4.5K up to 60fps, and HD up to 90fps. Both the Mini and conventional Alexa LF sacrifice the 6K resolution of the Alexa 65, compromising with a still-admirable 4.5K. The benefit is compatibility with lenses designed for a sensor roughly the size of a stills negative – Alexa 65, and 65mm film, both demand lenses with medium-format coverage.

In some ways, ‘large-format’ is something of a misnomer since it more generally refers to stills formats significantly larger than a 35mm stills frame. Still, if the LF Mini is designed to offer a no-compromise 4.5K Alexa for fussy, over-the-top broadcasters, and without requiring a wagon train full of support gear, it is a success. CVP list the body for £41,360,
plus VAT.

DOP Michael Seresin with an Alexa Mini LF at IBC 2019

Anyone with a less understanding bank manager might think about Sony’s FX9, which appeared at IBC and seems cast as a full-frame version of the FS7. As such it’s lighter than even Alexa LF; at 2kg body only, it consumes a positively miserly 35.2W while offering 60fps in 4K and 180 in HD; the full sensor is 6008 x 3168. On-board recording is in Sony’s H.264 variant, XAVC, in a variety of intra-frame or long-gop bitrates up to a healthy 600Mbps. There is no on-board Raw recording, but Atomos has announced that capability in conjunction with Sony’s XDCA-FX9 extension unit.

The XDCA-FX9 also provides V-lock battery compatibility (no bad thing, even at 35 watts) and a DWX-compatible audio slot. There is no mention of ProRes recording, which the equivalent XDCA-FS7 extension unit offered for the FS7. Sony showed the FX9 at IBC with the upcoming 16-35mm lens, a semi-manual design similar in concept to the existing 18-135mm options that have been widely deployed on the FS7. Covering the FX9’s full-frame sensor, these lenses suit the camera’s E-mount and might help blunt the sticker shock that goes with fast, high-ratio, full-frame zooms. One signal advantage of the E-mount is that it is probably the shallowest in the industry and is therefore adaptable, at least mechanically, to suit more or less any piece of glass ever made. The camera lists for £10,000 plus tax.

The world of broadcast

Going by the sheer number of hours shot, high-end production cameras for narrative drama are positively rare compared to the thousands of ENG cameras that are rolling at any given moment. That’s reflected in the continued development of traditional, shoulder-mounted broadcast cameras such as JVC’s GY-HC900. Promoted as the ‘connected cam’, the HC900 is of standard physical layout, but offers huge on-board networking and communication facilities. With 5G networks on the cusp of rollout, there’s probably never been a better time to nix the satellite truck and send the material back to base via a couple of mobile phone links teamed up, and things are only likely to improve. Satellite providers might well feel nervous, not necessarily of JVC’s many developments in the field of mobile phone video links, but because of what they hint at in future.

While the communications technology is great, Sony reminds us that there’s still somewhere for sensor tech to improve. The 4K PXW-Z750 is, again, of the tried-and-tested ENG layout, but crucially has a global shutter sensor. Whether we’re stuck in a press pack full of flickering camera flashes or shooting the whirling blades of a helicopter, the ability to avoid distracting rolling shutter artefacts is one that most people would like to see migrate up to the much larger sensors of production cameras, too.

Not to be outdone in the world of lightweight, full-frame cameras, Canon announced the EOS C500 Mark II days before IBC. The C500 Mark II is to the C700 FF much as the Alexa Mini LF is to the full-size Alexa LF. Canon enjoys massive experience making full-frame cameras, having launched possibly the first full-frame motion camera in the world, albeit perhaps by mistake, in the guise of the 5D Mark II. The C500 Mark II is under two kilos and has a 5952 x 3140 sensor recording to either XF-AVC at 810Mbps or Canon’s cinema Raw at 2.1Gbps. For the size and weight it is incredibly capable, offering the full 6K sensor at 60fps or 2K at 120fps.

One significant Canon plus point is a long-term dedication to autofocus, and more or less the only autofocus option that’s ever been taken even slightly seriously by the film and TV industry. While it’s not a new feature in the C500 Mark II, the increasing affordability of full-frame video cameras is likely to mean they’re deployed on smaller, faster-moving productions that are less well-equipped with people and time to perform high-precision manual focus pulling. That concern has almost certainly already sold both lenses and cameras for Canon. At £14,200, the C500 Mark II is not quite in the indie filmmaker range, but it’s certainly increasing the number of productions that can afford to shoot full-frame pictures in Raw.

To address the indie filmmaker question – or perhaps the crash-cam question – we can stay in full-frame world with the Panasonic S1H. It is ostensibly a stills camera, albeit a beast of a stills camera at around a kilo, compared to the 890g Canon EOS 5D Mark IV. The S1H has several things that manufacturers have historically been hesitant to offer in stills cameras, including 10-bit recording at up to 400Mbps with 4:2:2 colour sub-sampling and intra-frame compression using either HEVC or H.264. There’s a waveform monitor and a 22 watt-hour battery that sounds small, but for a stills camera is fairly gargantuan.

While codecs can vary in quality, that’s a very useful combination of features, especially for a £3600 machine that can (briefly) sit in one hand and masquerade as a stills camera. There’s enough spare resolution on the S1H to shoot 4K from a super-35mm-sized area of the sensor without scaling, and while maintaining the 400Mbps bitrate. Frame rates go up to 120fps in HD, albeit recorded as more heavily compressed 8-bit 4:2:0. In the end, the S1H is reasonably expensive, and it’s a mirrorless camera that’s heavier than many DSLRs, but Panasonic will attract attention for having included features that previously existed only at the high end.

One camera range that is pointedly not selling a full-frame option is Red’s Ranger series. A Ranger camera with the company’s Monstro full-frame sensor, available only to rental houses, had emerged earlier in 2019. At IBC, however, Red announced the Helium and Gemini sensors would be available for sale in the Ranger chassis. As a departure from the modular DSMC series, Ranger is an integrated body design that weighs about 3.5kg and records Red’s usual selection of its own proprietary codec and, optionally simultaneously, ProRes.

The choice between Helium, at 8192 x 3456, and Gemini, at 5120 x 2700, is more or less a statement of the core compromise of modern camera design. Both cameras have sensors just a little larger than the traditional Super35 camera aperture, and it’s been shown in the past that 8K is a lot of photosites to fit on a fairly small area of silicon; the Gemini is therefore a nice choice to have. Helium achieves 60fps when recording the whole sensor, Gemini 96fps. The company claims 16.5 stops of dynamic range for both, though that’s a rather larger claim even than some cameras with considerably less dense sensors.

It’s been shown in the past that 8K is a lot of photosites to fit on a fairly small area of silicon, so the Gemini is a nice choice to have

To finish on something completely different, consider the Chronos camera line from Kron Technologies. For a long time, the company’s Chronos 1.4 camera has been beloved of the YouTube generation and its fascination with things slowly exploding.

The 1.4 camera, while capable, is limited to 1280 x 1024 resolution at 1057fps, and resolution falls off with frame rate, with an approximately standard-definition 640 x 480 image affording up to 4436fps. The Chronos 1.4 was therefore never really a tool for film and TV work, if YouTube is meanly excluded from that category.

So, it was a product begging for an update. That update emerged at IBC in the form of the Chronos 2.1, a camera with a four-thirds-inch sensor capable of shooting HD images at up to 1000fps. There are 8, 16 and 32GB recording options for up to 11 seconds of record time, and the company advertises a
500 ISO sensitivity for the colour version. With high-speed cameras sometimes struggling for light, the monochrome version – where the omission of the colour filters lets all the light hit the sensor – will make sense for scientific applications. Yes, regular users of Vision Research’s Phantom range will scoff, but the Chronos 2.1 is on pre-order for $5000 and that is not a price point at which established high-speed cameras really compete.

Away from the specialist area of high speed, though, productions willing to exchange the focus puller’s sanity for a full-frame sensor have a lot of options, and all those options have plenty of room for big photosites that keep images quiet, and make for high dynamic range.

If what I’ve just described sounds like something we’ve all heard before, though, consider this – do you remember when Super35 sensors were considered big chip? 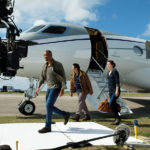 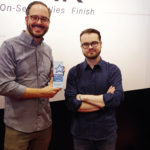