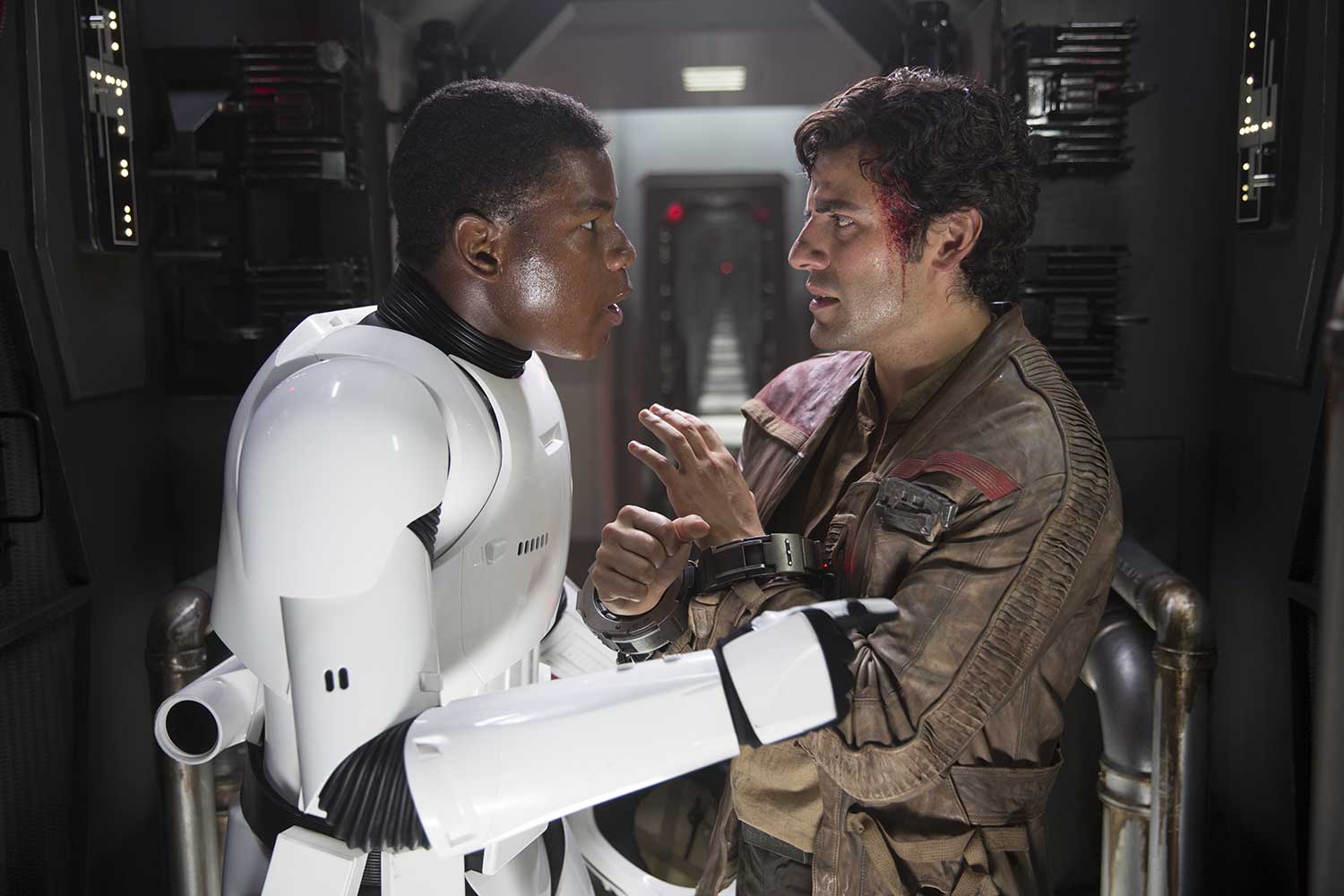 There is no obvious sound of relief in the voices of Maryann Brandon and Mary Jo Markey, the editors of Star Wars: The Force Awakens. Along with the director, J.J. Abrams, of course, they felt the pressure of the fans’ expectations for this film, but the record breaking box-office and the generally positive reviews must have come as a welcome liberation.

Along with associate editor Julian Smirke, Maryann and Mary Jo talked to us about the process of editing one of the most eagerly awaited films in the last decade. Warning! There may be spoilers.

Definition: Let’s get the technical stuff out of the way first. Can you tell us about the edit suite setup?

Julian Smirke: We had between 8 and 12 Avid Media Composer suites running at any one time. Back at base we have an ISIS 5000 but, for security reasons, we used a variety of networked Pegasus RAID drives when we were editing on location in London. That network was totally detached from the Internet or from any kind of outside access.

Mary-Ann Brandon: Security was a really, really big deal – for us and for Disney. There is no way we could be allowing access to footage over the internet or anything like that.

Definition: With such a long project, do you stick with the one version of Avid, or do you upgrade to new releases as you go along?

JS: We started the film with Media Composer 7, but quickly moved up the versions to 8.4, which is the latest release I believe.

Definition: Mary Jo, at EditFest London a couple of years ago, said how much you rely on Avid ScriptSync. As Avid discontinued the automatic sync feature in newer releases, did this cause you any issues?

MB: Actually, that was one of the first things we called Avid about when we started the film. Fortunately, they explained that ScriptSync still works, but you have to sync the clips to the script manually. That was really important to us – we could have worked around it but it would have been really bad.

JS: To be honest, we always checked the automatic feature of ScriptSync by hand anyway – you can’t have it feeding the wrong clips to the editors. It just gave us a massive head start on the process when the dialogue recognition worked.

Definition: How much time does it take to do it manually?

Mary-Jo Markey: We had an assistant working full time, throughout the whole process, just to manage ScriptSync.

JS: There is a fair bit of manual work preparing clips for the edit. Most scenes would have 2 or 3 cameras running – many more in action sequences – so we need to multicam them. But shooting on 35mm, and some 65mm, it’s not just an A, B, and C camera set up. Some cameras would run for a while in each take, then stop, and then pick up again later in the take. We need to check that each camera is synced correctly in the multicam, so that Maryann and Mary Jo can concentrate on editing without being thrown by technical issues.

MM: And whether you’re using ScriptSync or not, you still have to watch all the dailies carefully, because you don’t want to miss a little gesture or silent beat that occurred between the lines of dialogue and may have only happened in one take. You may see a great little reaction from Harrison, for instance, that you could miss if you rely only on ScriptSync.

Definition: When do you get involved in a film like this?

MB: J.J. sends us a script as soon as one is ready. Mary Jo and I read through it and prepare script notes – if there are things that worry us – and then we meet with J.J. to discuss them. Usually he tells us how he is going to manage those areas so they won’t be a problem. There may be some previz to look at, but J.J. doesn’t really use it that much – he prefers to do as much practically – on set – as possible. We get the suites all set up in the week before the shoot starts, so we’re ready to start cutting on day one.

Definition: And how do you work together?

Definition: And how much can J.J. be involved when he’s directing?

MM: J.J. doesn’t look at our cuts while he is shooting unless he wants to see whether he has gotten what he wanted on a day, or one of us has a concern about a scene and is not sure it’s working or that he is going to be happy with it when he sees it in post.  He prefers to focus on shooting during production and he trusts us to bring possible problems or questions to his attention. After principal photography is finished then he is very involved.  But our cut of each scene is the starting point then.

Definition: Do you work with temp music? Obviously, many of the themes have been around since 1977!

MM: J.J. is very particular about music. The wrong temp music can really throw him out of the scene so, unless there’s a particular point that really needs it, we’ll cut without. With a film like Star Wars, you can’t usually even spot in sound effects – you know, there usually isn’t anything right in your effects library.

MB: There are a couple of scenes that rely on sound effects – in which case we’ll add them in.

Definition: Like the shot you hold on Finn and Rey in the forest, when they’re stopped by the sound of Kylo Ren’s lightsaber.

MB: Yes, or I’m thinking in particular of when they run into the tent on Jakku, and Finn recognises the sound of the TIE fighter engines as they approach. He knows what’s coming – the terror that it brings – just from the sound.

Definition: And how do you work with the VFX scenes before there are any VFX?

MB: Actually, we have to work on some of those VFX scenes and get them off to ILM really early, or we just wouldn’t have hit our schedule. Generally, J.J. has done as many practical effects on-set as possible, so we usually have plates to work with for the edit. Most of the elements will be there – in the frame. It’s not just, you know, a guy against a green screen. If necessary, we’ll put in a card just saying something like “Falcon flies left to right”. In just one or two scenes there were a lot of those cards – like in the Falcon chase. Did you have any idea what was going on in that chase Mary Jo?

MM: (Laughs) No, but we have a really good relationship with the VFX guys. Sometimes we’d just phone them up and ask what’s supposed to happen in this scene!

Definition: Were any of your decisions in the cutting room intentionally referencing the original Star Wars movies?

MB: Not really, other that things like some of the wipes we used.

Definition: But some moments were definitely put in just for the fans – like the introduction of the Millennium Falcon.

MB: That was scripted that way, of course, though we helped it along by dropping in the Falcon’s music cue. It’s a moment for the audience to cheer.

Definition:  How much gets changed between the shooting script and the final film?

MM: Oh, a lot! We change scenes around in the structure of the film all the time. A good example is the scene where Kylo Ren is having a private moment, talking to the helmet – in the script this came just after Finn and Poe escape, and he was berating himself for having recognised that Finn was a potential traitor, but not having dealt with it immediately. We felt it was wasted there. In the final film, we moved it later, and he’s talking about resisting the Light Side of the Force, fearing what may happen when Han Solo arrives, and it was  a much more meaningful and stronger use of the footage.

MB: And the script had us meeting Leia much earlier. We felt it would be better to meet Han and to get some of the history between them, and then to see Leia though his eyes when the moment came.

MM: So scenes get moved not to clarify the story – we don’t usually need to do that. We move scenes for emotional reasons, for the feel of the character development. And we change dialogue in the scenes all the time. For the CGI characters this is usually pretty easy – they are usually recorded later in the schedule – but J.J. has always been really open to shooting pickups with new dialogue on-set, or back at Bad Robot.

MB: Re-writing scenes in the cutting room is something we started doing together with J.J. back when we were making ‘Alias’, so we’ve been used to it for a long time.

MM: We changed a lot of Snoke’s dialogue, and Maz Kanata was originally a very different character. She evolved as we were cutting her scenes – we had her spend more time with Finn and Rey – but particularly with Finn to drive his character forward. So when we start assembling a scene, we don’t only take the footage we have and make the best scene we can with it. We are always aware that we can solve problems if we need to by coming up with new dialogue.

Definition: Is there a danger in that? It’s like the tyranny of the empty car park – if you drive in and there is only one space then you park in that space, but if the car park is empty you have too much choice. Should you park by the ticket machine or by the elevator?

MB: (Laughs) It’s happened once or twice, but not often. It’s so useful to be able to rewrite as we edit we wouldn’t want it any other way – when we assemble a scene, the possibility of rewriting to get around a problem is usually at the back of our minds.

MM: But it’s important to say that there is no formula to cutting a scene. We can’t say, “Oh, you do this and do that”. It’s about reading the script, looking at the dailies, looking at the performances, and making decisions from that.

In their final thought of our interview, both Maryann Brandon and Mary Jo Markey wanted to express their admiration for J.J. Abrams in producing a great film – a film that was all new, but that fitted so well into the world of the first Star Wars films. It’s a nice sentiment, but you have to suspect that J.J. would say he had a lot of help. 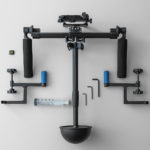 Vatican TV Carries On Their 4k Transition With Fujinon Lenses 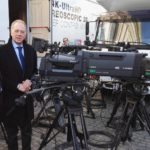