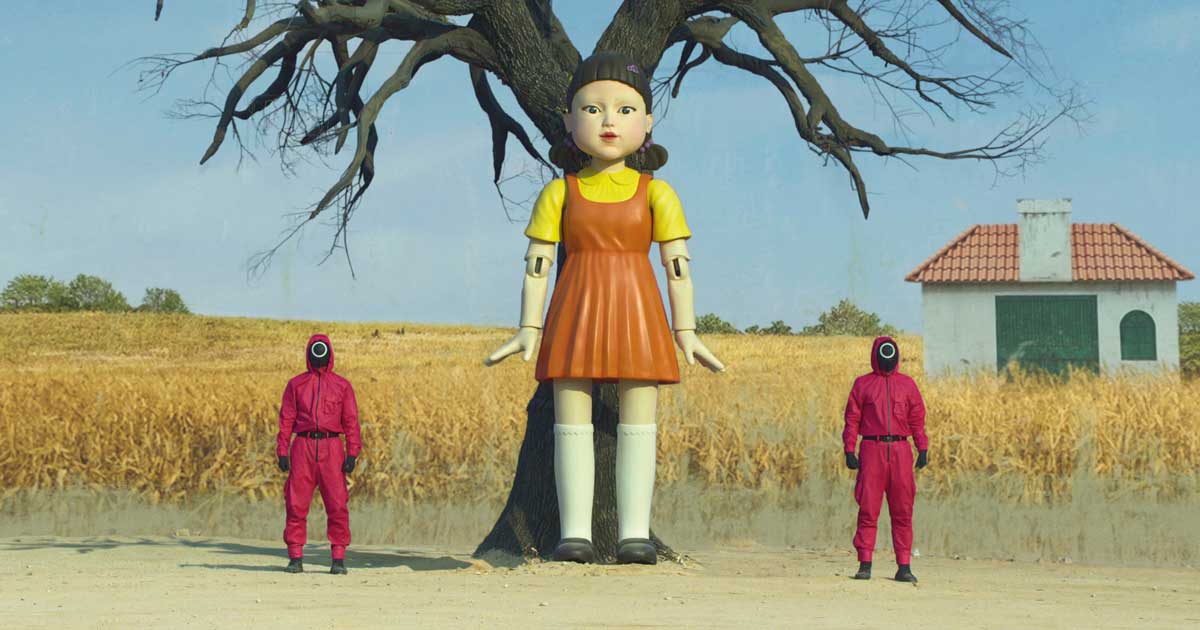 The world was blown away by the Korean Netflix sensation Squid Game. But it’s the astonishing sets illuminating this brilliantly original production that have helped it soar into stardom

Every time it seems that the latest Netflix phenomenon can’t be topped, another show comes along and blows it out of the water.

From Money Heist to Breaking Bad, A Series of Unfortunate Events to Sex Education, it’s undeniable that the streaming giant is a trailblazer for atypical and eccentric production.

But its latest sensation, Squid Game, enters a whole new arena of extraordinary creativity. After the success of Korean Oscar-winner Parasite, the west finally seems to have opened its eyes to the exceptional talent and content that Korea has been pumping out for a long time.

Squid Game focuses on Player 456, Seong Gi-hun, performed masterfully by Lee Jung-jae – a likeable and enigmatic protagonist, despite his clear flaws and self-destructive personality. The story sees him enter the dystopian Squid Game arena, as one of 456 destitute players, vying to win a colossal glass piggy bank of money. To be exact, 45.6 billion South Korean won.

It doesn’t take them long to realise they are part of something far more sinister than traditional youthful pastimes, and that it is a Hunger Games-style bloodbath – each death dolloping another 100,000 won into the bank. From cutting a perfect shape out of a honeycomb in a gigantic playground, to a deadly tug of war, the childlike imagery makes it all the more chilling.

One would think the creator and director of Squid Game, Hwang Dong-hyuk, would be filling his own glass piggy bank with cash after its unprecedented success – especially considering that it recently surpassed Bridgerton to become the most successful Netflix series of all time.

However, he has been dealt an unfair hand. He first wrote the series way back in 2009, and was rejected over and over again by different streaming platforms. He was only signed by Netflix in 2019, in a move to ‘expand its foreign offerings’. Yet it seems the broadcasting behemoth has reaped the benefits of the comparatively small contract that was originally signed – having not paid him any additional profits from its one-of-a-kind success. To recognise Dong-hyuk’s masterpiece as his own achievement, rather than Netflix’s, it’s time to take apart the elements of Squid Game that make it so groundbreaking.

Namely, its rich, magical-realist, life-sized sets – their striking nature a catalyst for the series’ achievements within the production space.

It seems impossible to believe that CGI or special effects were scarcely used when creating the brightly coloured and unique sets seen throughout the series. Instead, establishing a whole new benchmark for dystopian production, almost every single set was built to scale.

A stunning example of this is the set for the third challenge, tug of war. The players compete on towering platforms, wherein the team that pulls the hardest plummets the opposition to their deaths. These platforms were built to be over 33 feet high, allowing the actors to unlock the fear that their characters would feel.

This realism is also notable in the iconic first challenge, ‘red light, green light’, in which all 456 players partake in the initial game, knocking out hundreds of competitors. The scene’s freakishly huge, motion-detecting doll spins round and ‘eliminates’ any players moving after ‘red light’, its robotic eyes scanning the huge arena for any signs of movement – dealing with it in lethal terms.

Usually, for scenes of this size that demand swathes of actors, producers turn to technology to generate the other life forms. However, the arena for this challenge was, of course, true to size. This called for a cast of over 400 extras to partake in the scene, and in turn, elevated the thrilling nature of the finished cut.

Reading between the props

Layered throughout Squid Game’s enormous sets are hidden messages – so many, in fact, that it’s impossible to pick up on all of them after one sitting. These small – or sometimes big – details within the sets are hints and clues that foreshadow upcoming events.

The loudest of these is found in the set most present throughout the series: the dormitory. The room itself is enormous and striking, with its piles of bed frames (said to be made using tunnelling equipment) that cover the circumference of the large space in descending stacks – each one emulating the life of an individual player.

Park Hae-soo, who plays the villainous Cho Sang-woo, stated in press interviews that the dorm felt as though one was acting in the Colosseum – due to the sheer size of the room and its tiered format.

As players are gradually eliminated, we see these stacks of bed frames begin to thin out. Particularly after the fight scene; where players eliminate themselves during the night, mass-murdering one another in a dynamic moment of collaborative derangement.

As the bed frames come down, the walls gradually become visible. They are littered with markings and childlike drawings. On closer inspection, it becomes clear that each of these illustrations depict all six challenges that the players are due to take part in, providing a massive plot clue. Both the characters and the viewers are so deeply drawn into the unfolding events, that this giveaway – shown in-shot time and time again – is easily missed.

There are also multiple set clues to the truth behind the ‘Old Man’, one of which is during the marbles challenge.

This process sees the masked soldiers demand each of the players partner up with one another. Naturally, they instinctively select those they have grown to trust. Unbeknown to them, they are choosing the one person they will be competing against to survive the next round.

The marbles challenge takes place in a large space, built to look like the narrow streets and walls of a town. The Old Man has a breakdown when entering, which we discover is part of his act. It is clear his character is attacked with nostalgia on arrival, stating that the set strongly resembles where he grew up. This, paired with the childish challenges, is a major hint towards how the games are built around the Old Man’s character.

The cast had received the script long before they actually saw the sets in person, and were said to have felt a similar sense of nostalgia when entering the marbles set.

Among the plethora of hidden messages laced throughout the nine episodes, there are instances where the immense sets, in collaboration with the show’s actors, recreate famous artworks.

Perhaps the starkest of these references is to that of the famed lithograph print, Relativity, by MC Escher.

An iconic image in which the rules of gravity do not apply, the legendary artwork is mirrored in the dazzling depiction of the staircases within Squid Game; where the depleted players endlessly clamber between challenges or return to their colossal dormitory. 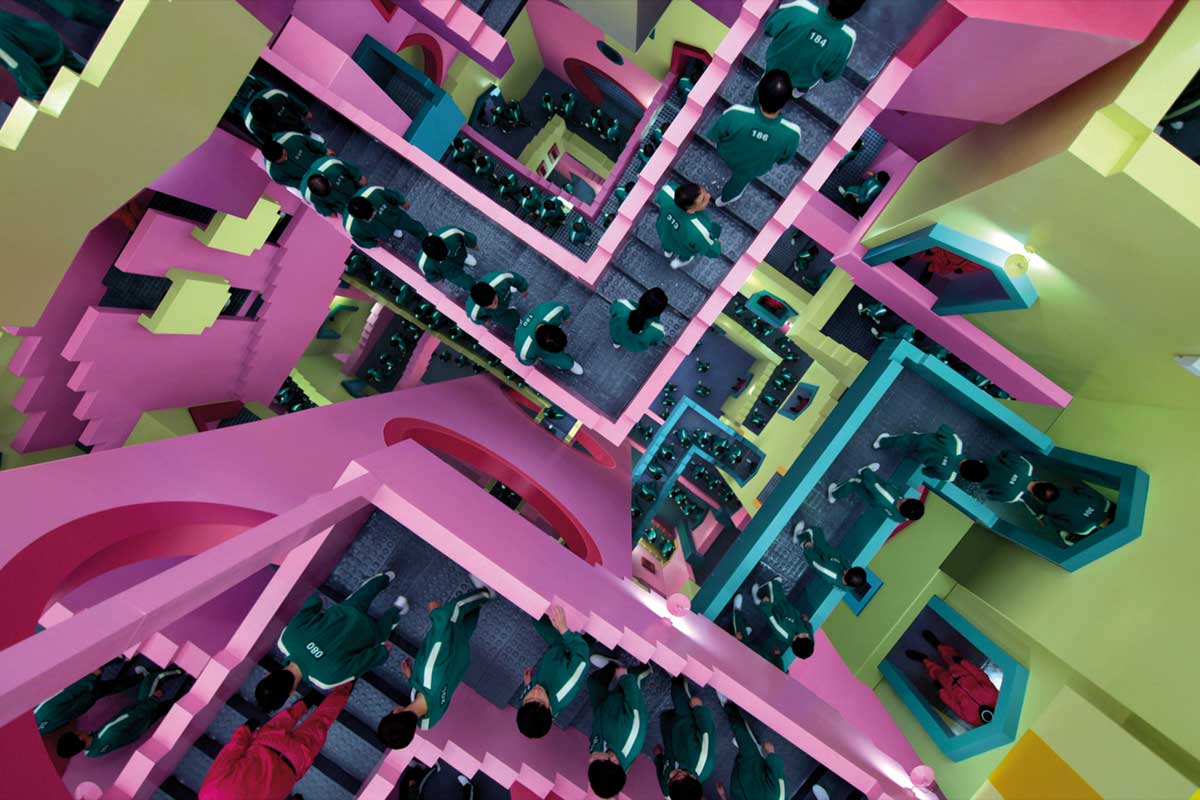 As the players trudge towards the next bloodbath, the bold portrait acts to create tension – and it is sobering upon their silent return, as they process the trauma of the events they have just witnessed (and committed).

It hints at how the laws of morality have been removed, mirroring Escher’s omission of gravity – making it such a thought-provoking piece of art. Use of surrealism highlights the removal from the players’ everyday lives.

Another evocation is thrown into the viewers’ faces during ‘red light, green light’. After the first players are shot, blood splashes onto the competitors behind. The camera trombones onto a female player; her hands placed on each side of her blood-spattered face to create an image that is, through gestures and colour palette, reminiscent of Edvard Munch’s famous painting The Scream.

Additionally, there is a depiction of feminist artist Judy Chicago’s The Dinner Party, for the ‘Last Supper’ scene with the final players. To be able to meld set design with art and performance in this way demonstrates astounding production chops from Dong-hyuk and his team – portrayed in a supersized format. 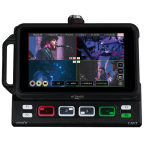 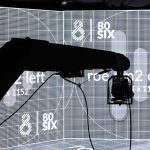 Gunda employs careful filmmaking techniques to offer an intimate look at the lives of...

Pachinko challenges the viewer to invest early, and reap the benefits of a tale for...
Read Here