Record And Store For ‘Need For Speed’

From Codex on-set recorders to TerraBlock shared storage enabled a complete rough cut of the movie by the time it had wrapped.

DoP of for Need For Speed Shane Hurlbut knew he was on a high technical mission when the director eschewed heavy VFX for on-set realism. Some sophisticated record and storage tech came to his rescue.

Bandito Brothers Sr. Director of Post Production Lance Holte. “Having an high-performance solution like TerraBlock proved essential on this project, especially for working with 4K RAW footage; it allowed our editors to collaborate more efficiently, and handled everything we threw at it – even when hammering multiple machines with heavy volumes of data, giant file sizes and numerous streams.”

Codex Onboard S recorders were used to capture intense racing sequences and other material. Cinematographer Shane Hurlbut ASC deployed eight Codex recorders to support more than 35 cameras that were used to shoot the movie, often under the most extreme conditions.

Hurlbut’s camera package included multiple Canon C500s and ARRI Alexas. Prior to the start of production, Hurlbut conducted tests with the cameras and Codex recorders to ensure they could stand up to extreme conditions and deliver the expected results.

“We placed an Onboard S in a car, then drove it around a track at 135mph; it came through with flying colours,” said Hurlbut. “Codex recorders are tried and true. They can take the pounding, vibration and speed.”

Hurlbut noted that Codex recorders were also essential to recording high-speed media with the C500. “Codex recorders are my go-to device for the Canon C500 – without them you can only capture 1080p. 120fps, 72fps, and 48fps were rolling on every stunt event, and that was for 58 out of the 67-day schedule.” 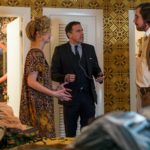