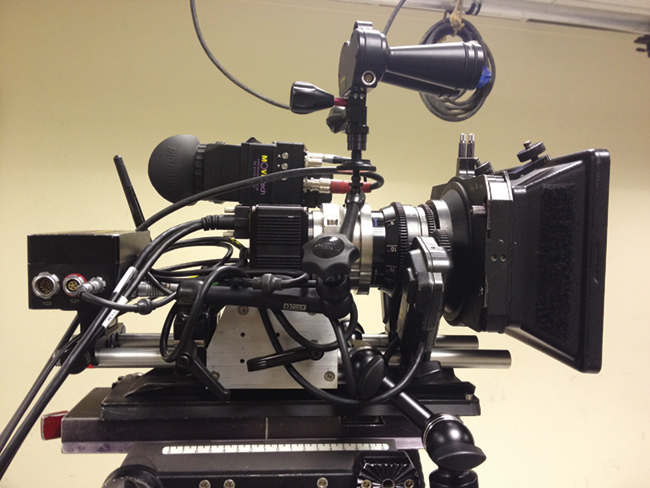 Loving The Alien. The Shooting Of ‘Under The Skin’

Scarlett Johansson as the alien. All images courtesy of Studio Canal/Dirty Looks/ One Of Us

Take a Hollywood starlet and get her to drive around the streets of Glasgow in a black wig and a van with eight hidden cameras inside talking to real people and asking them to climb aboard. No not a new reality programme but a new movie from Jonathan Glazer.

The film’s camera style is all ‘about witnessing’,” says  Under The Skin Director Jonathan Glazer. “The camera’s not excited. You know. This allows the alien to witness things we do and watching her reaction to those things.” If you were the DoP of this movie you might think this type of comment could limit your own vision of the movie.

As it turned out the ‘witnessing’ took the form of eight specially designed cameras hidden in a van to covertly capture conversation between the star Scarlett Johanssen and unsuspecting man she picks up. The One-cam (see the box out for more details) shot a third of the movie and had to knit cinematically with the current favourite choice of movie makers, the Arri Alexa.

Dirty Looks, the London colour grading studio specialising in Baselight grading for independent movies, carried out the finish of Under the Skin. Visual effects were completed by Dirty Looks’ creative partner, One of Us; sharing the same building made collaboration even easier to realise the director’s vision.

The difficult shoot was a mixture of Arri Alexa and the new One-cam designed and built by One Of Us, a VFX studio in London.

The film, shot in Glasgow and rural Scotland, was captured by Daniel Landin on the ARRI ALEXA and One-cam, a unique small cinema-quality digital camera, specifically developed by One of Us for covert shooting in Glasgow’s city-centre. Custom colour science was developed to enable the cameras to sit together in the edit and used in Baselight to help balance the feel of the cameras.

As visual effects developed they were regularly conformed and worked on in a 2k grading environment, allowing the look to evolve while keeping creative options open. Dirty Looks’ Tom Balkwill explained: “Combining technical resources allowed a quick turnaround between creative departments and helped us deliver what this film needed, not only quickly but to the highest standards – the efficient workflow from VFX, aided by the Baselight integration, meant quality never had to be compromised.”

From this starting point, colourist John Claude came in to set the grade. “I worked closely with Jonathan Glazer to achieve the look that felt right,” he commented. “He was very clear that it should be rooted in an everyday Glaswegian reality.

“The balance in the grade was naturalistic in the street cinematography, then more stylised as we took the viewer through some of the more curious, unsettling sequences,” he added. “The blue ‘swimmer’ sequences, when one of Scarlett’s victims is under the pit, were quite challenging, but made easier with Baselight’s matte-layer stack management.”

Tom Balkwill pointed to another key scene that represented a huge technical challenge. “In this scene Johansson’s face emerges from an accumulation of street visions – a very complicated montage made up of 93 blended 2K layers. This sequence could only be finished with Baselight, because each individual layer needed its own tweaks in stabilising and grading. You absolutely need the power of Baselight to achieve what we did for Under the Skin.”

There’s a very horrific scene on a beach, which we watch from a distance with Johanssen, rather than getting in the middle of the action. It’s shot in a deliberately non-Hollywood way, as if you just happened on this terrible event.

There was a certain style needed for this film and John Claude was especially chosen for it, John Claude “You can divide the film up in various ways in terms of how you look at it. It travels between very everyday kind of sequences some of which are almost fly-on-the-wall in feel and then it might suddenly just diverse in to a very fantastical sequence which is very VFX heavy. It might then go back in to the everyday feel again. So we tried to thread those two looks together. Jonathan’s all about trying to make people believe the imagery whether it be an everyday sequence or  VFX sequence it must be believable. Having said that he would often come into the grade with a very open mind and be very keen to discover and find the look that day in the grade. He came with very few preconceptions. Some sequences we nailed very quickly and some we grappled with, one being the blue under the pit sequence.”

A shot from the One-cam from the movie.

Traditionally when you mix true cinematic footage with either ‘found footage’ or footage from say a third inch sensor without the dynamic range, you either end up with a mismatch or you veer one way or the other. For Under The Skin having the ‘witness’ idea from the outset made the movie un-cinematic from the start. Tom Balkwill, “John’s approach to the look of the film was not a typical cinematic one. We looked at film LUTs to emulate Kodak and Fuji and so on but in the end we went away from that because what we wanted was a very much un-fettered image and actually part of the voyeuristic and uncomfortable angle on this film is, I have to be careful what I say here, is almost like a reality to the imagery and a naturalness to the imagery which would go against most people’s interpretation of a cinematic look. But at the same time it’s very beautiful.

“Where you might have the more video style footage of her driving in the van which might feel like video surveillance almost. We didn’t want it to look too dirty and broken either. That’s where the One-cam was brilliant because it was so portable and gave such a good resolution.

“It’s not just the look of the One-cam but also the angles it was getting because they built this van with eight of these cameras all over the dash board and the doors. It had all these angles covered and because of that the angles of the photography were very interesting. That was part of the style as it allowed you to watch her in different ways.”

The DoP, Director and DITs were in the back of the van recording all eight cameras on One Of Us’ own recorders. They were using colour science to reverse-engineer look up tables from the Alexa. The team were even looking to produce their own de-Bayering algorithm. The director actually preferred the look of the One-cam to the Alexa!

In the end there were custom LUTs used to tweak the Alexa and if you watch the film you can’t tell the difference when you cut between the two camera types.

John Claude, “We didn’t want it to jump. We didn’t want a jarring cut going from the one style of footage to the other. I’d like to see the One-cam used more now because I think this project was a little bit ground-breaking in that regard.

“One of the other things that runs throughout the film is her look, It’s quite distinctive with wig on and her skin tone which is often quite pale in certain light but does get rosy occasionally. Her pink coat as well. There a few visual signatures that ran throughout.

“One of the things that we spoke about which is not so uncommon these days is the fact that we were grading without the film print LUT as your target emulation, so were basically grading in P3 and it did allow us to hit a colour palette that would have been different if it was a more typical film cinematic approach. These very vibrant reds and pinks were partly as a result of that. There are some moments where those primary colours really ping for narrative reasons.

One Of Us is mostly a VFX house in Central London but they do have an R&D side to them that has lately specialised in small cameras. The One-cam is one of theirs which shot about a third of Under The Skin. Tom Debenham of the studio explains how they got involved, “We knew the Director Jonathan from work we had done previously, the London Olympics and some advertising with VW – it was called ‘Tango’. They had also done a commercial with 55 RED cameras for Nike.

“His brief for the movie was to build a camera that needed to be quite high resolution to match the Alexa, so we looked around but couldn’t find anything to suit. So we started to build a system from scratch that would do the job but we only had three months to finalise it! Me and Louis Mustill drew up a short list of image sensors that we thought might  fit the bill and figured what we would need to record them, the idea being that the camera heads would be separate from the recorders so they could be hidden in very small spaces.

“There were eight cameras in the van and we spent quite a while pre-visualising where they had to go. So eight cameras all recording nearly 2.5k resolution uncompressed RAW images simultaneously.

“Once we identified a sensor and got in touch with manufacturers of camera bodies that would fit the sensor, it was a matter of deciding what signal processing and filters we would use. What comes out of an industrial type of cameras is a very RAW image you have to treat. It’s completely unbalanced, uncalibrated sensor data. You have to build a whole back-end to get any usable footage out of it.

“We tested the One-cam and the Alexa side-by-side to make sure we could keep up with it. In fact it ended up being slightly the other way around. In the grade the One-cam sort of set the look. They thought the camera had a kind of ‘honesty’ about it that they liked, to them it looked more like film.

“The lenses were mostly C-mount  and again we sourced them from wherever we could. We had to check that they didn’t vignette and were sharp enough and of course cover the format and mechanical were sound. We also engineered out own PL Mount adapter so for the Super 16 sized sensor were able to use Super 16 PL lenses which tended to work better for wide shots where we need pristine quality.

“The sensor was originally a Kodak sensor, it’s now from a company called Truesense. They are CCD sensors and behave quite differently in the way they react to light. They have a native global shutter, no rolling shutters and they have a very different response to light in the shadows in particular. It’s very interesting as a low light camera – but they are not suppose to be used in the way we used them.

“We did a lot of work in developing LUTs and processing and calibration to make sure that we got absolutely every once of range out of the cameras.”

The cameras are under further development and have been used on the London Olympics and for the movie Les Miserables as well as specialised use with Double Negative for body capture. It will be available for rent once they have more devlopment time. 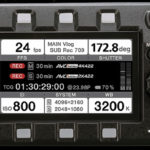 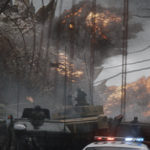