MPC, the Moving Picture Company, continued their great year with some superb monster FX which referenced the ‘main in a suit’ original.

How do you reference the original ‘man in a suit’ style Godzilla film with its innate ‘monster emotion’ and at the same time bring the classic up to date. Yes you use modern technology but don’t forget the bears.

As word of mouth splits the vote on whether the new Godzilla movie has been made by a VFX master or by a director who isn’t good with actors, we have some background on some of those superb FX.

Translating Godzilla from concept artwork to a photo-real living creature took MPC’s artists several months, working up each part of his body — from the underlying bones, fat and muscle structure to the thickness and texture of his scales. With the close-up nature of the camera work and the sheer scale of the asset, a tremendous amount of detail had to be painted and sculpted to ensure Godzilla came vibrantly to life on screen.

With respect for the Toho Co. Ltd.’s original ‘man in a suit’ version, Godzilla was animated as a fluid living and breathing creature with the addition of humanistic elements to capture his attitude and personality.

MPC’s artists used a mixture of body language and carefully designed facial expressions, which allowed them to translate emotions and expressions on screen, without breaking the believability of the creature.   MPC’s animation team used a variety of references, including the movement of bears and reptiles, as a basis for the keyframe animation that gave Godzilla movement.

For the climatic 3rd act of the film, the team created a digital version of downtown San Francisco, giving the filmmakers complete control over the large scale virtual cinematography, in order to fully realise director Gareth Edwards’s visual story telling.

The various destruction effects for the complex creature battle sequence were used as an element to remind the viewer of the scale of the monsters in addition to showing a spectacle.    A tremendous amount of detail had to be simulated to convey the 350ft height of Godzilla, involving some extremely high-resolution simulations of buildings collapsing and swirling interactive dust.

MPC’s in-house destruction simulation tool Kali was upgraded and given a number of significant incremental improvements to make photo-real destruction. The MPC software team added new tools to Kali for tetmesh creation and post-processing as well as giving it performance improvements, to allow faster simulation and rendering. 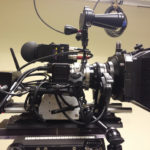 Loving The Alien. The Shooting Of 'Under The Skin' 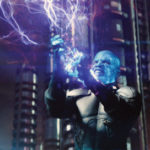