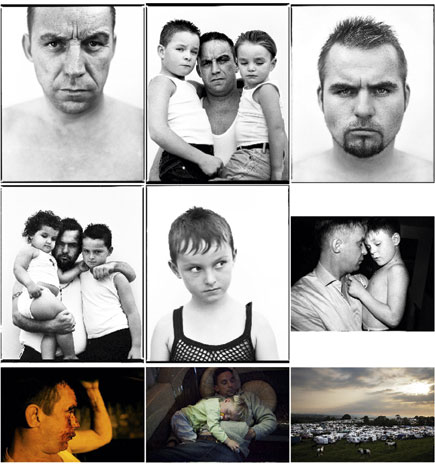 It’s In The Blood

Documentary maker and stills photographer Leo Maguire spent many months gaining the trust of a group of travellers in order to make a reality show for broadcast. His Canon 5D MkII wasn’t ever going to be used for such a task so he started looking for a replacement which he found in a new camera from Sony, the NEX FS100E.

True Stories: Gypsy Blood aired on British Television earlier this month to a Twitter storm mainly as a result of its depiction of Traveller’s kids. Scenes of under tens smashing several bells out of each other didn’t sit well with the Twitterati but then they had missed the point.

Director, documentary maker, stills photographer and now videographer Leo Maguire’s achievement was to be there in the first place shooting the kids. The documentary was the culmination of a more than gentle persuasion to let him film, in fact less than that, he had started one frame at a time with his Canon 5D Mark II stills camera. He went from stills to recording video with the same camera which was enough to win himself a commission for a full programme.

The problems really started once he had the green light, one of them was using the Canon stills camera in a documentary way. With it’s limitation of time or space recordings (after 12 minutes or 4GB it stops recording) using it was a non starter but Leo needed something that was as portable and as ‘invisible’ to his subjects along with the depth of field effects which everyone uses the 5D for.

Leo’s rig with the NanoFlash and voltage converter on the side to enable the use of the recorder.

Leo also managed to record any off-speed footage to the camera’s internal cards even though the data rate isn’t high enough for most broadcasters.Enter Hammerhead TV and a new acquisition by them called the Sony FS100E.

Nigel Kemp from Hammerhead explains the situation, “Leo was capturing clips on his 5D camera, the broadcaster wouldn’t accept the programme being shot on the camera and the clips lengths just wouldn’t work for documentaries. They came to us looking for other options. They wanted a camera that was relatively discreet, he didn’t want a shoulder mounted camera, it just wouldn’t work. There was also a budget restriction as well given the longevity of the shoot which was about three months, a rental of say a F800 would’ve blown the budget within one week.

“Leo wanted the depth of field he was used to with the 5D and he also wanted to cut some of the 5D footage in to the finished programme.

“First camera that we potentially looked at was the Canon XF305. That would have pleased the broadcasters with its 50Mb/s but Leo found when he tried it that it just didn’t recreate the effects he was getting with the 5D.

“At this point the Sony NEX camera was being launched, we had a look at it and felt that it would work quite well for him. At that point we bought one and started looking at the lens choice. The one that Leo felt gave him the most versatility was the standard Sony zoom lens, in addition to that he had a pancake lens to use as a super wide. There was also an adapter to allow him to put on some of his own Canon glass. But predominately the camera was being used with the Sony lens. He also used a variable ND filter permanently fixed to the lens which gave him additional iris control whilst live on the shot.

“It’s a relatively small unit but we did have a power problem with it and the camera. If Leo went off-speed he recorded that straight to the camera.

“The camera is 7.2V but the NanoFlash really needs the 12V so we actually inverted the voltage in to the camera using an adapter on the side of it. It worked but was a little ungainly.

“Leo needed to be able to hold the whole rig in his hands more like a stills camera. Leo is a tall chap holding a camera at chest height is always going to still deliver a pretty good angle.

“The physical size of the camera we felt was quite different from the rest. Leo ended up using a camera bag which was strapped around his neck as a stabiliser and to put the camera in.

“He was never going to use a tripod so we suggested using a monopod screwed in to the base of the camera. In the end that wasn’t used either. He ended up using the bag around his neck.”

The documentary was intercut with some of his original 5D footage which worked quite well but a trained eye could see the difference. The new Sony camera certainly could work as a Canon 5D or 7D replacement for reality shows and Hammerhead has proved that a NanoFlash or similar recorder doesn’t mean that you have to lug something huge around with you to attain the magic 50Mb/s. 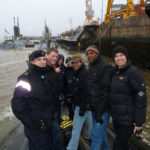 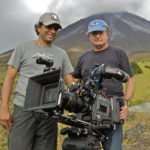