Mytherapy has just delivered digital workflow solution for the independent feature Blackwood produced by Adam Morane-Griffiths, directed by Adam Wimpenny and shot by one of their favourites Director of Photography, Dale McCready.

The film was shot entirely on Red Epic using anamorphic lenses and during the early stages of testing, they established a specific look for the film that emulates Kodak film stock, but also embraces the full bouquet of the anamorphic lenses.

One of the biggest challenges that independent productions shooting digitally face today is managing the cost of the digital workflow while maintaining maximum quality. “Having worked with many indies over the years, we are used to dealing with limited budgets and have become quite accustomed in finding creative ways of delivering the highest quality images within the given budgets.” Commented Dado Valentic from My Therapy.

“For Blackwood the solution was quite radical, we decided to cut the cost by not having a DIT onset. In many ways, in this day and age, this makes sense. Digital cameras are much more reliable than they were a few years ago and the cost of memory cards has gone down while reliability is greater than ever. Therefore, having a DIT with equipment on set to check the media and backup the data is becoming less necessary.

“Effectively what we have done is to replicate the 35mm film workflow. All memory cards were delivered at the end of the day to our lab. There, in a controlled and colour managed environment, we were able to process the images in the shortest possible time, but with much higher fidelity and image control than we would be able to have done onset. Moreover, our lab systems are capable of processing multiple streams of 4K sequences in 60 frames per second and with fast fibre optic Internet, we are able to send dallies anywhere in the world literally within hours from the rushes being delivered to us. All of that at a third of the cost of onset DIT setup.

“Are we trying to say that there is no need for a DIT to be onset anymore? No, for many productions it still makes more sense to stick to the onset DIT workflow for simple logistical reasons. But, for productions shooting in and around London, a DIT-free set, where rushes are processed in a lab, has become more than viable alternative offering better images at lower cost. So while Blackwood was the first production we worked on that adopted this workflow, the great result and experience we gained from it makes us believe that in the future many more productions will opt for this route.” 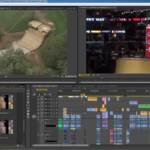