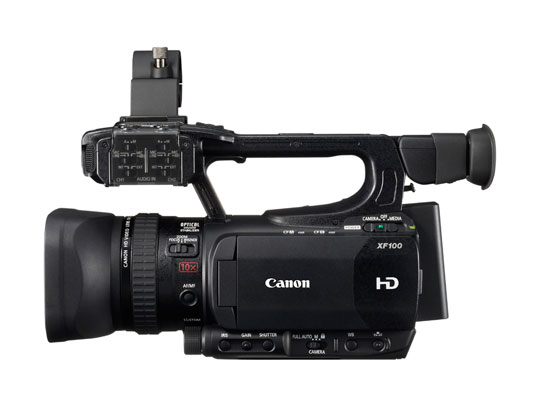 The new Canon XF100 camcorderCanon today expanded its XF series of professional camcorders with the launch of the XF105 and XF100 – their smallest models ever to include the broadcast-quality MPEG-2 Full HD recording codec (50Mbps, 4:2:2).

Like the XF300-series, the XF105 and XF100 record MPEG-2 Full HD video in industry-standard, open-source MXF (Material eXchange Format) files to Compact Flash (CF) memory cards at transfer rates of up to 50Mbps, with 4:2:2 colour sampling.

Both models offer Relay Recording and new Double Slot Recording – a feature that allows users to record the same footage to two separate CF cards simultaneously. Additionally, during recording a card not in use can be exchanged or initialised.

Both models feature a new 10x zoom, 30.4mm wide-angle Canon HD Video Lens, with fast aperture performance up to f/1.8. A three-level digital tele-converter function can also be used to extend the lens’ focal length by 1.5x, 3x or 6x – enabling users to get closer to the action if required.

Like the larger XF300-series models, XF105 and XF100 offers 1080/50i, 1080/25p, 720/50p and 720/25p modes, and different recording bitrates to complement existing workflows. Fast and Slow Motion, Interval Recording (time lapse) and Frame Recording (for stop-motion animation) are all possible, as is a 3-second Pre Record, or cache, option.

The XF100-series provides even more choices in the shape of new Infrared and 3D Shooting Assist functions. Infrared (IR) shooting mode can be activated using a switch on the front of the camcorder, beneath the lens. With a built-in IR lamp and both green and white light shooting options available, XF105 and XF100 can capture genuinely dramatic night-time footage – perfect for assignments like wildlife or documentary shooting.

A manual lens ring provides control over focus, zoom and iris, and a side-mounted switch allows the user to switch instantly between each mode. A number of settings, including iris control, can also be adjusted using a custom key /control dial combination.

Users can configure more than 90 individual, image-related variables using the

Custom Picture function; including selecting one of six preset gamma curves. Operators can also assign one of 34 individual functions to 10 customisable buttons, allowing them to optimise the camcorder for their personal shooting preferences or stylistic considerations.

Up to 9 ‘customised pictures’ can be stored to each body, with CINE.V and CINE.F gamma settings among three presets supplied as standard. Preferred settings can be saved and transferred from one camcorder to another via SDHC cards – particularly useful for maintaining a creative style across camcorder bodies, or for organisations that may want to ensure uniform set-up across multiple camcorder units.

Each camera’s high-quality images are complemented by professional-quality audio capture. Independent audio can be recorded by connecting external microphones to the two XLR inputs, while a front-mounted integrated microphone captures stereo sound. Both models are capable of recording 16-bit linear PCM audio at 48 kHz, providing sound quality fit for professional or broadcast use. 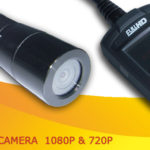 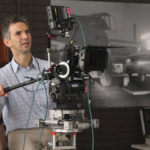 Speed, reliability and robustness with S...

DOP Andrew Boulter needed a solution to a high-data transfer in Saudi Arabia or...