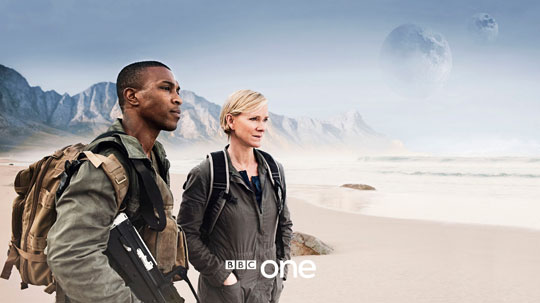 BBC’s Outcasts Get Anamorphic Shooting But Not Broadcast

The BBC’s Outcasts is currently screening on BBC HD and was shot in ScopeOutcasts is something of a milestone for television drama. We think it’s the first time anamorphic lenses have been used for television and by achieving this Outcasts takes the quality of TV drama a little bit nearer to the movies.

Cinematographer on Outcasts was Adam Suschitzky who is appearing quite a bit in this issue of HD Magazine, that’s what happens when you do interesting work. He commented on the programme, “This is TV drama on quite an exciting scale, we built huge sets down in South Africa and shot on quite old anamorphic lenses so it has a very distinctive look. It was also the first TV production to shoot M-Scope.

“The history of the shoot was that Bharat Nalluri  the director and I go back quite a way. We kind of piloted Life On Mars, Hustle, he had started Spooks before that. He and I are always trying to push the envelope I suppose and right from the start we considered that the show, Outcasts, should be anamorphic.

“It’s got a classic sort of seventies Sci-Fi feel about it and although the BBC haven’t broadcast anything in 2.40 letterbox we would get the benefit of that look even if we had to crop it for 16:9, which is what we ended up doing.”

To take on the might of the BBC technical department with an aspect ratio that is an anathema to television there must have been a good reason to go that way. “You get these amazing flares, horizontal flares that you can’t get from Spherical lenses. With the older anamorphics, which are the ones that we really loved, you get an amazing fall off around the lens. The wider open you are in the aperture the less sharpness you have around the edges. So there’s this beautiful organic quality.

“He and I knew that this show was going to have to be a digital show and we would embraced that and then thought about how we would have to in a sense ‘de-digitise’ it to bring back the organic qualities that those seventies shows enjoyed. These old lenses from 10 or 20 years ago have remained intact and looked after lovingly by these rental houses. So we did an enormous amount of tests to get to that stage, we not only compared formats against the RED but we looked at eight sets of lenses to get to the ones we really wanted.

“We initially tested some lenses that Tarkovsky had used on Solaris in 1972 called Lomos. We absolutely loved these lenses which gave the most incredibly flare I’d ever seen. For a good while we thought that this was the way to go but it transpired that these lenses were very hard to come by. Very few sets exist in the world, so I felt in the end a very tough TV drama schedule in very difficult terrain would be quite difficult to pull off with delicate lenses like that.

“In the end we found a very viable alternative in the old Hawke anamorphics. Unfortunately Arri had to get them back from all parts of the globe so we could use them so we were very lucky to get hold of them.”

Arri has patented their Mscope process and their D21 is the only digital camera that allows full use of anamorphic lenses through a 4:3 sensor which captures the whole image projected by anamorphic lenses.

“The clever part is where they take the 4:3 sensor and produce this anamorphic image. It’s quite a complex process and requires two channels to be recorded and so two SRW recorders and then the image has to be re-combined in post production to give you dual stream. You can play off one channel and it looks fantastic but it was thought that the VFX would benefit from the dual stream.

DoP Adam Suschitzky with one of his Hawke anamorphic lenses“So it’s quite a technical process going on in the background but the actual results will blow you away. The BBC technical department only had an issue with the aspect ratio, the quality of the programme they passed. What wasn’t passed was the broadcast of 2.40 sadly, but in fact now that they’ve seen the finished thing they have agreed to transmit all the upcoming trailers in 2.40 so at the end of each episode they will be next week’s episode in fantastic 2.40!

“So it is quite a coup, I think that will be the first broadcast on TV.”

As Adam puts it, it’s Sci-Fi meets Western. A group of pioneers thrust in to a hostile environment. They create a new society based on being peaceful and harmonious but it doesn’t last long. “So you have a visual treat – on one hand you have the Sci-Fi back drop set 60 years in the future with space ships and on the other you have this magnificent opportunity with the landscape which plays a big part in the storytelling – so I was thrilled to combine two of my favourite genres.

“The director Bharat Nalluri felt very strongly that the Sci-Fi aspect to the programme should be played down. These are not laser gun, light sabre types stories. They are character pieces with large vistas. We wanted to reflect those old Sci-Fi movies but not wallow in them. The recent Star Trek film directed by JJ Abrams was often mentioned although that’s very Sci-Fi. We discussed that more to do with the use of flare. Star Trek is full of magnificent flare and also had this very organic old school Sci-Fi look and it was that aspect of it we embraced, the rest of it is very action packed and ours is more of a character/landscape piece.”

Adam has shot a great deal with the Arri D21 but he did have some reservations using it on this trip to South Africa.

“Heading in to South African light and shooting in deserts, mountains, alleys you name it made me slightly nervous. Nervous about the electronics, with the sensor and how it was going to handle these vast extremes of contrast. But I have to say that the camera just met the challenge head on and even when I was grading the programme while I was shooting Upstairs Downstairs on the Alexa I was blown away with it.

“It’s a different look and may have a slightly reduced dynamic range than the Alexa but actually I began to view it rather like a film stock. In fact it’s not going to go out of date, it’s a classic and carries a contemporary classic look. Combined with these lenses it’s just unique.

“It’s definitely got it’s own look, Bharat kept saying it looks like Super 35mm and he couldn’t wait to see it projected at BAFTA! To be fair it’s definitely more filmic than any HD that I’ve seen and it’s got a beauty of it’s own.

“I think today with HD formats it’s more and more about the glass you put in front that defines the character of what you’re going to get.

“With this shallow depth of field and lower contrast, more flare and beautiful roll-off in to the edges it really did have a special look.

“I saw it projected at MPC at a special screening for journalists last week, I hadn’t seen for a few months and it just looked magnificent.

“We compared it against the RED right up front. I’ve seen great results on RED but hadn’t used it. The D21 definitely came out with a better tonal dynamic range.”

The experience of shooting Outcasts has made Adam a true fan of the production company Kudos, “They are just one of the best companies you can work with because once they embrace an idea they support it wholeheartedly. You can’t achieve something so unique without such support. So it was great to do such thorough tests.”

Adam also achieved a lighting technique that hadn’t been used before on Outcasts, “The central set is basically made from the first space ship to land from Earth and becomes the central comms area.

“I wanted to give this command centre a life of it’s own, an artificial intelligence if you like. So I designed these moving lights, again in a very organic style to fit with that notion. In South Africa thanks to an amazing grip department who had worked on District 9, I designed this enormous network of ropes and pulleys with lamps rising and falling by hand with teams of men around the set.

“The effect was quite ‘film noire’ in execution. The production designer, Edward Thomas, and I put these louvered shutters in to these circular corridors and behind the louvers I put these moving lights. We did it very slowly so you’re not quite aware of what’s happening but it gives the impression of breathing or that the space ship has a heartbeat – quite a unique result.” 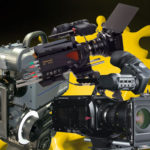 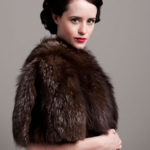