Gunda is an astonishing documentary, employing careful filmmaking techniques to offer an intimate look at the lives of a sow and her piglets

When Joaquin Phoenix used his 2020 Oscar win as an opportunity for a heartfelt plea in favour of animal rights, many were mystified. It was certainly the most impassioned acceptance speech about stealing milk intended for young cows ever heard amongst all the glitz and glamour. Nonetheless, its poignancy caught the attention of art house Russian filmmaker Victor Kossakovsky, who asked Phoenix to be executive producer on his new passion project, Gunda. It’s not hard to envision how his words would’ve manifested into this narrative-free documentary about the life of the eponymous pig and her piglets. Even though it’s a simple story, there’s an emotive arc of motherhood and photographic stillness, aided by DOP Egil Håskjold Larsen’s attentive camerawork.

A tremendous amount of care went into capturing the personality and intellect of the animals – as evidenced by the sharply textured, high-contrast black-and-white farms, that was given the monochrome treatment to encourage viewers to rethink their perception of pigs. “Without any colour, that postcard image of the pink pig, green grass and blue sky disappears and brings to life a new character – one which doesn’t have so many pre-existing connotations. It takes away the sensation that Gunda is anything less than individual,” explains Larsen.

The decision to shoot Gunda in black and white happened by chance during prep. Larsen was testing camera angles on his Leica M Monochrome when he noticed details, such as the grooves of Gunda’s eyelids and textures of her skin, that weren’t visible in the colour photographs. “These weren’t apparent because we were too concerned with looking for colour repetition in the images,” he says. “But making the switch wasn’t an easy one, because every photographer knows the best photos have an underlying sense of purpose – a hint that the images were deliberately captured in a particular way. So, we tuned the monitors to black and white to make sure all the shots were composed as such.” 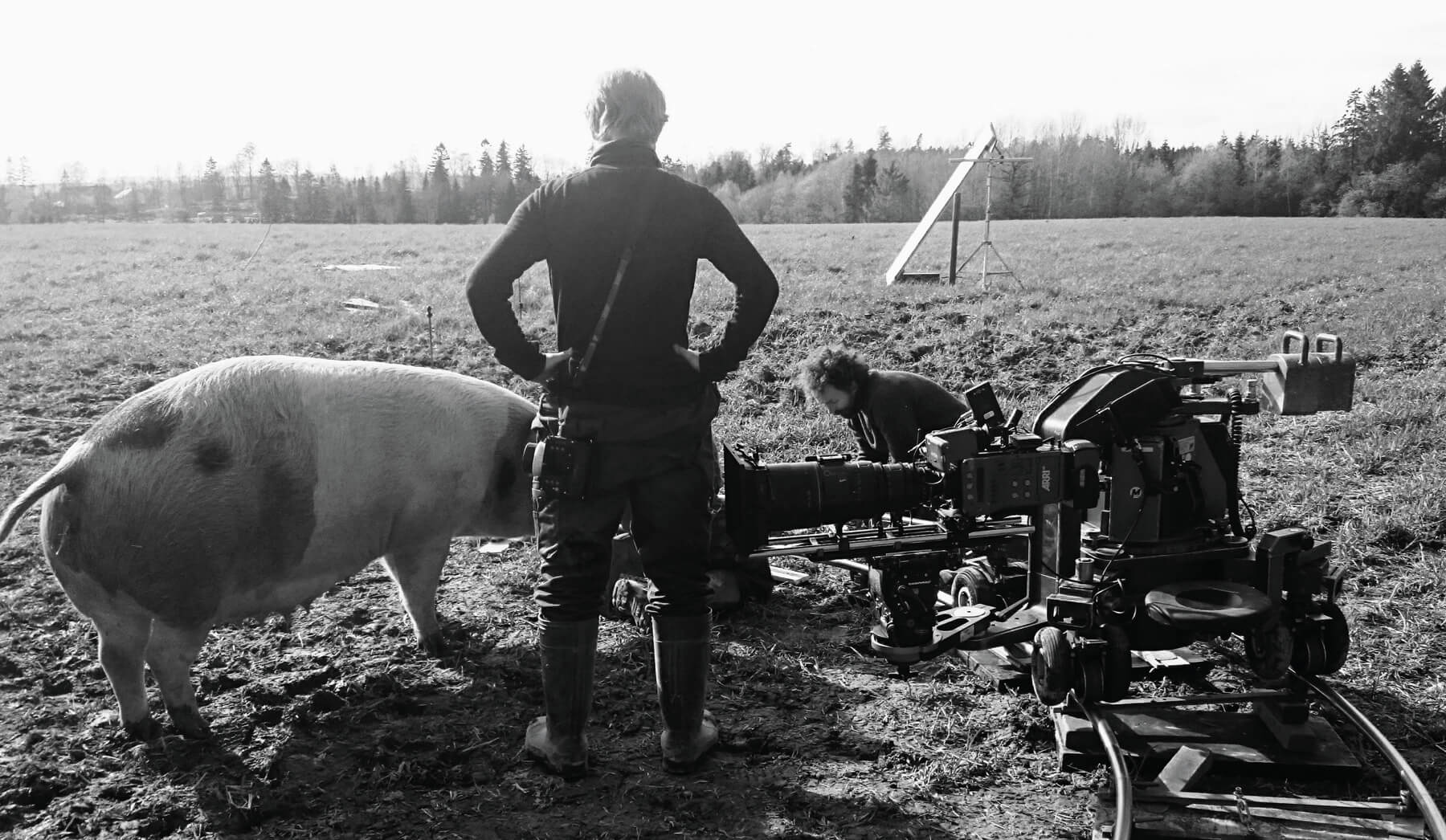 Although Kossakovsky is vegetarian, and has been since he was a child, Gunda wasn’t borne from activism. There’s no music, on-screen text or Attenborough-esque dialogue telling you how to better your life. Instead, it provides a holistic view of animals historically reared for meat, and denouncing it as anti-meat propaganda would be to misinterpret the poetic delicacy of its style. Larsen says, “Kossakovsky’s approach isn’t to lecture, but to visually represent something using the tools of cinema. He’s forcing the viewer to see things from a different perspective, while still enabling them to interpret it in their own way. For me, that’s what got me into making documentaries.

“However, the genre has suffered in recent years. It’s become less about the art and visual representation of the world we live in, and more about the journalism. It’s an important and huge topic, but is difficult to speak about in specific terms. Either we need to call what we’re creating by a different name, or normalise work that is more than just rhetoric.”

Gunda doesn’t have a happy ending, but leaves you with an important connection to the animals, just as you would experience after watching a documentary about the lives of human beings. “After getting to know these animals, I understood they each had a personality, and a special way of treating each other. Gunda is a really caring and beautiful mother. If you manage to see some of that in the film, you realise how important it is to respect these animals – and also how insane it is that we do whatever we want to them, just because it’s beneficial to us as a species,” says Larsen. 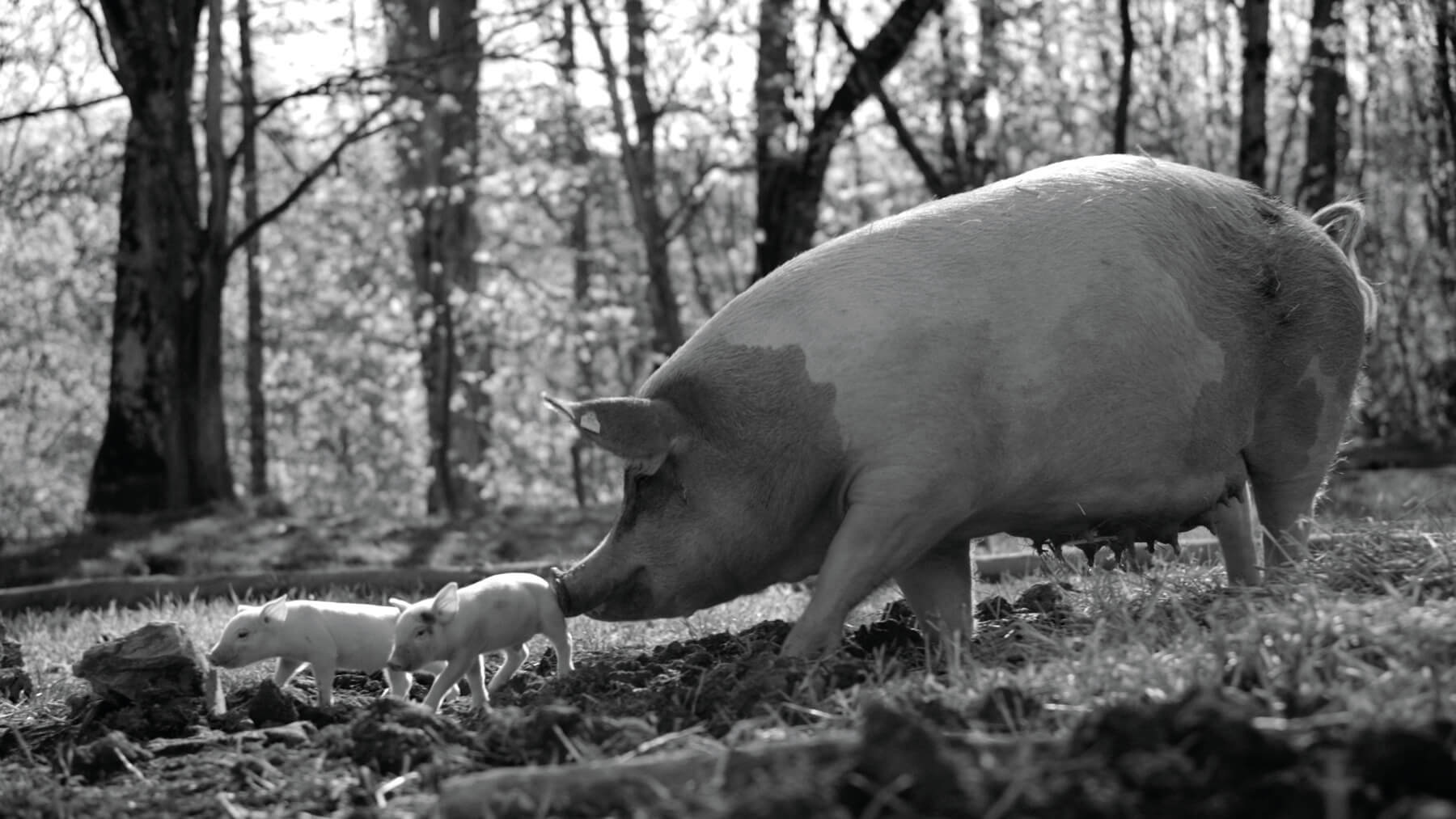 Like any new mother, Gunda is exhausted and exasperated as she weathers the burden of child-rearing. Her drab routine, however, is made oddly mesmeric once we witness her dote on her increasingly playful and hungry brood. To show this on camera, the crew implied tactile naturalism by ingeniously constructing a camera-equipped replica of her enclosure.

Larsen explains: “We laid dolly track around her barn, which had modulated walls, so we could carefully track and crane the Arri Alexa Mini LF [paired with an Angénieux Optimo Style 25-250] from the outside looking in. It was a huge physical job, because we were always digging dolly track into the ground, so the camera was at the right height for the animals.” 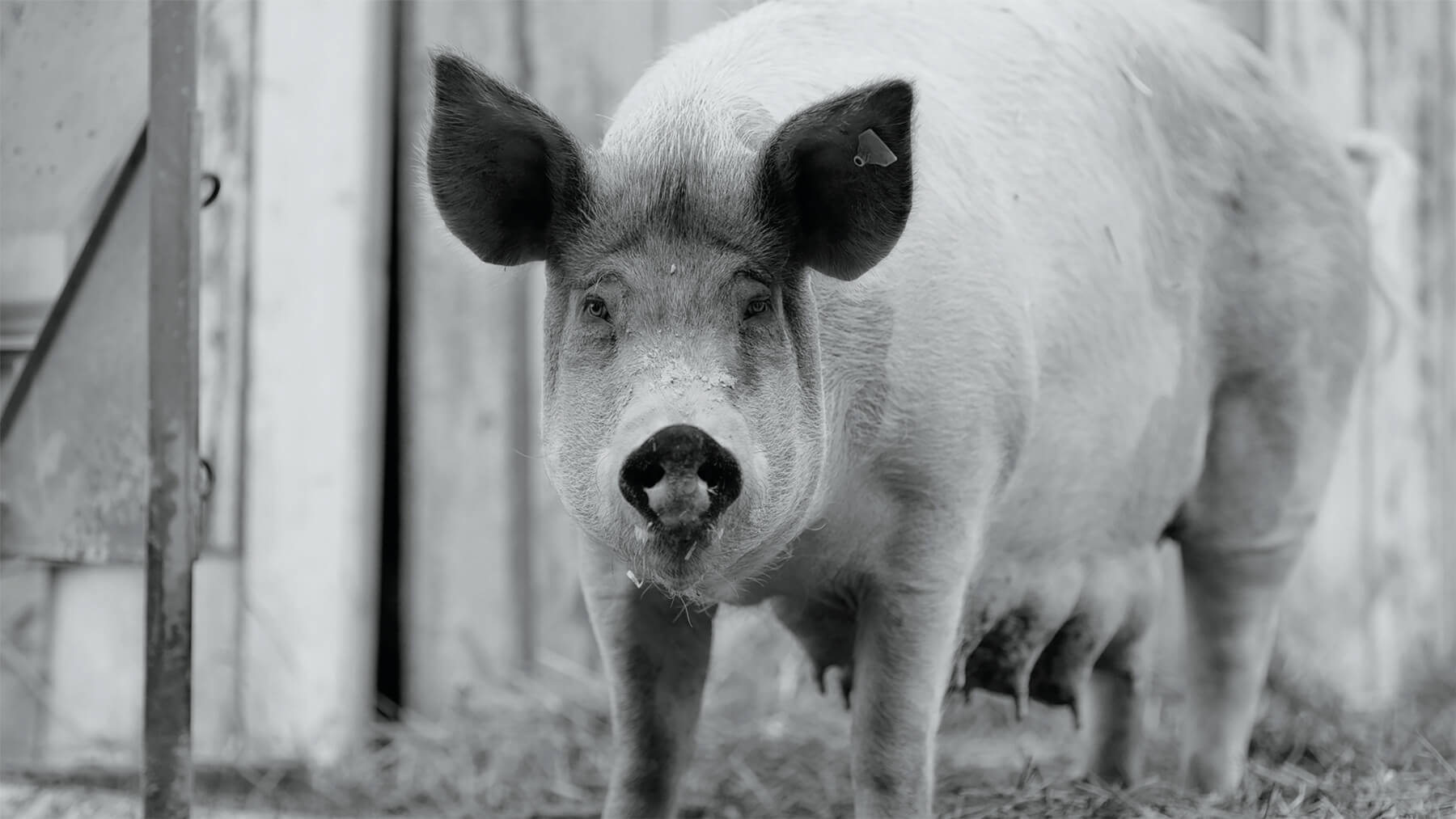 While this observational approach gave them the distance to gain the respect of the animals, it was also crucial in the development of ‘character’ arcs throughout the film. As the pigs became more accustomed to the crew’s presence, they were filmed at a closer range, to enable viewers to get more familiar with them and gain deeper understanding of their ‘characters’.

“They became more comfortable with us walking amongst them, so most of the second half of the film was done on a Steadicam, using either a 14mm or 32mm Arri Master Prime lens. The camera equipment took quite a beating here, being chewed and butted by pigs, but it didn’t matter. The most important aspect of creating this film was the distance and closeness we were able to dovetail,” explains Larsen.

The movie boasts plenty of long shots, held just tightly enough for you to admire the details and compositional symmetry of each frame. “We worked so hard to maintain the shots as long as possible,” says Larsen. “The ending is almost 14 minutes long, which is quite rare for a documentary. But it’s also interesting, because it immerses the viewer in that environment. The task is to ensure the footage is compelling, using dynamic camera movements to enhance the feeling that you, as a viewer, are spending time on the farm.”

After 93 minutes in pig heaven, we can confirm that Larsen and his team passed with flying colours. 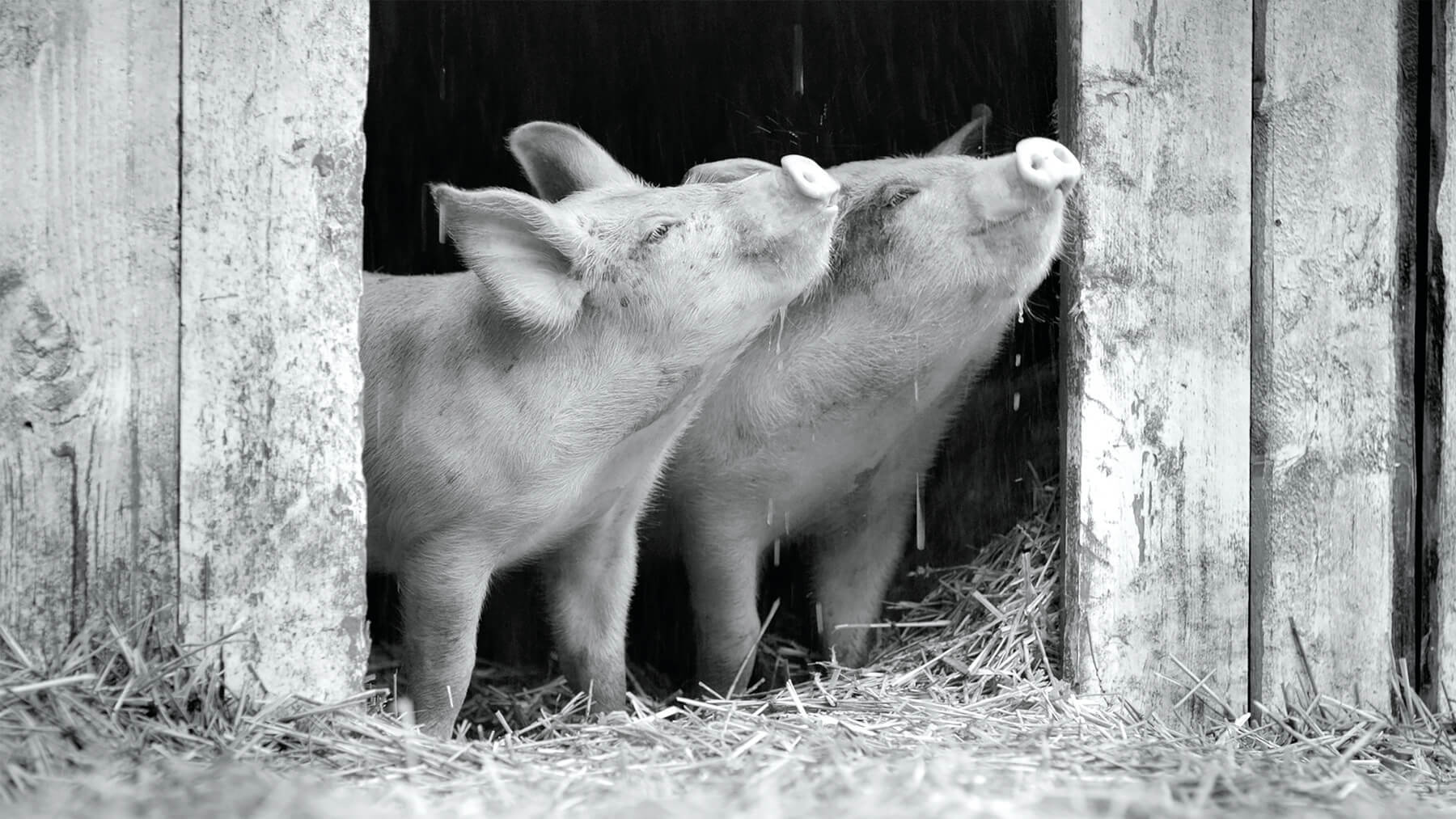 Originally featured in the May 2021 issue of Definition magazine. 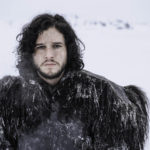 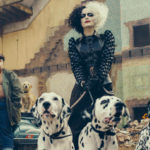 Formatt-Hitech has been a leading manufacturer of motion picture and photography filters since it...

Litvinenko recounts the brutal murder of the former Russian intelligence officer, assassinated in 2006