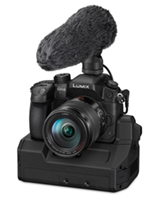 The YAGHE attaches (rather awkwardly) to the GH-4’s tripod bush.

Few would argue with the fact that video enabled DSLRs have had a massive influence on film-makers and equipment manufacturers. Even Canon admit that the C100/300/500 range was a response to the success of their own EOS 5D MkII – a hugely successful attempt to make a ‘proper’ movie camera that incorporates the best characteristics of that DSLR, without most of the drawbacks.

Now Panasonic have thrown down a gauntlet to the 4k world with the release of the GH4 DSLR. Here is a small, light and comparatively cheap stills camera that is capable of recording 4k moving images with a sophisticated, high bit-rate CODEC. To further add to its appeal, they have made available the DMW-YAGHE (how do you pronounce that?) – an ugly but functional add-on that provides two proper XLR audio inputs (with phantom power, meters and level controls), quad SDI output, timecode input and full sized, 4k, 10-bit HDMI. The YAGHE attaches (rather awkwardly) to the GH4’s tripod bush – you have to pull a couple of rubber covers off the connectors on the bottom of the camera (the covers will instantly get lost), screw on the YAGHE and then slide a connector into the HDMI port on the camera’s side. The YAGHE must be powered from a conventional 4 pin XLR – though this will then power the camera as well.

The GH4 is a Micro Four Thirds (MFT) standard camera, with a 16 Mpixel (stills) sensor which is windowed when recording 4k video – in other words its uses only the centre 4096 (or 3840) by 2160 pixels. This helps eliminate the moiré that is usually associated with DSLRs recording video and results in a sensor area slightly larger than Super 16mm. As the flange to focal plane distance is so small, the MTF lens mount is well served with adapters – from PL, Leica and Canon formats to C mounts for Super 16 lenses – and the camera’s software allows you to shoot even when the body can’t electronically detect the presence of a lens.

Setting frame size and rate is one part of the user interface that drive me nuts. First you must set the system frequency in the setup menu (to 24, 50 or 59.94). Then you turn the camera off and on again. You can then select the record quality in the motion picture menu, which sets the frame size and rate – so, for instance 24 fps requires the system frequency to be set to 24 Hz (unsurprisingly) and 23.976 fps requires a system frequency of 59.94 Hz. The 4k frame sizes are only available when the top-plate mode selector dial is set to manual motion picture, though 1080p recording is possible in any of the stills modes (and there is a dedicated video record button handily under your right thumb on the rear of the camera).

The GH4 – a small, light and comparatively cheap stills camera that is capable of recording 4k moving images with a sophisticated, high bit-rate CODEC.

This, however, is my only major niggle with the user interface. The GH4 is a complex camera, with multiple metering and autofocus modes, so the menu structure is correspondingly complex. However, with the exception of a few TLAs (Three Letter Acronyms) that I had to look up in the manual, the menus are clear and well laid out – you just have to look through a lot of stuff to find the option you need. There is a standard ‘click wheel’ control on the rear of the camera, plus the LCD is a responsive and clear touch screen – either method can be used for all functions. There are also plenty of dedicated and programmable buttons scattered around the camera – though no depth of field preview, which is a bit odd on what is a fairly high-end camera.

There are more dedicated movie functions than you would expect on a DSLR. There are two zebras that can be enabled, each with variable trigger levels, and manual focus is aided both by a viewfinder zoom and coloured peaking. The autofocus (with lenses that support it) is fast and accurate in decent light. You can touch the LCD to tell the camera which part of the image to focus on, though this is only really successful with the excellent single point, variable size focus zone. There’s some focus breathing in autofocus though, so I would stick with manual. It’s possible to adjust iris, shutter angle and ISO silently, using the touch screen and, yes, you can get a shutter angle display rather than shutter speed. There are a couple of cine-like picture modes (Cine D and Cine V) which give a ‘nicer’ tonality to the captured image – Cine D is best if you are going to do a decent grade – you get much better shadow details and a tiny bit in the highlights.

In common with other MFT DSLRs, the eye level viewfinder is electronic. It has variable diopter adjustment and can be engaged manually, or automatically when you put your eye to it. You need to get it close to your eye to be able to see the whole image, and there’s some distortion and blurring at the corners if your eye isn’t dead centre, but at 2359k dots it’s nice to look at and, combined with that zoom function, easy to hit focus. There is a micro HDMI connector on the camera body, so even if you aren’t using the YAGHE you could rig up an external EVF.

The LCD is lower resolution, at 1036k dots, and it articulates for low and high angle shots, or for selfies! The camera’s body is a surprisingly sturdy magnesium alloy with a reasonable level of weather and dust proofing – though this will depend on the lens you have fitted. I say surprisingly because the body weighs only 560g with a card and battery.

You might expect the comparatively small pixel size of the windowed sensor to result in some image noise but, whilst the GH4 is never going to be a low-light king (like the Canon 5D Mk III), noise at sensible ISOs isn’t obtrusive. Aggressive in-camera noise reduction kicks in at ISO 3200 but I would be reluctant to use the camera at anything above ISO 800 if possible.

The GH4 costs about £1300 (body only) and they are doing a bundle with YAGHE for £2500. That’s pretty expensive for a stills camera of this class.

Panasonic claim to have improved rolling shutter issues – the GH4 came in at around 2.3º per picture width per second, which is OK but not outstanding. There are a lot of pixels to read out, of course, so whilst this figure isn’t as good as many HD DSLRs (including the GH4’s predecessor, the GH3) it’s better than you might expect.

The camera has an optical anti-aliasing filter so, combined with the windowed sensor approach to video, moiré is much better controlled than any other DSLR that we have tested. There is a nice balance between this control and resolution – MTF 50, with the kit 14-140mm, f/3.5 – f/5.6 lens was 0.302 c/p – so you are likely to see some, but not a great, improvement with better glass.

All that technical nonsense aside, the GH4 simply makes nice pictures. Even with the default, rather aggressive in-camera sharpening turned down (it’s better to add it back in the grade, if necessary), images are sharp, but tonally rich and with good colour. I’ve concentrated here on the camera’s 4k abilities, and it’s perhaps unsurprising that it’s better to shoot in 4k and down convert to HD than shoot in HD – unless you need the increased frame rate, of course.

The GH4 costs about £1300 (body only) and they are doing a bundle with YAGHE for £2500. That’s pretty expensive for a stills camera of this class, but it’s very cheap for a 4k camera that can produce such excellent footage. When cheap, HD capable DSLRs first appeared on the market, they were ridiculed by many, but they quickly found their way into TV and film productions at all levels. The GH4 still has some of the limitations that are unavoidable in a DSLR, but Panasonic have done a good job of adding some serious camera features (zebras etc.), so I would be surprised if the GH4 doesn’t appear in the kit bag of equally serious film-makers. 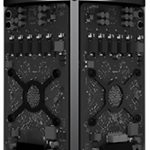 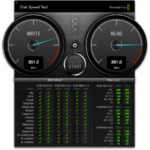