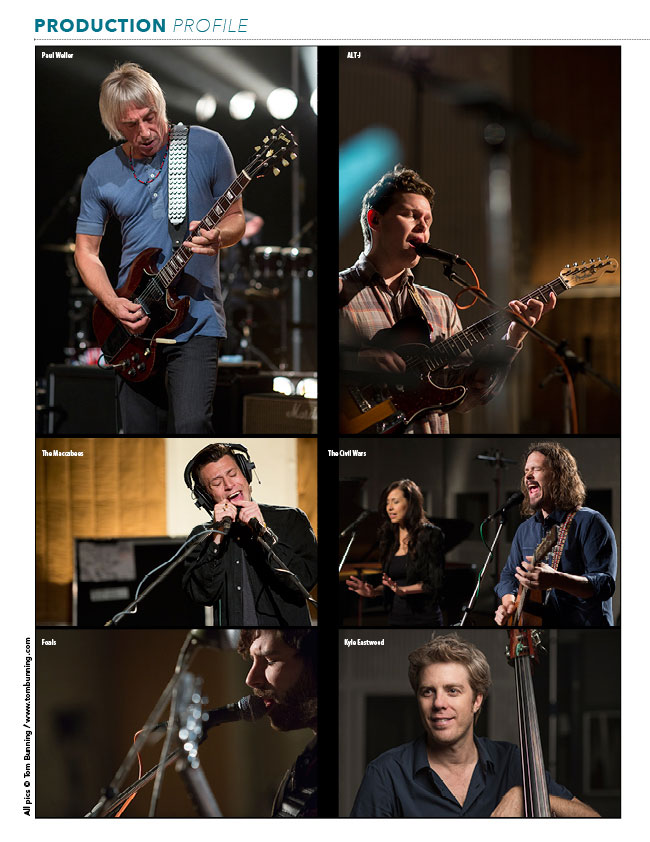 Some of the acts who have been through the new production process at Abbey Road.

Channel 4 programme Abbey Road Studios: In Session has survived the cull of  music programming in television by cutting costs, changing and improving production values and still appealing to the thinking man’s music taste. We re-visit the newly toned production on a session day. By Julian Mitchell.

We first visited ‘Live From Abbey Road’, as it was called then, a few years ago, the programme was heavily involved with Panasonic and they used Panasonic cameras with tape inside, poor things. Six on the shoulder cameras produced about 60 hours of HD, add some smaller cameras and the edit started looking like a small drama project. The sponsor is now VW but the premise of the show is still the one Producer Michael Gleason dreamt up all those years ago. Great performers and performances captured in unique surroundings.

The editor at the time of our initial visit, Keith Mottram, explained his unique workflow back then which entailed ploughing through hours of HD to illicit some shape for the edit, “We pick the takes we need and have some extras for coverage, so in an edit I’m working with maybe 18 streams of DVCPRO HD.”

Times and budgets have changed as the show now shoots exclusively with Canon 5D MkII DSLRs and has a music show discipline that eschews all the guess work from the edit. Editor of the show now is Jon Walton and he cites Director Matthew Amos as the catalyst for the change, “Matthew comes from the world of live music direction and he identified quite early on that we could streamline the shooting regime by filming a close up version of the performances followed by a mid-shot version. You then make the show in the edit.”

Being still Abbey Road there are constraints on hanging lights as before but the new Director doesn’t have the ‘colour flavour’ template to fit the band idea, again as before, so the lighting is simple, subtle and usually one colour.

The operators, sometimes including the Director, have pre-determined positions to shoot from and intersperse those shots with cut-aways to give Jon some choices to fill or transition with. Some operators use support, no rigs though, most hand hold the cameras and sometimes sliders are used to introduce some movement.

But here is the magic sauce that makes this type of DSLR production work without any worries of artifacts from the sensor’s data rate. The operators are all massively experienced and it’s good old fashioned craftsmanship and some expensive Canon L series glass that gives the show the creamy look that had these DSLRs flying off the shelves in the first place.

What you don’t have now are crash zooms or crew intentionally included in the shots. The show has also moved away from the meet and greet aspects of being at the shrine of Abbey Road. Matthew Amos just sits the artists down for some vanilla-type questioning to be fitted in to the edit post songs. The production feels much tighter as a result.

But the changes aren’t all to do with the production values as now the show is edited on Adobe’s Production Premium software and on a couple of HP workstations, Z1 and Z820. The lack of an Apple product in an edit suite speaks volumes about the lack of support that Apple are showing the pro video world at the moment. In fact Jon used to be a Final Cut Pro trainer and like many editors the arrival of their ‘X’ product coincided with the breaking of all ties with the company.

The world moves on and the fact is that HP makes lighting fast workstations with the latest chip sets in and offer incredibly good support – they also want a slice of the post market. Adobe are similarly aggressive and think they now have a ‘no excuse’ product that can become the main editor on any type of production.

We were at the First Aid Kit session, a couple of Swedish girls with American accents with drums and a steel guitar accompanying. All operators have CF cards for the close-up shoot and another one for the mid shot. Cards are then collected and with a ‘in tray, out tray’ type of data wrangling system then checked bit for bit before being ingested in to the Z1 workstations inside the studio – I say studio but there was a small area cordoned and sound proofed off for the DIT station and editor to sit. Good enough.

Each take is initiated by a slate so a synch can be achieved in the edit. As before the control room records everything multitrack to replace the camera audio.

The content is then taken back to Jon’s company edit suite and put together over a two week period. The other change in the structure of the show is that the record companies want the exposure of the show to bolster any record sales at the time – many of the acts are in London on promotion or tours anyway – so the days of an edited show being transmitted many weeks after the recording are gone. Added pressure for the editor.

Having Jon in the studio while the sessions happen can only be beneficial to everyone. He gets to know which shooter is good at what and will encourage them to maybe pick up on some abstract angles (shoes seems to be popular with some of them). They can even try out a shot and then bring it back to the Z1 to check whether it works or not.

Our visit was at the end of a series and the whole thing ran like clockwork with a close knit team. The production proves the worth of experienced craftsmen and women – if not the value of music television done differently. Cameras end up just being a tool to get the best from. 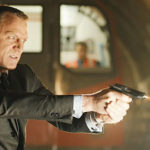 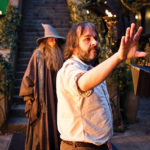