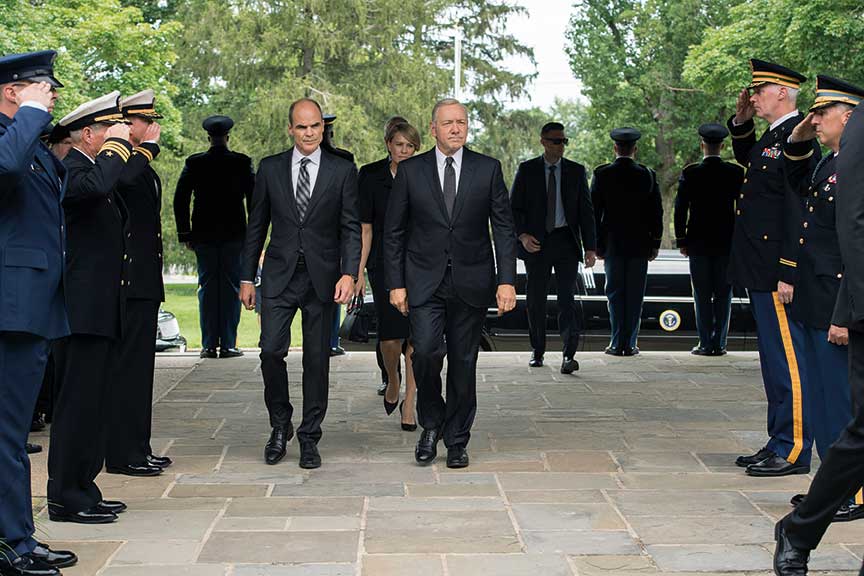 The hugely successful Netflix series House Of Cards is now in its fifth season. But shooting practices are still derived from Season One with some strict dos and don’ts

An episodic TV production is like a ship: at its best when all hands are on deck and the ship is heading in the right direction. House Of Cards is one of Netflix’s flagship shows, and is successful due as much to the regimented but well proven way it’s produced as the way it lifts the lid on the swamp of American politics. Up until Season Four, there was one DOP in charge of all the programming, which in effect meant no time for prep or even scouting. Now that’s all changed, as alternate DOPs and directors work in tandem – but other practices have also been put into effect.

David Dunlap is one of the alternating DOPs and sees the control they have over shooting locations as one of the main reasons the show runs so smoothly. “We have a lot of standing sets and so have a level of control over those,” he says. “Most of them have been shot already and are established. That’s not to say that things don’t change. A bigger challenge is when we have to shoot on location and we don’t always have access to windows and things like that. This past season we have shot in some hotels where we were not able to light through windows. But ultimately, the budget determines the priorities and you take it from there.”

House Of Cards has a huge budget, similar to a medium-to big-budget feature, with full-time rigging crews so any location can be prepared to suit. But the team all work under the same realities, budget and schedule. “We always strive to get the actors and directors time to explore, the rehearsals happen and the scenes are not necessarily already structured,” says David. “We strive to make every shot visually interesting and have a point. The thing I love about House of Cards is that it’s not edited in a frenetic way, it allows the scenes to unfold and actors to sustain a character; I think it shows on screen.”

When lighting the sets, one of the important and regular ideas is to achieve it by giving the actors more of a stage to act on. “For the Oval Office, for example, we light through the big windows which can help to give the lights different qualities,” explains David. “At the same time there are practical lamps, so with a mixture of the two we strive to make it look real by balancing everything. We do have overhead lighting through muslin so we can change colour temperatures and intensities, so in playing with all that you get the basic room. We then hang white ultra-bounce; it’s an oval office so we have to do a circular skirt and we project light in to that for any of the back lights or side lights on the actors. In doing that you have very few instruments on the floor, so you have a great deal of flexibility. Since it’s dramatic lighting it gives us more of a chance to make things happen. We often find serendipitous occurrences that become beautiful. The show is truly loved by the people who work on it and everyone tries to make it better all the time.”

House of Cards is a complete 4K show, even the use of smaller cameras must be that resolution

House of Cards has always been shot with RED cameras. In the beginning they used the original EPIC camera and in Season Three they went to the DRAGON which is a 6K camera. This gave them some new framing options. “We started shooting in 6K but framing for 5K, so we had extra information on every frame line, so you have further flexibility in post and can also stabilise. That’s also been going on through Season Five, but now, with the new RED Helium chip, there is a discussion to have. But our show isn’t VFX heavy, so it might not be time yet to go that way. If we were heavy VFX, we would definitely have moved to Helium by now. Netflix likes to achieve the best images it can.”

The VFX they do have are usually limited to the green screen stage for in-car shots. They use big LED sources that project what the plates are for various changes in density. “We lower them down just above the frame line and supplement that. It puts us in to the right colour world and it’s a bit like the old Hitchcock way of doing it. Again it’s a convention of the show and is certainly great for the actors.”

Looking Back To Season One

Since David’s promotion to lead DOP on House of Cards, he has been spending a lot of time re-visiting Season One which was directed by David Fincher. “I was looking at the things he had a lot of influence over and I’ve been striving to go back to that look, which is a little less de-saturated, a little more mixture of warm and cool tones. I like to shoot at a really low light level and use existing practicals, and computer and phone screens, fireplaces, to really be the key lights to keep it natural and real.

“To help that this year, we’ve been using Lite Mats; they’re LED and very lightweight and really diffused, and you have control over the colour temperature from 3200K to 5600K. We often play with colour temperature to fine-tune the mood of the show. It’s great to be able to do that without cumbersome gels – with these you can dial it in and there it is. I really love them, it’s our future and a great future coming. We hide them all the time, we can tape them to the wall, they’re so thin. But I primarily use them when we get into close-ups to just embellish them. They wrap really nicely and have a wonderful eyeline, I keep them very diffused. This show has never traditionally added any filtration to the lenses so we strive to keep the light very soft.”

The lack of filtration was again something decided upon by David Fincher from Season One and something they have kept going, but David says he may add a little bit more this year for close-ups depending on who it is they’re shooting. But there are more strenuous rules that David does strictly adhere to. “This show has three rules which are not to be broken,” he explains. “One is ‘no handheld’, another is ‘no Steadicam’ and the last is ‘no zoom lenses’. We only have Zeiss Master Primes in our kit, no zooms at all. We tend to live on the wide side, we have lovely sets and we want to see them so we’re more likely to do a close-up with a 32mm than with an 85mm or something like that – it just feels more intimate. 27mm is another one we use. In fact, those two are used for about 90% of everything. If we use a 65mm, it’s a big moment, everybody comments about it – ‘look, it’s a telephoto’. When the camera’s moving when you’re wide it really makes the sets dynamic.”

The two cameras that are used are mostly on dollies but Technocranes and sometimes a Libra head will be used for stabilisation. By David’s own admission the production tends not to do much ‘superfluous camera movement’. Their camera more witnesses what’s happening than is part of the action. “We don’t want the camera to become too much of a participant. It’s a classic approach, and we don’t do a ton of close-ups either. But it’s not like a film from the forties that didn’t have close-ups –we still move a lot and the actors move a lot.”

There are certain rules for shooting on House of Cards : no Steadicam is one of them.

David comes from the film world and looks at the camera’s output as a kind of film stock. They do everything they can on set and know their stock and their flexibility. “We’ve come up with settings for the camera and we don’t use a DIT, another hangover from the Fincher period. The dailies go in and we do our colour correcting using the Pix service, where we can all leave notes – whether it’s set design questions or grading questions. It does link you to a computer, and not like you’re sitting next to the colourist as she is in Los Angeles at Encore Post in Hollywood.

House of Cards could be called an ‘if it ain’t broke don’t fix’ kind of show (you might say that, but I couldn’t possibly comment). The stars are the acting and the script. Nothing must take away from that. They change production parameters when they have to and don’t follow tech fashions (although a jump to RED Helium is probably only a season away). This is mainly due to their original director, David Fincher. 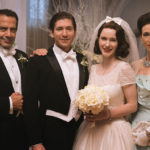