Lubezki and Cuarón Test the Limits of Filmmaking Technology on ‘Gravity’

For Gravity, his latest feature film, director Alfonso Cuarón imagined how it might feel to be stuck in space without a spaceship, slowly running out of oxygen, dodging debris. His former film school chum and long-time collaborator Emmanuel “Chivo” Lubezki, ASC, AMC says that the idea appealed to Cuarón in part because of its elemental nature.

“We wanted it to be very simple,” says Lubezki ruefully. “Four or five years ago, we planned on doing it in Europe with a tiny crew of just a few people. It was geared to be cheap, with one or two great actors. The script was really brilliant and beautiful. There are no guns in the movie, and no bad guys, which I love. What’s against these characters is the force of gravity.”

The irony, of course, is that Gravity became one of the most technically demanding projects ever attempted, and another example of innovative filmmaking from the team of Cuarón and Lubezki, whose previous credits include Children of Men, Great Expectations and Y tu Mamá Tambien. A wide range of techniques were considered and tested, including underwater tanks, mirrors, green screen, robot-controlled moving lights, wire rigs and the “vomit comet,” which involves shooting in a jumbo jet that creates zero-G conditions by plunging earthward for a few seconds.

During this exploration period, Lubezki went to see Peter Gabriel perform at the Hollywood Bowl. “He had the most beautiful lighting I’ve seen at a concert in many, many years,” says the cinematographer. “Incredibly sophisticated. All of it was done with massive LED panels – not the ones that are made for film, obviously. They are not colour-balanced. They have flicker and all sorts of issues, because what they are really, is a massive TV made out of LEDs. I was looking at the concert and I said, ‘Bam! That’s a way to do the movie.”

The filmmakers designed and built a “lightbox” made up of LED panels, dubbed “The Cage.”

“Tim Webber, the visual effects supervisor from Framestore, became interested in the cube,” says Lubezki. “People were worried, but we began working on it together. It was exciting because besides being the tool we would use to accomplish the movie, it was a beautiful object.”

The interior of the cube was made up of 196 2 x 2’ LED panels, fitted with 4,096 LED bulbs. The LED panels would simulate the light coming from stars and the sun and reflected light from earth, but could also project images of Earth, distant stars, or, when Cuarón was feeling playful, images of Sandra Bullock’s children, as the actor was suspended within. A physicist helped Lubezki calculate the distance and apparent size of the Earth and other celestial objects so that the bounce light looked and felt as real as possible. The story unfolds over one Earth day, so the movements of the planets were calculated as well. Complex interplay between the movements of actors, “The Cage,” other lighting, and the camera helped sell the illusion. The actors are in spacesuits for big chunks of the film, making CG replacement easier when necessary.

“The Cage” was not the only piece of high tech equipment on the project. Framestore developed software that helped balance the LED light for digital cameras, for example. “Almost every piece of equipment that we used to do the movie was either custom-made for the movie or was just coming out on the market and in beta testing,” says Lubezki. “Every minute, we were testing and trying new things. It’s exciting, but very scary because if something broke, suddenly you have to stop production. Six months earlier, we could not have done this movie the way we did it. We could not have done it without the special robotic camera mount that was built for us, Framestore, the Master Prime lenses, or the Codex Recorders.”

A number of methods were used depending on the needs of the scene. Extensive previsualization was done, and in some cases, became so sophisticated that it was used in the movie, once the actors’ face and hands were added. In other cases, Lubezki matched the lighting and framing that he had developed with previsualization techniques. A third method was more standard – the filmmakers shot the scene and CG artists created and composited backgrounds. Michael Seresin, BSC was brought in to complete the film when Lubezki had to move on to another assignment.

Lubezki credits the Codex Recorders used on the film as one of those indispensable tools that made the movie possible. “There was no other way of getting the data that we needed from the cameras,” he says. “No other camera had the latitude and quality of the ALEXA, and there was no way of extracting that aside from Codex. The amount of information and the quality of the information is far superior. It helped immensely.”

Digilab, a sister company to Codex, was also on hand to handle all the data and apply LUTs according to Lubezki’s specifications. Digilab helped Lubezki design dozens of LUTs for various situations, and about 20 were used for the majority of the film. Digilab also set up a near-set screening room, and the Codex Vault was used for on-set data wrangling.

“It was very important for me to be able to shoot and immediately go to that screening room and give a certain look to the material, so the visual effects artists could base their work on what I was giving them,” says Lubezki. “The Codex-Digilab team was with me constantly. They were key contributors to this film, and we never had any problems.”

“Gravity was incredibly colour critical,” says technical director James Eggleton of Digilab. “It was the most colour critical project we’ve done to date because we were shooting elements that needed to be integrated with CG. Anything that was lit had to work in the digital realm and actually, on set. You had to know what you were looking at on the monitor. Since it was set in space, the palette of whites was crucial. Everyone’s colour acuity got very good over the period of doing that one. We had three colour monitors on set.

“In terms of the LUTs, we tried to do very gentle looks that would compensate for different types of light,” he says. “That allowed Chivo to shoot parts of the scene under LED light and then shoot under tungsten light, with the end result intercutting seamlessly. Once the menu of LUTs had been locked down and approved by Chivo, he could basically dial in the look himself, sometimes with slight printer light adjustments. It was very, very disciplined, and it had to be because there were so many visual effects downstream. That information had to be communicated through all the visual effect vendors and the post, and it had to be visible in the final product. So it was all about communicating what we had seen on set.”

The additional data gathered by the ALEXA-ARRIRAW-CODEX workflow came in handy for the extensive CG and visual effects work. Lubezki calls Webber his closest collaborator on the film aside from Cuarón.

“ARRIRAW was really important to what we were able to do,” says Webber. “It gave us flexibility and quality. For so much of the movie, we were just filming faces, and everything else was going to be CG. That meant we had to do an awful lot of manipulation of what was filmed. When you’re filming it, you don’t have the whole environment, so you’re kind of filming with the best guess of what you need to do. You’re going to need to manipulate it a fair amount later, and the ARRIRAW enabled us to do that.”

“Even when we were filming fairly traditional live action scenes, there was quite a lot of work to do to join shots together to make it appear as though two different takes were all one continuous shot,” says Webber. “Having the dynamic range that you have in the ARRIRAW 3K images enabled us to achieve things that would have been very difficult or impossible otherwise.“The Digilab people were excellent, and made it an extremely pleasant experience for us,” says Webber. “It was a very good workflow, and on an unbelievably technically complicated project like this, you need things to just work. I certainly didn’t have to worry about the Codex side of things.”

Lubezki also depended on the extra colour depth and resolution during post production. “Many digital cameras have so little information compared to film,” he says. “When you make a tiny change in the DI, these changes appear to be massive. Things can get clogged very easily. Codex gave us a little more latitude, almost the latitude that we are used to. So to have all that information available to us was very important. In the beginning, we thought maybe we didn’t need it for some scenes, because we were only shooting heads. But immediately after that first test, we decided to go with Codex.”

Referring to the extensive previz, Webber says that it was an “almost sort of backward” way to make a film. “It was very hard for everyone making the film to understand the process because what we were doing was so abstracted from the end result,” he says. “It was an amazingly original and brave story to tell, I think, that required us to come up with a set of some big challenges. I think the groundbreaking nature of the storytelling led to some groundbreaking techniques and tools to make it happen. It was an incredibly brave thing, I think, for Alfonso to do in the first place. It was great that he was willing to believe that we could make it happen.”Prior to the shoot, Lubezki had a long talk with David Fincher in which he laid out his plans and asked for suggestions. “He listened to what I had in mind, and especially regarding a couple of especially complex scenes, he thought that with our budget and schedule, we were a couple of years too early to pull it off,” says Lubezki. “So the day we achieved one of those difficult shots, I was so excited. I was jumping and screaming, and I sent David a text: ‘We did it!’. 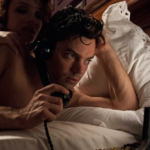