The main character ‘Jay’ (actress Maika Monroe) and the main victim of ‘It’.

It Follows is the latest ‘teen horror’ movie sensation. With references from  American photographer Gregory Crewdson to Hitchcock, Lynch and Cronenberg, you’ll see the shocks and a beautiful digital movie.

With It Follows it’s time to frighten the children again, but this time you get to spot the movie references from the likes of Alfred Hitchcock, David Lynch and David Cronenberg. But perhaps most of all from US cinematic photographer Gregory Crewdson. Referencing a stills photographer in a movie is perhaps a new thing but Google him and you’ll understand where the tributing comes from.

It Follows caught people’s imagination from a well received viewing at the Cannes Film Festival. The key to its success was the decision to do away with the traditional ‘jump scares’ but let the audience see the oncoming terror in a Rear Window type of way. US DoP Michael Gioulakis explains his involvement with this teen shocker and how his Director wanted it to look.

“The Director David Robert Mitchell contacted me after a couple mutual friends of ours graciously recommended me for the job. We were both students at Florida State University but at slightly different times and I was a big fan of The Myth of the American Sleepover so I was excited when he reached out to me with the possibility.

“I read the script and loved it and we met to discuss. The meeting went very well, I felt that we had similar taste and he had strong vision for how the film should be executed.  David wanted to film this with very deep focus and a camera that wasn’t based on ‘jump scares’, but rather allowed the audience to see everything, presenting the scene as a tableau. We talked about different references such as Gregory Crewdson (http://www.gregorycrewdsonmovie.com) and Rear Window and Blue Velvet. Gregory Crewdson takes these large scale, staged cinematic  photographs of American life especially the disturbed and surreal side of it. He’s also a professor at Yale.

“As a DP, I of course loved the idea of long takes and the opportunity to use the camera in a unique way.  So most of our references didn’t really come from the ‘teen horror’ genre. David is a big Hitchcock fan and he had this idea of wanting to really ‘see’ as much as possible in the frame and play with depth of field and using that as a way of suspense. So rather than trying to hide things and then wait for ‘jump scares’. It’s more about seeing the approaching danger in the background and having that in a wide field of view and depth of field to increase the tension.”

“We were fortunate enough to have time before production to go through the entire script together, planning the way we wanted to cover each scene. It was about a dozen meetings or so, over the course of a couple months. David would come into each meeting with storyboards that he had drawn with a clear vision of how he wanted to approach each scene. This was a fantastic opportunity to be able to sit down and really think in depth about the best way to convey the mood, perspective and look we wanted for the film.

Director David Mitchell looking through viewfinder while DP Michael Gioulakis points the way. To the right is Marc-Antoine the gaffer and far right is Anthony Schrader key grip.

“The goal for most of the visual approach was to play things in wider shots, finding interesting compositions and letting the scene play out with minimal coverage. We wanted to convey a very distant, sterile feeling to the camerawork, trying as much as possible to lessen the audience’s perception of a human presence behind the lens. “

“There’s a certain eeriness to these shots, which helps create the setting for the world of It Follows. These also serve as a counter to subjective moments, where we are handheld with Jay, the main character. We felt swapping from the objective lens to seeing from Jay’s perspective would help to intensify some of the dramatic encounters with the ‘It’.

“Many times, this meant budgeting a healthy time to shoot our master shots, where David would work with the actors to figure out the perfect staging and positioning so the shots could exist as a single take without the need for cutaways.”

“We shot on the Alexa with Cooke S4 primes, an Angenieux 24-290mm zoom and Alura 15.5 – 45mm. If film was possible financially, we would without a doubt have shot on 35mm, It wasn’t however. We talked about using film in the beginning but it would be more expensive and the project was ambitious enough for the amount of money we had to do it., so David and I both felt the Alexa handled colours in a certain way that was the closest to what we were after. We discussed shooting anamorphic, but ultimately chose spherical for the ability to shoot at fast apertures due to the significant night exterior work in the film. We wanted a very clean look and any anamorphic glass that we could realistically afford would have aberrations and distortions especially on the wider focal lengths we wanted to shoot with.

“We’re both big fans of anamorphic but maintaining the look we wanted for the night shoots wasn’t feasible with the lenses. For the night exteriors lighting anamorphic for a 2 or 2.8 stop might make it a little soft and highlight the aberrations.

“We didn’t do anything crazy colour wise, I think a lot of it comes from the design.”

“I took my lighting cues from a variety of references David and I discussed. The still photographer Gregory Crewdson was a large inspiration for much of the visual language, as well as Lynch, Hitchcock, Cronenberg and others. I tried to keep things motivational but with slight theatrical elements.

“As part of our visual motif, we wanted to be able to see far into the distance, so our night exteriors were no different. Marc-Antoine Serou, my gaffer and Anthony Schrader, my key were instrumental in making this happen. There were many night shoots and a grueling schedule with limited crew and they both did an amazing job. I feel really blessed to have the crew that we did.

“The opening shot of the film was a 360 degree pan with some zooms on about 50ft of track. There wasn’t the budget for anything fancy, like a remote head, so I had to operate on the dolly and do a bit of a dance in a circle with the camera as our dolly grips tried to keep up with our actress. We tried to give ourselves enough time to rehearse several times before the light was right.  We rehearsed and rehearsed and got just a couple good takes in before there was no light. It was tense!

“It is a hard thing to create the suspense, you have no music on-set, no sound design. I think that’s why we spent so long thinking about the sequence of shots and how they would play out.  It helps when you have a director who has a strong vision.

“We did the grade at a place called Tunnel Post with Mark Osbourne. We kept with the idea of the references we had already decided on. David had put together this pretty comprehensive ‘look book’ from Crewdson to ‘Paris Texas’, that we liked. There was a lot of Technicolor examples that David liked but we didn’t want to go for an exact ‘Technicolor’ treatment but something between the photographs and the movie references. A lot of it was already built in to the production design.”

It Follows is playing in the UK at the moment.

Nothing better than the real thing? 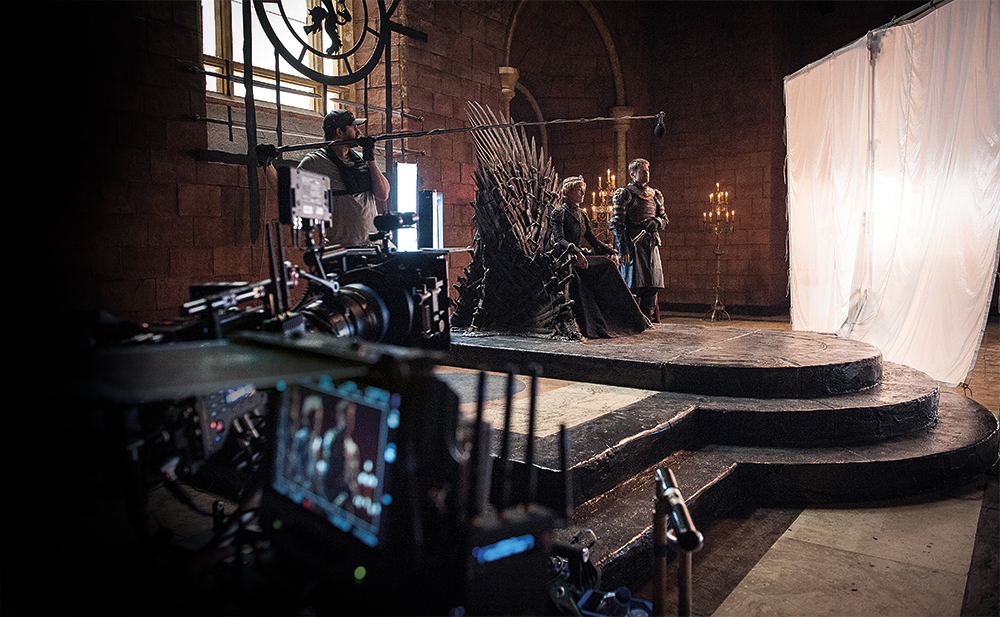