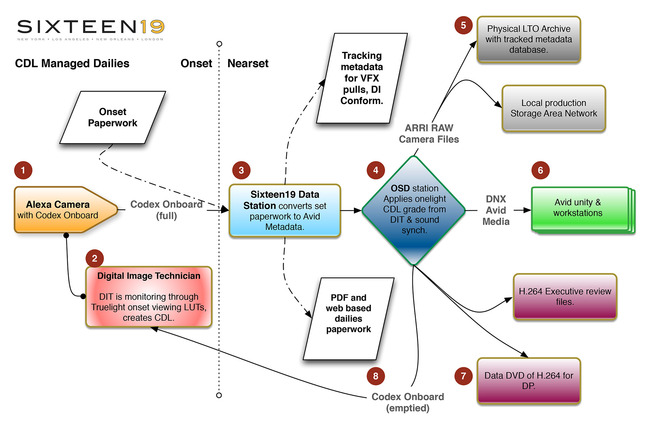 How To: Do ArriRAW Properly Part Two

What were your thoughts when you first discovered that you were going to be taking an ArriRAW film through post?

Sixteen19 was involved with some of the very first ArriRAW jobs anywhere. We shared the workflow execution with another company on Extremely Loud, Incredibly Close in New York in 2010, and then set up Gambit soon after in London.

The Codex recorder had just been certified by Arri to be used as a recording device for ArriRAW, which was a significant development because Arri themselves hadn’t made a recorder for this format – they were relying on a secondary market of companies to build accessories for the camera.

There are a few factors that go into investigating any new format:

For feature film work the first thing you need to find out is what the format is doing in it’s colour space and debayering. Basically, how the raw data will be processed in order to look like film.

In simple terms the colour space is represented by a ‘colour curve’, which basically describes how the image colour tonality is represented within a digital image. Sony has S-Log, Panavision has PanaLog, and Arri has ArriRAW – each of these are manufacturer-specific ways of encoding and representing a digital image. These in turn almost always reference Cineon encoding, which was the original file type that Kodak developed to represent a film frame as a film scan.

The debayering really just means how software further down the workflow will interpret the raw digital image data into a coherent picture image.

Once you’ve worked out how these two elements work together to produce an image out of the camera system, then you are ready to try and use these things to give the DP the look he is after on the dailies, either through a DIT colour grading on set, or by having a dailies colourist take the more traditional route and do this work after shoot is finished.

It’s best not to lose sight of what the dailies pipeline is for – it’s not just about creating pretty pictures, although that is the most immediately obvious role that dailies have. Doing the daily rushes on any film is as much about organising the material that’s coming from set, so that it can be coherently used by an editor and post production team for sometimes four times as long a time period as the shoot.

So the hidden side of using any new camera is also working out just how you can get as much information from the process as possible. This is called the metadata, the information about the data you hold.

How much involvement did you have with establishing the on-set workflow? How important is collaboration between DIT and DP on the one hand, and equipment on the other?

In my role as Workflow Supervisor, I usually kick around the workflow between the DP, editor and producer/studio for a few weeks in Pre-Production. The DIT usually comes into that conversation as well, which is a factor. There are also tests that need to be run first of all from the set to dailies/editorial, then right the way through to VFX plate delivery and the digital intermediate finishing for the feature. It’s a mix of technical knowledge, equipment product knowledge and politics. The diplomacy and politics can measured exactly between the requirements of the principal creatives and the shortfalls of any budget.

The collaboration starts with how the DP wants to work with a DIT, which can range from a simple monitoring setup that shows people on set the camera images, and can grow into a whole grading setup ‘in the tent’, with full colour management and image control.

This collaboration also extends to the editorial crew, in working out precisely how they want their files collected and organised. The quality control (QC) pass to check each file is intact, sound synching to picture, and laying everything down into the correct bins and structure are all negotiated with the editor and crew.

And finally the archive is made, which is arguably the most important process of all, because this is where the real asset is collected. It’s stored on tape called an LTO5 tape, and is akin to the exposed negative of a film shoot. Therefore, treat with extreme care.

The job of Workflow Supervisor is to make sure that the transition between each step is managed and controlled to ensure that every frame gets to editorial and onto an archive tape.

How did you ensure monitor calibration throughout the chain?

You hire a colour scientist to generate the required Colour Management Look Up Tables (LUTs) and calibrate monitors to the required specification. This used to be real voodoo, but now comes down to standards that can be pulled from software. The Arri website even has quite a good LUT generator that can make you LUTs for a few different colour management systems.

It’s probably just as important to ensure that all of the key monitors around the set and dailies environment all match in terms of calibration. Everyone looking at a particular monitor that’s out of alignment with everything else can cause quite a few problems down the chain, not the least of which is the confidence in the pipeline itself. Confidence is sometimes the hardest thing to get back on-set, and so again this work should be done during the camera testing period.

This is one of the most important things to stress. The advent of digital cameras trashed the notion that there was any ‘one way’ to execute post production on a feature film. It has actually done the opposite – given filmmakers an unrivalled set of options for post, to improve the production values of the film, so it can compete with films that have double or triple the budget. The camera tests before shoot are no longer just camera tests – they should be extended into the teams that will execute dailies, VFX, and the finishing of the film. One doesn’t have to lock down every detail of every shot before the first day of the shoot, but the whole process should be described, agreed on by heads of department and tested before the first day of shoot.

The material came in to you via Datapack – a simple process?

Fairly straightforward. It’s basically just like copying any other data – it just takes time. After a few tests, you start to get a feel for the time factor – 2x runtime, 3x runtime, and this should be communicated to all so people have an idea of the timing.

The more important process is cycling the mags back to set. Because a film’s budget can only afford an allocation of a set amount of mags, and the camera department shouldn’t have to stop filming just because a mag isn’t available. It’s not just a matter of copying and sending back, however, as the digital assets from that datapack should only be cleared when the archive has safely written out to tape – only then is the asset ‘secure’ and can be deleted from the mag.

The private joke about workflow diagrams is that the actual work isn’t in the bubbles, but in the lines.

Any special considerations that had to be taken into account due to using the ArriRAW format?

They are not special considerations, but people need to be aware of the file size – ArriRAW is a large, high bandwidth, high latitude file, and so takes considerably more time in data movement and  processing than ProRes or smaller compressed files. Also that there are subtle differences between the video line out of the camera that you use for monitoring and the actual file that the camera records. During your testing phases with the DP and crew, you should be able to describe this and factor it into your working methods.

And finally, say I’m coming to you with my latest movie and I’m planning on shooting it in the format, what are your three top bits of advice?

• Give plenty of time for testing during your camera tests – don’t leave it until first day of shoot.

• Consult not only with the DP, but also with the editor and post supervisor down the chain – insist on a workflow test from the camera tests right through to a conform of the data at your DI house, that takes into account all the stages and people that the data has to pass through.

• Don’t have one person do everything – this may be the cheapest way out, but once shooting ramps up, you’ll regret your decision when that guy is hospitalised due to working for days straight. It’s not pretty…

Go To PART ONE 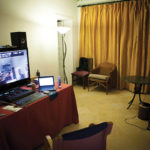 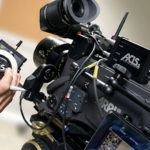