War for the Planet of the Apes is the third instalment in the blockbuster franchise which follows highly evolved chimpanzee, Caesar, and his struggle to defend his race against an army of humans, led by a deadly and tyrannical Colonel. Caesar is forced to reconcile with his inner ruthlessness as he goes on a journey to avenge the death of his kind. As he comes face to face with the perpetrator, Caesar is pitted against the Colonel in a final battle that will determine the fate of both species and the entire world.

Digital technology is remaking toolsets in many fields, but in filmmaking, the pace of change is nothing short of astonishing. From one project to the next, the tools are refined and redesigned based on the artistic goals and tangible realities that are presented. Into this ongoing evolution steps Michael Seresin BSC, a cinematographer who resolutely insists on keeping the ones and zeroes at arm’s length. After successfully overseeing the sprawling, high-tech operation that led to Dawn of the Planet of the Apes in 2014, Michael re-teamed up with director Matt Reeves on War for the Planet of the Apes. Although the former film earned upwards of three-quarters of a billion dollars, the latter was not to be a carbon copy in terms of its look. To begin with, Dawn was shot in native 3D while War was shot with the large-format ARRI ALEXA 65.

“The whole idea of the shallow depth-of-field was baked into the concept of this movie from the very beginning,” says Michael’s first AC, Taylor Matheson. “Michael tends to light economically and likes wide-open stops, and Matt and the studio wanted something that was shot wide open. We shot a lot of material at minimum focus. The appeal of the ALEXA 65 was obvious: the resolution and the ability to create a very rich negative, and the option to play with it in post – to zoom, reframe, and do all sorts of directing after the fact. But the bigger the sensor size or larger the film negative, the shallower the depth-of-field. So, from a technical perspective, it was an incredibly challenging movie.”

In a widely-varied career spanning 45 years, Michael’s camera has brought us The Ragman’s Daughter, Midnight Express, Fame, Birdy, Angel Heart, Come See the Paradise, Angela’s Ashes, and Harry Potter and the Prisoner of Azkaban, to name but a few.

“Some cinematographers love the whole technical aspect of digital filmmaking,” says Michael. “I’m of the generation that came up with analogue film, and I use the same principles of light. Composition is composition and we use light, camera movement, et cetera as we did before – however you achieve that, to me, is secondary. There are more options and flexibility with digital, but it sort of worked fine before. Probably the biggest restriction is accommodating the CGI guys. It doesn’t alter my lighting. It doesn’t alter the composition. I just hire people who know about the technical stuff. There are infinitely smarter people than me and they love that. They are concerned with making the technical element work, and I concern myself with lighting and composition and do as I would have done had we been shooting on film.”

Subtle camera movement also plays an important part in the look. More than half the shooting situations were vast night exteriors accomplished on a massive set. Michael says the imagery is “on the darker end of the spectrum”.

“We opened the film shooting on Vancouver Island, and things felt kind of heavy and overcast and dark and miserable and rainy,” he says. “Then we got a week of the most immaculate, sunny weather, but it gave it a whole other look. In the bigger scheme of things, it worked so much better because it’s such a different part of the movie. It looked sort of prehistoric, which works. We dropped the colour out – the overall look of the film will be quite monotone. Matt and I have a shared aesthetic and that makes it much more enjoyable, that’s for sure.”

At times, as many as eight ALEXA 65s were in use on the shoot, three or four on the main unit (often on Libra remote heads, Techno-cranes or Techno-dollies) and often three on the second unit. The package constituted roughly a quarter of all the ALEXA 65s in existence at that point. The camera’s sensor is 3.7 times the area of the ALEXA XT’s. DIT Simon Jori says that the ARRI sensor is a perfect tool for Michael’s naturalistic, low-key lighting, in which a contrasty, dark and moody LUT often interacts with hot key light.

“That ARRI sensor has a beautiful filmic response to light, both in how it rolls off highlights and in its sensitivity and roundness in the low end,” says Simon. “It never looks like ‘video’. Michael’s single-source approach to light, combined with his utter fearlessness of the dark side, roots exposures firmly in the lower end of the scale, and leaves a real honesty to the images. They never look lit, but still have an energy.”

With the ARRI Prime 65 lenses, wide open meant T2.2 to T4.8, depending on focal length. Taylor Matheson was challenged, yet thrilled by Matt’s treatment of focus as another creative element. It was his second project on the ALEXA 65.

“Rather than play the focus in a way that is conventional or normal, Matt’s approach involved a process of discussion based on the content of the script,” says Taylor.

“Focus pulling is very technical, but there can be an emotion and a feeling toward it. It can add to the disturbing or off-putting nature of certain shots, or add to the harmony and flow. We were only able to do four to six shots a day. Care was spent on every camera, every set-up. This was a demanding show on many levels, and it made me better at what I do.”

Low-light situations were not a concern, according to Simon Jori. “Honestly, 1280 ISO on the ALEXA 65 looks better than 800 ISO on regular 35mm digital cameras,” says the DIT. “That’s a real bonus, considering some of the medium-format lenses that are needed to cover the large sensor area are not as fast as we are accustomed to using. Usually when one ‘gains up’ a digital camera signal a stop or more, the otherwise insignificant electronic noise, lurking in the shadows and mid-tones of the shot, is exponentially increased – often resulting in objectionably coarse and grainy images. With the ALEXA 65, the pixels are so relatively small compared to the final frame size, that any increased noise is so fine-grained it has far less apparent effect on the image. We could increase ISO to 1280, 1600, even 2000 if needed without suffering problematic noise levels.”

SXR Capture Drives were new on the market at that point, and they enabled the crew to record full 12-bit 6.5K sensor data in ARRIRAW at up to 60fps. The 2TB capacity of each drive could record more than 43 minutes at 24fps – the equivalent of a 4000ft roll of 35mm film. That gave Matt the freedom to do very long takes, thus allowing the actors to get into a rhythm. “Sure, there are CG apes riding horses, but believe it or not, this project is really all about the acting and the audience’s connection to the characters,” says Simon Jori. Two separate and programmable video monitoring outputs on the ALEXA 65 are features that DITs love. “I can set up one for me to grab a LogC feed – non-colour graded to see the full range of the sensor signal – and leave the other in a more immediately viewable Rec. 709 mode for on-camera monitoring,” says Simon. “The assistant feed can also have separate status information and image magnification applied to it, if needed, without affecting the LogC feed to me at the DIT station.”

ARRI’s sensor has a beautiful filmic response to light, both in how it rolls off highlights and in its sensitivity and roundness in the low end.

At the station Simon used Pomfort LiveGrade, driving BlackMagic Designs HDLink boxes. He applied a base 3D-LUT and performed a fine-tuning colour grade under that within the ASC CDL format. The LUT used was designed by Michael Seresin and SHED colourist Matt Watson during prep. The LUT was slightly softer than the regular ARRI K1S1, with an EXR-style colour palette and a cool bias for a post-apocalyptic feel. The colour-graded 1920×1080 4:2:2:2 signals were displayed for the DP on calibrated Sony 25in PVM OLED monitors in a light-controlled environment. “You are sitting in the dailies screening room in real-time, right there on set,” says Simon. “At the DIT station, we have iris control of all cameras. That’s a fantastic way to work, keeping the camera exposure right where it needs to be at all times, riding it during shots as required. Combine that with on-set colour grade control and you have the perfect way to keep the exposure in the sweet spot of the sensor, to ensure the final DI has the room they need to produce those images we were seeing on set. That control is vital when riding the creative edge of exposure, as was
our mantra.”

’WAR’ is the final part of the ‘Caesar’ trilogy.

The Codex Capture Drives, once ejected from the cameras, would be taken to the camera truck for downloading using a Codex Vault XL. “The Codex system really speeds things up,” says Simon. “It allows for very fast transfers of the large amounts of data from the drives to Codex’s proprietary 8TB flash memory transport drives. The speed here was important, helping our loader, Preston Cooke, keep on top of all that footage. We had 20TB of footage some days!”

The Codex Transfer Drives were sent to a mobile truck lab operated by SHED, the boutique post house in Santa Monica founded by Yvan Lucas. SHED used the truck for remote work and set up their operation in the production office for the studio and backlot work. There, a second Codex Vault XL unit would take the 8TB transfer drives from set and allow SHED data manager, Stephan Marliss, to quickly transcode the ARRIRAW files into 4K ProRes (as mezzanine files) for the fast creation of the editorial deliverables in FilmLight’s Daylight system. Stephan and colourist John St Laurent, would incorporate colour grade information from set – polish the look as needed, and generate dailies files, archives, and other deliverables.

“I really try to stay focused on the shooting process,” says Simon Jori. “If I can bring someone else up to speed on the downloading procedure so that my attention can stay on assisting the DP, I will every time. Here Codex helps again. Once I have set up the workflow, my loader can stay on top of the day-to-day tasks and keep things rolling. It’s a pretty easy system.”

Codex works with SHED to help Simon ensure the technical side is invisible to Michael Seresin. “Everything was seamless,” says Michael. “The quality of service they gave was immaculate. We didn’t have them on Dawn, and on this one, they really paid off. The lab technician, John, was absolutely brilliant. The dailies were beautiful, pretty much as Matt and I had seen it in the DIT tent. In terms of footage shot, it was massive, and we were working pretty ferocious hours. We were so pleased, and trusted them. The mobile unit, as well as the California operation, is pretty slick. But, it’s not just the machinery – it’s the people who are just on it, that really come through. I like that they are a small company, and I know the bosses.” 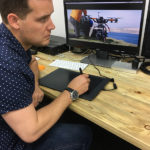 Alternative Raid - In Association With Samsung 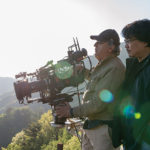