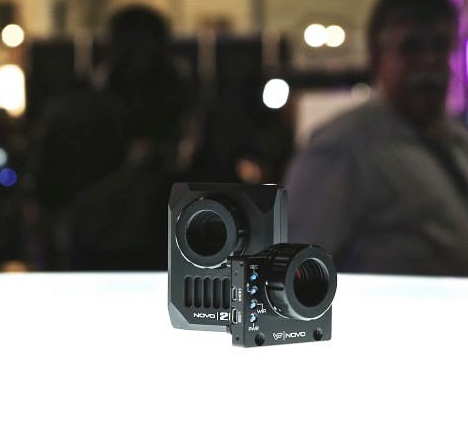 Novo and Novo 2k at Cinegear this week Start off with a GoPro 3 and then reverse engineer it for the pros.

A newly released digital cinema camera called the Novo is designed to provide filmmakers with the power and versatility of the GoPro Hero3 but with fewer cinematic limitations.

The Novo, engineered and created by View Factor Studios, is available for rental exclusively at Radiant Images, an L.A.-based rental house and digital cinema innovator that collaborated on the design and function. The two companies jointly announced the release of the Novo on Friday.

The Novo is viewed as an ideal solution for cinematographers who are enamoured with the capabilities of the new GoPro Hero3 but held back by the Hero3’s cinematic limitations.

Key features of the Novo include a C-mount lens system plus a PL mount adapter with back focus adjustment, which allows for extreme macro shooting. The lens mount eliminates the fish-eye look, or bubble effect, usual with the GoPro. In addition, the Novo offers exposure control capabilities that open up a wide-range of artistic possibilities for cinematographers and camera operators. The auto exposure function standard with the GoPro can be disabled on the Novo, permitting cinematographers to use the lens to manually adjust the aperture.

The lightweight aluminum housing itself is 20 percent thinner than the GoPro Hero3, fits into the palm of a hand, and includes three 1/4-20 and two 10-32 mounting points. Also, four buttons on the front (REC, PWR, WiFi & AUX) are assignable to several functions depending on the application. The Aux button turns the auto exposure on/off, but in the near future will also be utilized for other functions, such as digital zoom, a tool to check critical focus.

The Novo offers these enhanced cinematic features while also retaining the GoPro Hero3: Black Edition’s key functionality and accessories, such as the LCD touch screen, power backpack and WiFi connectivity for wireless camera control. Like the GoPro, the Novo also shoots cinema-quality 2K and 4K resolution.

“Every word of that definition fits what we were able to accomplish with the Novo camera,” Mansouri said. “The Novo retains what is great about the GoPro Hero3 but goes a step further to create a powerful new tool to help cinematographers get the difficult shots and achieve their artistic vision without compromise.”

“We took on the challenge of building the Novo because we recognised that the GoPro Hero3, given its small form factor and ability to shoot 2K and 4K makes it invaluable for cinematic productions, yet there was room for improvements,” he said.

View Factor technicians took apart the components of a GoPro Hero3 and engineered a new design to make the camera work for a variety of C-mount lenses, from as wide as 3mm to as long as 200 mm. Mansouri and his team at Radiant Images worked closely with View Factor to identify and help implement the other key modifications, he said.

For example, the two teams incorporated a custom high-performance optical low pass filter (OLPF) as a solution to the GoPro Hero3’s back-illuminated sensor.

The Novo contains GoPro components, but everything on the outside plus the circuit board was built by View Factor.

“We brought Radiant in to collaborate on this project because they already had made a mark in the small form factor camera arena, plus we had worked with them before and knew we could trust their experience and expertise,” said von Badinski. “It took a strong team effort to pull this off.”

Radiant Images is known for its work with Silicon Imaging’s SI-2K Mini Sensor on such movies as 127 Hours and End of Watch, in which Babak Mansouri, Michael’s brother, conceived a palm-sized cinema-quality camera – the SI-2K Nano – especially for the POV style of the gritty cop drama.

Due to the expensive development cost and ongoing improvements to the camera, the Novo is presently only being offered for rental, with Radiant Images as the exclusive rental house worldwide. The company has 30 in stock. The Novo rental package includes the new camera, custom geared C-Mount lenses and the all the required accessories.

The GoPro has been used for years in cinematic productions, with cinematographers accepting the limitations. The small camera is ideal for shooting in tight areas, for example, but the wide-angle lens creates issues in effectively framing a shot.

With the Novo, a cinematographer can get the same close shot and also be able to choose from a variety of focal lengths to create a narrower field of view. The back focus adjustment, too, will enable extreme macro shooting on set. The photographed area can actually touch the lens and still maintain focus, Mansouri said.

“Cinematographers are going to be able to achieve shots that until now were too time consuming or considered too expense,” he said.

Radiant Images also is working on creating an underwater housing for the Novo as well as crash cams.

The Novo can also be used in the custom GoPro array system developed by Sinclair Fleming, an in-house engineer at Radiant Images. The array is designed to perfectly align a series of cameras on a curve and prevent shifting up and down during a shot, meaning very little post-production alignment is necessary, Mansouri said. The array can be stationary or even mounted on a Steadicam due to the light weight of the cameras.

“Our goal with the Novo and our other creations is to remove limits and create possibilities,” Mansouri said. “I’d like to think we’re on the right track.”

Gemini 4:4:4 Gets A Significant Price Reduction As Sales Climb