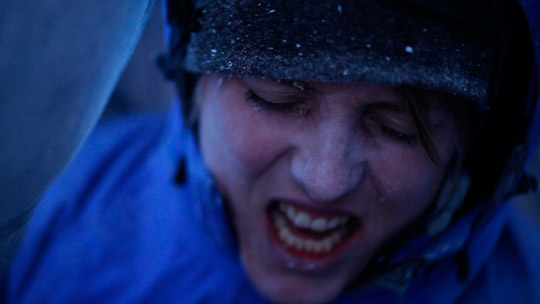 Part of Animal Planet’s recreation using DSLRsTwo climbers are perched on a small ledge up a mountain in the Swiss Alps with the worst electrical storm the region had ever experienced.  Darlow Smithson Productions re-enact the crisis for the Animal Planet I Shouldn’t Be Alive series, armed with a Canon 5D Mark II hired from VMI.

Sometimes rules have to be broken.  Such as when recreating events that took place on an wind-swept Alpine mountain-side.  Add to this the requirement to film action and dialogue taking place in a two-man tent and the crew is entering new territory.

Despite there being more broadcast-approved cameras on the market than ever before, until recently most television producers made fairly predictable choices.  There were a few notable exceptions, such as The Royle Family which is filmed in 16mm, showing what can be achieved by non-standard broadcast equipment.  But as a generalisation, a handful of camera manufacturers still shoot the vast majority of television.

The arrival of modular HD camera designs and DSLRs is starting to change this status quo, allowing DoPs the freedom to shoot and achieve virtually any look.  The Canon 5D Mark II, used by DoP Robert Shacklady for a new Animal Planet production, is possibly the most portable broadcast camera ever developed.  Delivering excellent low-light pictures with massive control over the depth of field, the 5D offers big camera performance with handicam portability.  For Shacklady the selection of the 5D was a god-send:

“The story unfolds in an emergency tent on a ledge up a mountain in the Alps, in the midst of an electrical storm.  Getting inside the tent was impossible so other solutions had to be found. This was where the 5D would come in to its own.  I stripped the camera down to just its body and prime lens enabling me to shoot through holes cut in the tent fabric.”

Another still from the recreationAround 15 minutes of the final episode were shots of the actors in the confines of the tent.  The director’s main challenge was therefore to maintain the interest of the viewers in this claustrophobic setting by varying the pace of the drama, capturing the full expression of the actors and filming in a way that was simply visually interesting.

The crew hired a range of Zeiss primes from VMI, ranging from 18mm to 100mm.  Shacklady experimented with different styles, occasionally with disconcerting effect:

“To increase the tension I got close in with the wide 21mm, getting right up to the actors with a minimal depth of focus, them letting the faces go completely out of focus… simulating what there were going through as they went in and out of consciousness.  I also added the 50mm f1.4 – wide open – fixed at minimum focus and just moved the camera in and out to focus.”

The cold rain made filming in this way made life arduous for the cameraman but the camera itself sailed through.  The 5D has a level of water resistance which meant that it performed consistently throughout while the Panasonic AJ-HPX3700 that accompanied the shoot had to be protected with a rain cover.

Barry Bassett of VMI voices a note of caution, however:  With a non-standard compression codec and an unusual form factor, “my advice is that if you want to use the 5D or similar DSLR kit in an unfamiliar environment, test it thoroughly to ensure that it will deliver what you need efficiently and without fuss.”

For Robert Shacklady, in practise the camera worked flawlessly, requiring special treatment only once.  One unusual aspect of the programme was the requirement for lightning strikes which exposed one of the idiosyncrasies of the Canon unit.  Shacklady takes up the story:

“Half way up a mountain crag in the Lake District, we needed a lightning strike that was small enough to run off a single genny… We originally opted for a 3Kw Atomic strike. But after testing with the 5D we found the Atomics worked at a  frequency of 15Hz. The rolling shutter of the 5D tore the picture in to three bars… totally unacceptable.  After more testing at Panalux we went for a 100Hz unit that could maintain a bolt of light for up to 10 seconds meaning the ‘flash’ could go over multiple frames.”

Due to the extreme shooting conditions and location, other technology was kept to a minimum.  Memory cards were immediately dispatched to the editor as they were filled for immediate post production.  Lighting was limited to a couple of LED panels while the director monitored the action on a 17inch monitor.

The crew survived the experience and prepare for the next edge of the seat edition.  Again a 5D will be the camera of choice. 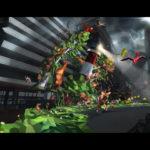 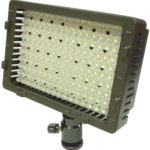