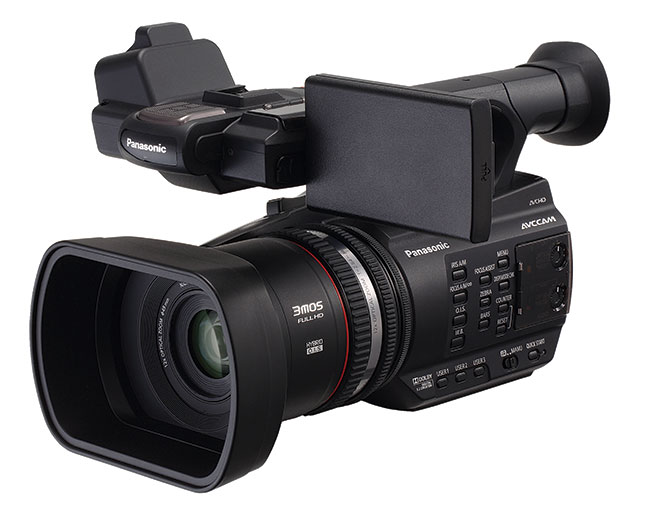 For under £2,000 including tax you can get this new AVCCAM camcorder from Panasonic.

ADAM GARSTONE approached the review of this new Panasonic camcorder with a heavy heart but soon began to appreciate the ‘bang for the buck’ idea behind it.

I have to admit that my heart fell a little at the prospect of reviewing Panasonic’s new AG-AC90 – yet another handheld camcorder in the PD170 style, but pulling the camera from its box I started to change my mind.

For its very competitive price (around £1500 plus VAT) the AC90 is a really nicely packaged product. It’s lighter than it looks, but is made of good quality plastics and feels like it’ll stand up to the normal levels of abuse. It’s well balanced too, whether you are holding it at eye level or low level by the top handle. The audio controls are protected by translucent, smoked plastic covers and the LCD slides away into the front of the top handle, giving it a sort of lop-sided hammerhead shark look. Overall, it looks and feels a lot more expensive than it actually is.

It’s good to see proper XLR inputs in a budget camera. There is a built-in 5.1 mic – of sorts – no-one in their right minds would be using that though, right? It’s also good to see that Panasonic have kept the top-handle zoom rocker and record button. Most of the user controls are buttons on the left side of the camera – it would have been nice to see a white balance toggle switch and, perhaps, gain, but you can’t have everything for a grand and a half.

The main LCD has a 3.5” diagonal and about 1152k ‘dots’ (whatever that means). In practice it’s bright, clear, has good resolution and, as a big bonus, is touch sensitive, so most of the User Interface features are accessed through it. The menu system is simple and clear – Panasonic are usually pretty strong in this area – and the touch screen is nicely responsive. There are Panasonic’s usual cine style matrix and gammas available, coring, knee control, skin tone detail – again, great to see on a budget camera. As well as the usual zebra, there is also a good ‘peaking’ style focus assist (red only). The eye-level viewfinder is OK, with rather low resolution but good colour and contrast – I’ve seen worse on much more expensive cameras, but there is no way to lock its position (not even detents) so it tends to flip down when you least expect it.

The lens features three, endless encoder style rings for focus, zoom and iris – very unusual in this price bracket. Interesting, you can do without the gain switch as the iris control doubles for this function. Once the iris is wide open, further turning of the encoder ring starts to up the gain. Neat.

What isn’t so neat is the feel of these controls. There doesn’t seem to be any connection between the control and what it’s controlling at all. This is particularly noticeable with the zoom ring – there are seconds of delay between turning the ring and the lens zooming. To be honest, it’s pretty close to unusable. Fortunately, the main rocker control is responsive and controllable. The lens itself has a 35mm equivalent of about 30mm to 380mm at f/1.5 to f/2.8, with really excellent optical image stabilisation.

The AC90 features Panasonic’s iA (Intelligent Auto), which turns the entire control of the camera to automatic, and the autofocus is both fast and accurate, with no hint of breathing at the long end of the lens. This is good to see, with the difficulty using the manual controls, and vital on a camera like this, which will often be used “run-and-gun”.

Panasonic have a bit of a thing about three sensor camcorders, and the AC90 is no exception, having three, 1/4.7”, backside illuminated, CMOS, 1920×1080 sensors. 1/4.7” is very tiny, but the backside illumination should help with the sensitivity and, of course, three sensors means no Bayer pattern. It’s worth noting that the tiny sensors will result in diffraction limited resolution at pretty much any aperture you set on the lens.

The sensor output is compressed using AVCCAM and recorded to SD card (there are a couple of slots). Available frame rates are 1080/25p, 1080/50i, and 1080/50p (with 576/50i, if you like that kind of thing) at data rates up to 25Mbps for the 50p. I’m generally not a big fan of AVCHD/AVCCAM implementations (the CODEC is fine, but hard to do) – though the most recent cameras seem to be getting much better. The AC90 is no exception here, with far fewer compression artefacts than past Panasonics. The image quality itself shows great tonality and colour – products of having three sensors – highlight detail in particular is beautifully rendered. Unfortunately, resolution was very poor – obviously not helped by those tiny sensors and the resultant diffraction limitations.

There are a couple of things marring the AG-AC90 – those terrible lens controls and the poor resolution – but the automatic capabilities, the lovely tonality and the overall package still make it an interesting camera, especially at the price point. You get a lot for your money. 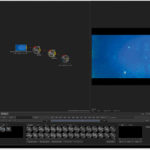 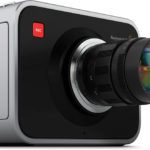