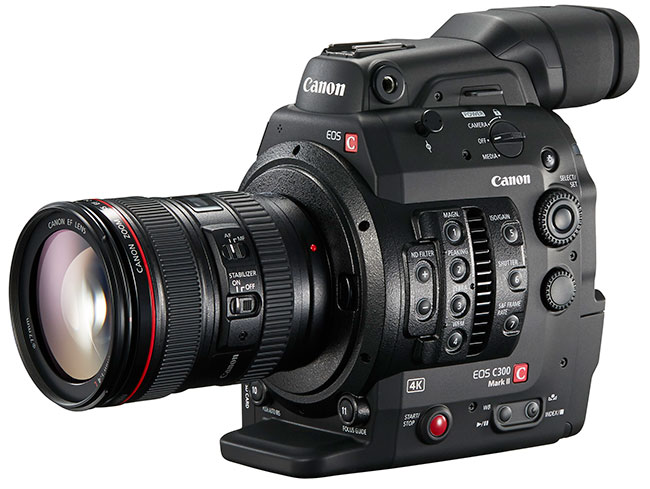 One Buddhist legend tells of Kannon, struggling to comprehend the needs of all the unhappy beings in the world. Her head splits into eleven pieces under this strain (ouch!), so the buddha Amida – seeing her plight – gives her eleven heads, to better hear the cries of the suffering.

I’m not sure that owners of the Mark I version of Canon’s C300 were particularly suffering, but it’s refreshing that a company, named after someone who had twenty two ears, has listened to its customers. The C300 was a startlingly successful camera, combining flexible handling with its modular design with fantastic image quality. They sold lots.

But there were always a few irritations, which the Mark II largely addresses, whilst adding a whole heap of under-the-skin improvements that make the new camera just like the old one, only better.

It was common knowledge that the innards of the C300 were basically the same as the C500, so it was irritating that you needed an external device to record 4k. The headline feature of the C300 Mk II is internal 4k recording, using an intra-frame, 10 bit, 4:2:2, XF-AVC CODEC up to 410Mbits/s. The data are recorded to a pair of CFAST cards – either to both simultaneously for instant backups, or one will take over when the other is full. You can also record an HD/2k proxy to SD card at the same time, though it’s a long GOP CODEC so will still need to be transcoded for best edit practices. There is an approved list of CFAST cards for you to use, and they are expensive, but they seem to be a reliable medium, and the prices will come down. Irritatingly, you can still only record clips shot at the same system frequency (24/25/30fps) on a single card. Once the card is committed to one frequency – say 25fps – you’ll need another card to shoot 24fps.

The data comes off a new Super 35mm format sensor, that boasts three new features. Canon claim 15 stops of dynamic range when used with their new C-Log 2 gamma profile, read-out of the data is super-fast to reduce rolling shutter artefacts, and the sensor features dual-pixel CMOS AF – dedicated pixels to improve speed and accuracy of auto-focus. More on this later.

There were a couple of other niggles with the older camera. The captive cables that joined the LCD and XLR module to the camera were famous for breaking. The Mk II features cables that have robust connectors at both ends, so when one breaks you can replace the cable rather than the whole top module. The top handle in the Mk I was a little flimsy as well – held on with a single knurled knob. The new camera features a cradle that is fitted to the camera, with a pair of hex screws to attach the handle to the cradle. It’s solid.

The camera is generally sturdier than its predecessor, with improved environmental seals, making it slightly larger and heavier. In general, however you would be hard pressed to tell them apart.

The C300 Mk II can also be used as a 2k/HD camera – either by on-camera downsampling of the 4k sensor image or, for high frame rate recording (up to 120fps) using a window in the centre of the sensor. Sure – you’ll need to change lens if you use the crop mode, but at least neither downsampled nor crop modes will exhibit the moiré that you find on pixel-skipping cameras.

The ND filter wheel has been extended with a second disc – bringing the maximum ND now to 10 stops. this second disc comes into play above 6 stops, which changes the optical path, so you need to refocus. You can turn off the extended function in software, if this is a problem, and stick with the 6 stops.

The new autofocus system is outstanding in a camera of this class. Of course, you need to be using lenses that support autofocus – mostly Canon’s still lenses which aren’t optimum for film work – and many operators shy away from autofocus anyway. Nevertheless, the demands of single operator shooting, often with shallow depth of field, can make focus very difficult. The C300 Mk II combines its new, Dual Pixel autofocus system with face tracking – which sounds like a cheesy Handycam feature, but it works extremely well. In the edit suite, I see dozens of PTCs (Pieces to Camera) ruined by bad focus, or compromised by having to be static to maintain focus. The ability for a single operator to keep a walk-and-talk sharp is not to be underestimated.

Face detection works with all faces in the frame, but determines a ‘main subject’. You can switch this subject using the Select wheel or the joystick. Interestingly, if you flip on focus magnification, it automatically zooms in on the face, wherever it is in the frame – nice.

With subjects that don’t have a face, it’s still possible to mark a subject to be tracked. This is harder for the camera to cope with, but used carefully it kinda works. If you are using the lens in manual focus, you can call up an on-screen indicator which shows whether you are in focus or not, and which way you are ‘out’. This doesn’t unfortunately, work with fully manual lenses as it requires the electronic connection to the camera.

Unfortunately, the range of Canon lenses that are fully supported by the Mk II is fairly limited. Although autofocus is fairly universal, there is a feature allowing programmable speed on focus pulls which is only available on the fully supported lenses – as is auto iris! So if you want a ‘full auto’ C300 MK II, you’ll need to use the EF-S 10-18mm, EF-S 18-55mm, EF 24-105mm, EF-S 18-135mm or the EF-S 55-250mm. Note that none of the current ‘L’ spec lenses are supported, and as we only had this better quality glass available (including those supplied by Canon) we weren’t able to test these features.

We could, however, test another couple of the newly claimed features. The high speed readout of the sensor is designed to reduce rolling shutter – and there are a couple of DiG!C DV 5 processors on-board to process and compress the data. In real-world images we were hard pressed to spot any rolling shutter at all – certainly ‘normal’ pans of moving images exhibit no signs. In lab measurements we got a figure of 1.83×10⁻⁴ degrees per pixel per second. In other words, for a vertical feature in the image to ‘lean over’ by just 1 degree, you need to be panning at about 5500 pixels per second – about 1.3 times the width of the frame at 4k. That’s the lowest that we have measured on any camera that doesn’t have a global shutter.

Canon also claim 15 stops of dynamic range from the sensor. We use a ‘real world’ measure of dynamic range – essentially filming a low contrast but richly patterned surface, evenly lit, from massively under-exposed (black) to massively over-exposed (white). We take this footage into a grading suite, and pick the exposures which we can grade to reveal rich detail at each extreme. Of course, this is subjective, but it’s the kind of subjective that DOPs and colour graders are likely to be looking at. It usually gives a value a couple of stops less than the maximum quoted by the manufacturers, and for the C300 Mk II we were happy with a value of 12 stops – perhaps 12.5. Detail was recovered very quickly at the over-exposed end of the scale, whilst the under-exposed end was limited by noise – the image detail was retained well below the level at which the noise was considered objectionable.

There is no real way to correlate our test with the waveform measurements used by Canon, but these 12 stops, whilst being well below the 15 claimed by the manufacturer, are excellent. Our test also allows us to examine the nature of the noise floor, which was not unpleasant – one of the benefits of the very high bandwidth CODEC is that noise just looks like noise and doesn’t effect the image otherwise. This also makes it easier to reduce in post-production. Note that we’re talking here about noise from very underexposed images – well lit scenes exhibit very low noise, even in shadow areas.

In fact, in general use, the pictures from the Mk II are very lovely indeed. The CODEC is completely bullet-proof – we were unable to see any obvious compression artefacts even with extreme provocation, like close-ups of water foaming over a weir. The C300 has always excelled at skin-tone reproduction and the MK II maintains that quality of tonality. Colour reproduction is superb – there are extended gamuts available including BT-2020, DCI-P3 and Canon’s own Cinema Gamut.

The big question about the Mk II is its price. Cameras like Sony’s PXW-FS7 cost under £5000 plus VAT, and offer a similar specification – at least on paper. That makes the Mk II’s £11,250 plus VAT seem extortionate. Admittedly, the FS7 really needs the optional £1300 unit – which adds timecode (vital), genlock (less so) and ProRes recording – but that’s still a massive price gap.

However, the FS7 feels slightly flimsy in comparison to the C300 – and some owner/operators have been worried about the strength of the lens mount, in comparison to the tried-and-tested EF mount on the C300. The solidity of the Canon and it’s environmental sealing, coupled with outstanding image quality, may justify the extra cost to those that can afford it. 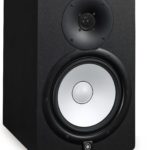 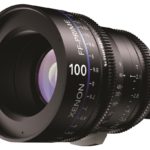